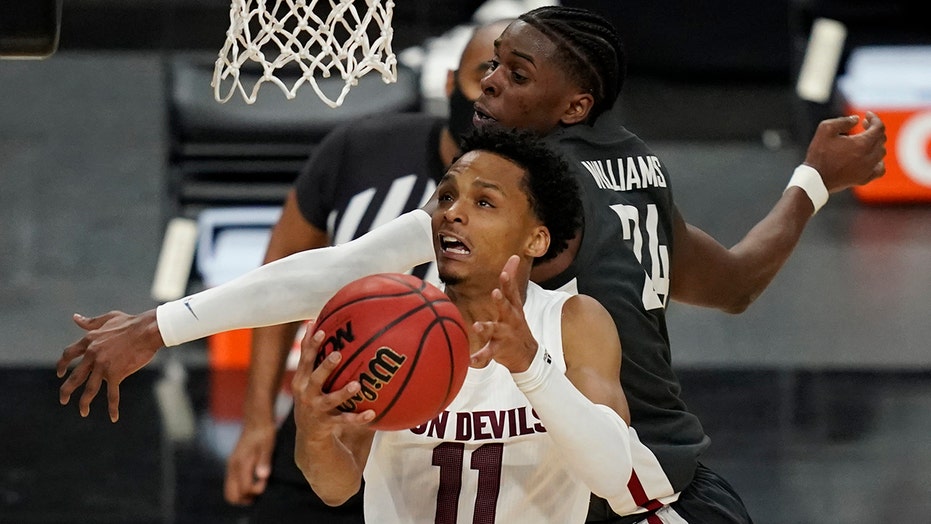 Alonzo Verge Jr. scored on a challenged drive in the lane with 11 seconds left, lifting Arizona State to a 64-59 win over Washington State in the opening round of the Pac-12 Conference tournament on Wednesday.

Verge finished with a season-high 26 points as the Sun Devils (11-13) closed the game on a 10-2 run for their second win over Washington State in less than two weeks. Arizona State beat Washington State 77-74 on Feb. 27 in Tempe.

The eighth-seeded Sun Devils face No. 1 seed Oregon in the quarterfinals on Thursday.

Isaac Bonton led Washington State (14-13) with 18 points and Noah Williams added 11. But the Cougars were sloppy all game, committing four of their 20 turnovers in the final 2:28 of the game.

Washington State led 57-54 after a pair of free throws by Williams, but Verge scored in transition on consecutive possessions to give the Sun Devils a 58-57 lead with 1:18 left.

Williams scored Washington State’s last basket with 1:11 left, but the Cougars committed a pair of turnovers on its next two possessions. Verge didn’t appear to be the primary option, but with the shot clock running down hit an awkward runner to give the Sun Devils the lead.

Washington State had one more chance but Williams was stripped from behind by Jaelen House driving to the basket. Washington State coach Kyle Smith was angered at the lack of a foul call and was assessed a technical foul, and the Sun Devils made all four free throws for the final margin.

Kimani Lawrence added 13 points for the Sun Devils, which played without Marcus Bagley and Josh Christopher, and endured a tough shooting day from leading scorer Remy Martin. Martin averaged 19.9 points during the regular season, but was 2 of 10 shooting and finished with six points.

Dishon Jackson and D.J. Rodman both added 10 points for Washington State, but the Cougars had zero points off the bench.