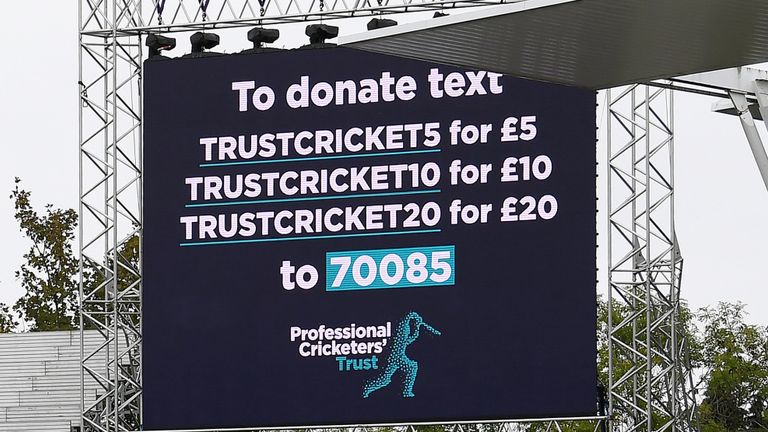 Over £15,000 was raised for the Professional Cricketers’ Trust across the weekend of Vitality Blast Finals Day, despite bad weather delaying play until Sunday afternoon.

In the absence of spectators at Edgbaston, fundraising took place via text donations, an online JustGiving page, a silent auction and a raffle.

The Trust also thanked sponsors Vitality, the ECB and Sky Sports, as well as members of the wider cricket family who helped to drive donations whilst also raising awareness of the players’ charity.

The umpires on the day sported the Trust’s logo on their caps, whilst details of how to donate were displayed on TV coverage, the big screens at Edgbaston as well as on LEDs around the boundary edge. “I would therefore like to thank Vitality, the ECB and Sky Sports for their efforts in helping to raise both funds for, and awareness of, the charity throughout this year’s Vitality Blast Finals Day.

“With the money raised, we are able to continue supporting professional cricketers in England and Wales and their immediate families for years to come, helping to safeguard our game for future generations.”

It represents a welcome boost for the Trust in a year when fundraising has been cut by over £200,000 due to much of the PCA’s annual events calendar being wiped out by Covid-19.

The cricket family had already pulled together earlier in the summer to raise over £32,000 through the #Charity10for10 campaign, whilst the fundraising efforts of Andy Moles, James Knott and the first-class umpires have highlighted the importance of the charity to those within the game. The effects of the pandemic also mean that the work of the Trust has never been more important, amid financial uncertainty caused by cuts within the game as well as short-term playing contracts.

The Professional Cricketers’ Trust is one of cricket’s leading charities. The non-profit organisation offers life-changing – and often life-saving – support to PCA members and their immediate families when they need it most.

Assistance offered by the Trust can range from emotional support right through to the provision of specialist medical equipment and more.

On the Friday before Finals Day, ex-Hampshire and Kent man David Griffiths provided a timely reminder of why the work of the Trust is so important. The charity supported Griffiths and his family as the 35-year-old flew across the world to save his sister’s life by donating a kidney.

A number of the Gloucestershire squad, who took to the field at Edgbaston on Sunday, also recently reiterated what the Trust means to them in a heartfelt interview.

There’s still time to donate to the players’ charity this Finals Day – either visit our JustGiving page or text TRUSTCRICKET10 to 70085 to donate £10.