UFC light-heavyweight Danilo Marques fought with his cup back to front – with his cornerman left to fish it out.

Marques was coming to the end of the second round against Kennedy Nzechukwu when commentators noticed the wardrobe malfunction. 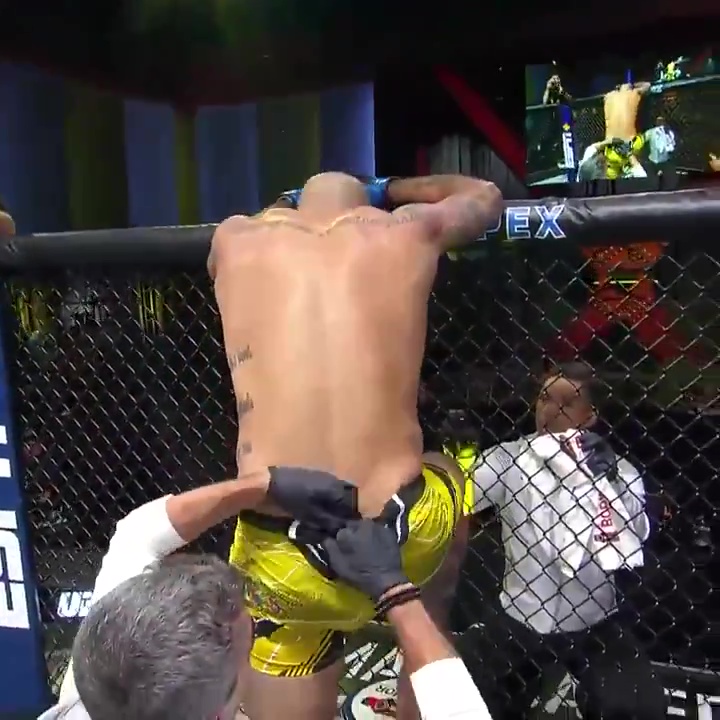 Former fighters Daniel Cormier, 42, and Paul Felder, 37, were left in hysterics during the broadcast.

When the bell sounded to close out the second, Marques was able to get back to his corner for a help in hand.

One of his corner team had to retrieve the cup from the Brazilian's backside, as ex-UFC champion Cormier said 'that's hilarious'.

Despite the fix up, things actually worsened for Marques as he was stopped the very next round.

It brought an end to hit four-fight win streak with American Nzechukwu now victorious in his last three.

Afterwards, he said: "My coaches told me on the third round to push it. Suffer now and enjoy the rest later.

"He was really exhausted after the first round so I just had to push to break him. We knew we could get that done.

"I tried to stay calm. At the same time, I knew he was going to burn his legs out, because he was constricting his legs trying to hold on to me.

"I knew it was kind of a dicey situation. I knew I could get him to burn his legs out.

"It’s not the smartest thing to do – the best thing is to stay out of that position – but I knew he was going to burn his legs out.

"And after the first round, he was limping towards his corner so I knew it was time to push the pace in the second and third round and I got the finish."