Why the Wallabies can fill the post-Olympics void

Is it me or is it that after all the excitement of the Olympics – the national flags flapping gaily, the international athletes flopping as our mob ran and swam past them – the matches of the NRL and AFL seem ever so slightly … provincial?

Yes, yes, I know the NRL, particularly, has a claim to global grandeur, what with it being played in the north of England and all! And no one will forget the wonderful prediction that no fewer than 100 million people would tune in from around the world last year – three times greater than the audience outside the USA for the Super Bowl – just to see Sonny Bill Williams come off the bench for the Roosters for 13 minutes. (I am not making that up. Look it up. That was the claim!)

But seriously, folks. You know where I am coming from, yes? I love watching league, at least when it is not 50-point blowouts, and have even come to enjoy watching AFL. But right now? After the Olympics?

It just feels a bit like some suburbs of Sydney and Melbourne are taking each other on, mixed with a few Queenslanders and other odds and sods.

But never fear. If it is genuine global sport you’re after, the rugby is here just in time! Last weekend saw the conclusion of the Lions-Springboks series, won by world champions South Africa. We will see them and Argentina in action against the Wallabies in September. Pretty global, yes, with three continents represented?

First though, the Wallabies have two more Tests against the All Blacks starting this Saturday night at Eden Park, the same place where last weekend the Wallabies scored four tries – count ’em, four! – and really gave it a shake! 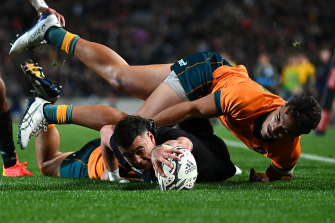 Inside-centre David Havili crashes over to score for the All Blacks on Saturday night.Credit:Getty

It is true that, on a purely mathematical basis, if you took only the scoreboard into account and ignored everything else, technically we didn’t win.

It is also true that there are 25-year-old Australian rugby supporters walking around who simply can’t remember the last time we held the Bledisloe.

Well, against that, if you made a graph of where Australian rugby was this time a year ago, compared to where it is now, it would look like a NSW COVID-19 infection graph of the past 50 days, except this time there is no catastrophe waiting for us in the higher spheres, but the Promised Land!

Look at where the Wallabies were: on the bones of their arse, with no money, no games, no administration, and no hope. Several former Wallaby captains had gone rogue, and there was the risk of outright civil war.

The administration is stable. The matches are going out on free-to-air and Stan, which is paying big bucks for the privilege. The Wallabies put the haughty and strutting Gauls to the sword in a 2-1 series win, and gave a pretty fabulous account of themselves last Saturday – notwithstanding the fact the lineouts were close to hopeless, and our kicker had a shocking day at the office, going from an average of four out of five successful kicks, to one out of five on the day.

Look at the graph! Who can dispute it is pointing up?

We now have a forward pack that competes with the All Black pack. We are even holding our own in the scrums. We’ve got a halfback in Tate McDermott who, if you look at him in silhouette as he harangues his forwards to greater efforts and darts from the base, can remind you of Nick Farr-Jones in the halcyon days. And we’ve got a back line that put on three tries in 11 minutes against the bleeding All Blacks at Eden Park!

Friends, I make no promises. But 55 years ago, in the middle of a bad drought up Peats Ridge way, I heard my father say to another local farmer, Mr Watts: “The one thing we do know Brian, is that every day brings us closer to the drought ending”. It rained cats and dogs about a week later!

Every Test is bringing us closer to the Promised Land, I tell you. And it might, just might, start this Saturday. Look at the bleeding graph, and tell me I am wrong!

Sports news, results and expert commentary. Sign up for our Sport newsletter.