Spoiler alert! Do not proceed if you have not watched Monday’s episode of 9-1-1: Lone Star.

The 126 spends their days fighting fires and dangerous emergencies, but on Monday’s 9-1-1: Lone Star, one of its own suffered a life-changing tragedy.

At the end of last week’s hour, paramedic Tommy Vega (Gina Torres) arrived home late in the evening only to discover her husband, Charles (Derek Webster), lying motionless and unconscious. The latest episode picked up immediately after that distressing moment as Tommy — stricken with a multitude of emotions, including panic and grief — unsuccessfully tried to revive her husband, who, we’d later find out, suffered an aneurysm that was nearly impossible to detect.

Doing her best to compartmentalize her emotions (and with the girls fast asleep, unaware that their father was dead), Tommy chose to keep the devastating news to herself until she got the answers she needed, only asking her friends, Judd (Jim Parrack) and Grace (Sierra McClain) — who were already suspicious that something was not right — to pick up her kids from school and look after them for the afternoon. An impromptu encounter between Tommy and Owen (Rob Lowe) at the hospital prompted the captain of the 126 to look into what was really going on, soon discovering that Tommy was quietly processing the death of her husband. When he reached out to her about her loss, Tommy finally broke down with a heart-wrenching cry at the hospital, eventually bringing Judd and Grace into the loop.

So, what does this mean for Tommy moving forward? ET spoke with Torres about season 2’s bittersweet penultimate episode, why it took her a long time to come to terms with the death of Tommy’s husband and how being a widow will change Tommy’s outlook in season 3.

ET: When were you informed that Tommy’s husband was going to die?

Gina Torres: I found out a couple of episodes ago. I want to start with the good positive news. One of the things that put this into play was the fact that Derek Webster, who plays Charles, got a job, a wonderful job that he’s excited about [Paramount+’s Mayor of Kingstown]. And we’re all excited for him because we all love it when we all get to work and do things that we love to do. So, in a weird sort of way — the scheduling of it, the new job and this job and looking for how to resolve it — gave birth to a terrible sort of solution that I wasn’t happy about. But as they were trying to figure out, “How does this really work?,” and wanting to make sure that everybody was getting what they needed, Tim called me and said, “I have this idea and I want to know what you think about it.” He said, “It’s as horrible as it is, but I’m excited about how this will open up Tommy’s world.” And I couldn’t get there then. I’m still trying to get through it because I still so loved what we had presented as a family — as this beautiful multi-ethnic family that loves each other — that struggle that I still feel we’re emblematic of what so many families were going through, particularly through the pandemic. The sacrifices of the losses and what love really looks like in play and in action. I am definitely grieving the loss of [her husband] and I will be, and I believe that Tommy will be also grieving the loss of that for some time.

This must have been a particularly difficult episode to film emotionally, as we’re seeing Tommy digest and process the immediate aftermath of Charles’ death. The grieving process is different for everyone. How did you navigatethe immediacy of Tommy’s loss?

I’m in complete agreement with you. I think studying how grief lives in people and how differently it lives in people has always been fascinating to me. I was so happy to see the choice that Tim Minear made for me and for Tommy because it made absolutely complete sense. I’ve lost both my parents, I’ve lost surrogate parents, there’s people that I have taken and just adopted along the way as mine, close friends and I completely understand how she’s wired. She takes on and she manages other people’s grief brilliantly and beautifully, and they’re sort of these stops and gaps that allow her to do her job and the fact that she falls into that so organically and so naturally in this moment in time, I just loved it. I absolutely loved it. It’s like she’s putting on her uniform in a way you don’t see. She just doesn’t have it on and she can’t allow herself to really accept the reality of what’s happening because her brain, her first responder brain is still trying to fit it and is still trying to make it OK.

What was that most difficult scene for you to film?

Jim Parrack and I have these conversations quite a bit, and I was there for him after the car crash and we had our scene together. We have those scenes and then have a little bit of a laugh, like, “God, we are sick. We are some sick people actors,” which is like we relish the idea of digging this deep and being these mirrors of humanity because that’s our job. We want you to feel, we want you to understand and connect and to let the audience know that you’re not alone. We see you and this happens. It’s a release for everybody. Going to those places, it’s hard. It’s hard and it takes us a lot. It takes a lot of energy and it takes a lot of emotional currency to get to those places, but it’s worth it. It’s worth it when it’s right. 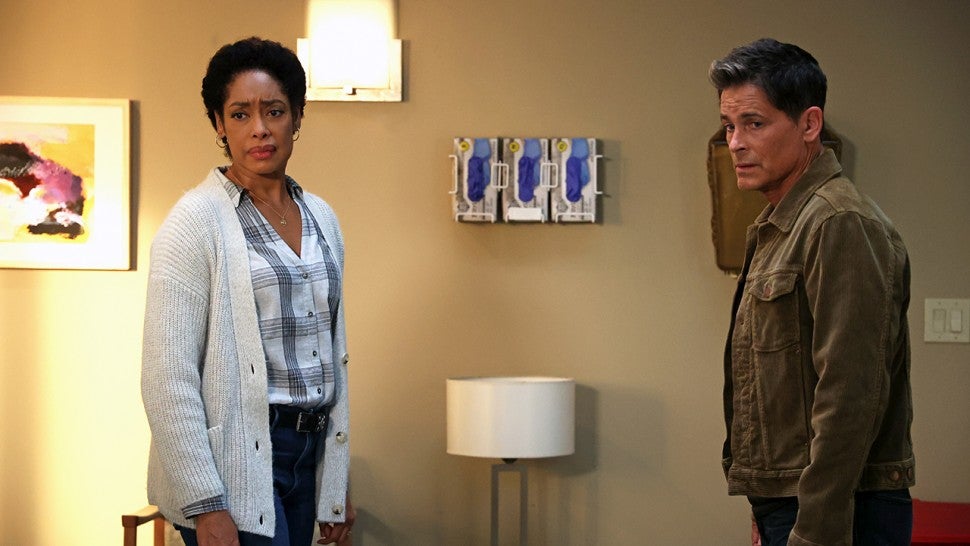 Tommy has not yet told her daughters about their father’s death. Will we see that moment? And how do you anticipate the family will be forever changed without Charles?

No, thank God that is not something I had to shoot. We were spared that. But we do get a glimpse in the season finale. We do get a little bit of a glimpse as to what her life might look like moving forward. As season finales tend to do, it packs a lot of stuff in. There’s a lot. The 126 is in transition. The last time, we saw the station house was being blow to bits. There’s Tommy’s transition from happily married to widow. Owen is coming out of the whole arson thing. And in our big, epic finale of death storms and running to the rescue ’cause it is 9-1-1 after all. So there’s a lot going on. More questions than answers, put it that way. But we got to get you back in for season 3, right?

Right now, only Owen, Judd and Grace know. How does the rest of the firehouse support Tommy?

What you will see is the 126 family coming together in a really beautiful way.

You mentioned you’re still coming to terms with Tommy being a widow now. Was there a part of you that was like, “Is there any other way?”

Of course! It is so hard to find that kind of magic. When you’re an actor, there are people that are great and professional and a lot of fun to work with and that’s cool. And I have been so very blessed to have had a long career to work with some great people, but it really is finding that right alchemy when you’re playing husband and wife. When it’s on the screen and it pops in the way that it did, there was this sweetness and this joy that doesn’t come along that often, and it’s special. Why would I be happy about letting that go? Yeah, of course. There was maybe a sick aunt that he has to go and take care of and he comes back. But again, I think it will open up Tommy’s world and it has been really exciting. We’ll get there and we’ll discover it together.

How do you think this will change her moving forward?

What we’ve learned about Tommy and what we know about Tommy is that she’s going to put those girls first. She’s going to do whatever she has to do to make sure that the lights stay on and that they get the love and the attention and the security that they need. When you’re doing that, there really isn’t — I can only say she seems to think, “I had the love of my life and I’ve now got these girls and my job.” And the minute that happens, guess who shows up…

Is there anybody in the 9-1-1 world you would like to see Tommy play off of or you personally would like to share a scene with? Peter Krause mentioned wanting to work with you if it made sense creatively…

What can we expect from the season finale?

You won’t be disappointed. It has all the things that you love and expect.

To stay up to date on breaking TV news, sign up for ET’s daily newsletter.