The BBC was praised for its “poignant” and “beautiful” coverage of the 75th anniversary of D-Day today, as Prime Minister Theresa May, French president Emmanuel Macron and a host of veterans paid their respects to the thousands who lost their lives in the Normandy beach landings on June 6, 1944.

In between the coverage BBC Breakfast presenter Naga Munchetty, 44, interviewed some of the attending veterans and guests in what were incredibly emotional scenes.

Jim Bradford was sharing his own experiences and how he copes with the memories now with the host, and he lamented that “lots of young people” know “very little” about the war now, and claimed their knowledge consists mostly of depictions in films.

“Do you feel comfortable talking about it?” Naga asked. “Because we hear so often that veterans don’t talk about that part of their lives.”

“I think that’s true,” Jim considered. “I think most of us haven’t talked about it for many years. After the war we got on with our lives and put it aside.

“And you only talk about it to other veterans because otherwise you have so much background to explain. You couldn’t talk about it easily.

“Since I retired I talk about it more and especially with the veterans’ association and the groups I’m in,” the former soldier shared. “We go into schools and talk about it.

“And the main message we’re trying to get across is, this is terrible, and we must make damn sure it never happens again. So don’t, don’t get involved in war!

“Defend yourselves by all means but don’t get involved in offensive wars because this is where it leads to,” the veteran warned.

Tearing up, Naga shook Jim’s hand and struggled to find the words. 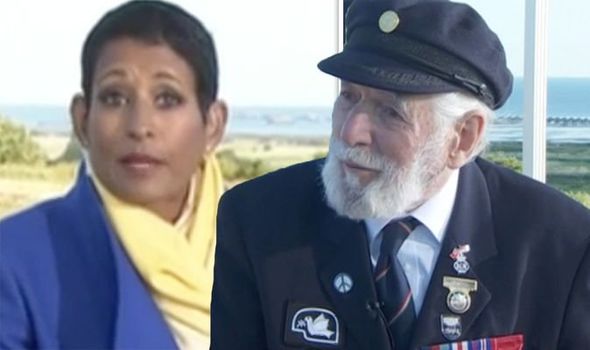 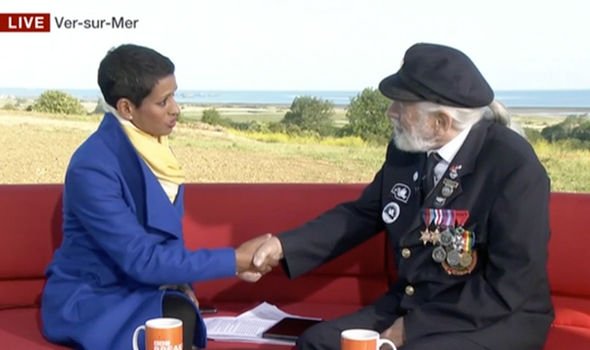 It’s an honour to talk to you

“It’s an honour to talk to you,” she said, her voice breaking.

“My pleasure,” the veteran smiled, and Naga took a deep breath as she fought to read out her next cues.

“Later this morning on BBC One there’ll be a special programme, D-Day 75, remembering the fallen,” she managed.

Later, the presenter received a hilarious warning from another veteran, George Catts.

The guest was explaining his work with young people to try and educate about the horrors and realities of war and the commission of a brand new sculpture in memoriam of the lives lost, and he said: “It’s been wonderful working with them all, because I’ve gotta say I never thought I’d get anywhere and a lot of people said I was mad to try.

“But because I’m determined I got it, here it is, and in about a year’s time it’ll be ready for everyone to come and see and remember, and I hope you’ll be here to talk to me about it. 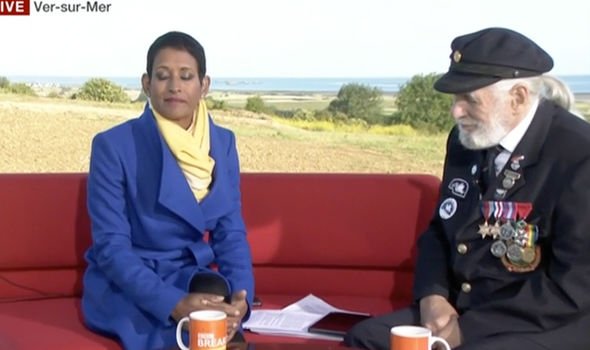 “I hope so too,” Naga replied warmly.

“Because if you’re not, there’ll be trouble,” George warned with a glint in his eye.

Returning to the seriousness of the day, Naga asked the veteran to give a message to BBC viewers.

“Well if you think on Gold Beach alone on 6th June 1944, there were 100 service people killed,” George said. “Along the beach of the three British Commonwealth beaches, there were 4,500 killed in a day.

“That’s a heck of a lot of people, and if that happens again, where are we going? You know, for pete’s sake, let’s have a bit of friendship, cooperation, and anything else throughout the world, to stop these idiotic fights.”

BBC Breakfast continues weekdays at 6am on BBC One.