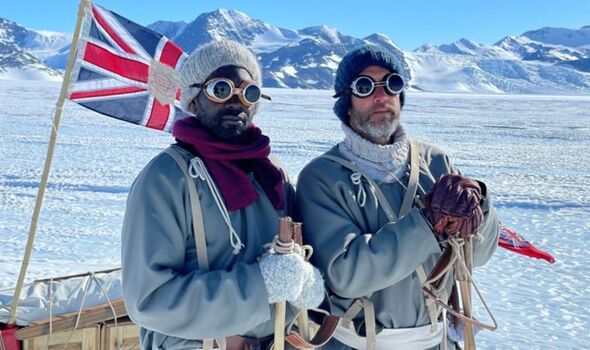 But instead of filming the feat while snug in the latest hi-tech polar gear, he is decked out in Edwardian kit.

The 49-year-old will use replica equipment, eat authentic supplies and shelter in tents of the time.

Accompanied by polar explorer Dwayne Fields, he will document the quest in Endurance: Race To The Pole on Channel 5.

Ben said the “dream project” was inspired by a lifelong fascination with the “heroics and the sacrifices made by these brave men…in one of the most unforgiving places on Earth”.

He added: “Now I get the chance to wear the same clothes, eat the same type of food, pull the same-style sled and sleep in the same canvas tent.”

Ben skied 480 miles to the South Pole in 2009. He plans to chart the “character flaws, bitter rivalries, and fatal mistakes” of his three role models.

On December 14, 1911, Norwegian Amundsen was the first man to reach the pole… 35 days ahead of Scott’s team, who died on their return.

In 1909, Shackleton got within 97 miles of the pole. Six years later he tried again, but his ship Endurance was sunk by ice, leaving its crew trapped for 10 months.