Not directly addressing Taylor’s death nor demands for accountability, former Louisville Detective Brett Hankison has been indicted for wanton endangerment in the first degree for his role in the situation surrounding the March 13 fatality. The three charges against Hankinson are actually centered on shots fired at other apartments in the complex where Taylor lived.

The relatively weak felony charge that Hankinson faces has a maximum penalty of five years behind bars. The two other cops involved in the shooting were not indicted.

Represented by civil rights lawyer Ben Crump, Taylor’s family had advocated for manslaughter charges. Crump took to social media not long after the grand jury result was made public:

In a press conference soon after the grand jury result, Kentucky’s Attorney General Daniel Cameron gave a news conference on Wednesday where he acknowledged that “not every one will be satisfied with the charges” unveiled. Shockingly, Cameron also added under questioning that he thought when it comes to the shooting at Taylor’s apartment, “it is unlikely that there will be any additional prosecutions that come from that event itself.”

The FBI is continuing to conduct its own investigation into what happened to Breonna Taylor. A ballistic report from the Bureau’s lab determined that it was a bullet from officer Myles Cosgrove that proved the fatal shot for Taylor. Local facilities in Kentucky took a different point of view and came no official conclusion on where the bullet that killed Breonna Taylor came from. 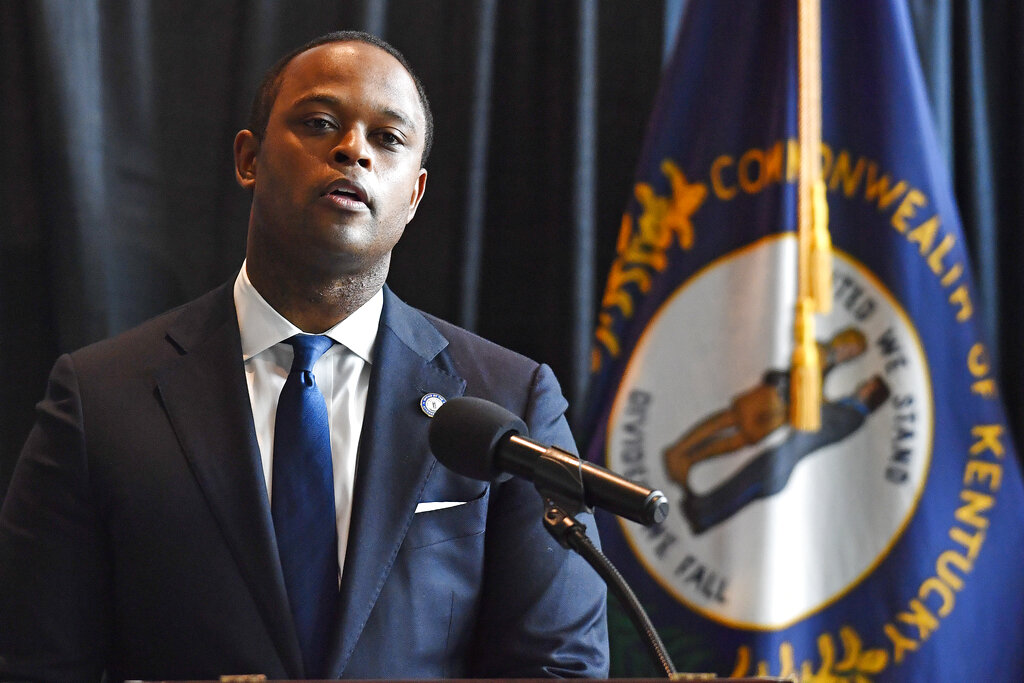 Outlining the case that was presented to the grand jury earlier this week, why it is believed Hankison’s shots never struck Taylor and why the two other officers were “justified” to fire back in perceived self defense, Cameron seems to be drawing talking points from his remarks to night 2 of the Republican National Convention in August. “Mob justice is not justice,” the state official proclaimed in pejorative and loaded language that could have been pulled straight out of a Donald Trump rally and its law and order re-election focus.

Reminiscent of the uprising and social unrest that occurred in LA in 1992 when four LAPD cops were acquitted of using excessive force against Rodney King, the city of Louisville is in near total lockdown With the metropolis under curfew tonight, the National Guard have been activated in the last hour, I am told by law enforcement.

On March 13, Louisville Metro Police Department officers Hankison, Cosgrove and Jonathan Mattingly burst the 26-year old EMT’s apartment with a no-knock search warrant at the wrong address. Since that terrible day, none of the trio have been arrested for the killing of Taylor. An outrage that has seen the likes of LeBron James, ex-VP and Presidential candidate Joe Biden and running mate Sen. Kamala Harris, Beyonce, Mrs. America star Uzo Aduba and Watchmen star Regina King, to name a few, speak out for action. Starting in July, Oprah Winfrey began conducting a high profile “Justice for Breonna” campaign.

“There will be celebrities, influencers and activists who have never lived in Kentucky who try to tell us how to feel, suggesting they understand the facts of this case, and that they know our community and the commonwealth better than we do,” rising GOP star Attorney General Cameron went on to say in what became increasingly political remarks. “But they do not.”

Telling media that he will put together a “task force” to review how the search warrant process in the state are conducted, Cameron urged the Governor and Louisville Mayor “to do what is necessary to maintain law and order.”

Though Taylor’s death occurred in the spring, it did not garner wide spread recognition until after the killing of George Floyd by Minneapolis cops on Memorial Day. In the resulting months, both cases as well as that of Ahmaud Arbery, have become touchstones in protests against systemic racism and police brutality that sparked a renewed debate over social justice in a deeply divided America this election year.

In a potential prelude for today’s grand jury result, Hankison was fired in June after the LMPD interim chief determined he used excessive “deadly force in this fashion.” Cosgrove and Mattingly, who was wounded in defensive gunshots from Taylor’s boyfriend Kenneth Walker, were both taken off the streets and put in administrative positions this spring.

After the police crashed through Taylor’s apartment door with a battering ram, Hankison fired over 10 shots into the Taylor’s residence and other homes. Taylor was killed by six bullets to her body, reports now confirm. Prior to this terrible incident and being pink slipped this summer, Hankison was disciplined previously by the LMPD last year for reckless conduct.

Hankison, Cosgrove and Mattingly were not wearing body cams and there is no video footage of their entrance into Taylor’s home and the subsequent shooting.

On September 15, the city of Louisville settled a wrongful death lawsuit from the family of Taylor for $12 million. As well, civic authorities pledged deep reaching police reforms, including greater oversight of search warrants. The settlement came after months of AG Cameron and other local leaders not meeting with the Taylor family until just last month.

All of cable newsers went live with the revelations of the grand jury today.