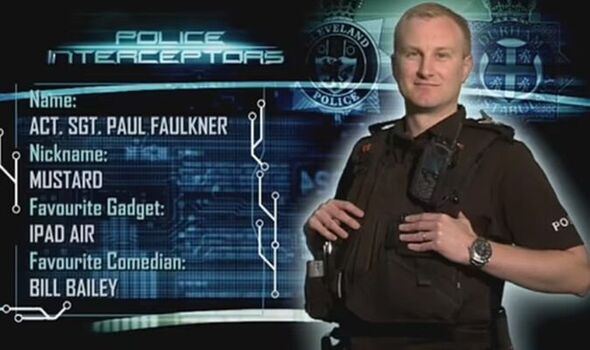 Married dad Paul Faulkner – well known to fans of Channel Five’s Police Interceptors show – instead began an affair with the constable. The relationship was described as “an unstoppable chemical reaction” but the woman now says she was “exploited”.

The hearing was told PC Faulkner was tasked with being the female constable’s representative after she was placed under investigation by her force’s watchdog.

The Cleveland officer – identified only as PC A – told the hearing in Stockton on Tees admitted beginning a consensual sexual relationship.

However the force’s barrister Olivia Checa-Dover said: “It will be for the panel to decide whether PC Faulkner’s actions were targeted and predatory.”

PC Faulkner’s barrister Michael Rawlinson insisted the relationship had been “a mutual attraction” from the start.

The officer was a star of Police Interceptors between 2015 and 2019, which followed Durham and Cleveland Road Policing Unit and where he appeared using the nickname Mustard.

In her evidence PC A frequently broke down as she described how PC Faulkner began the sexual relationship began after a meeting in a public park’s coffee shop. As they left it began to rain and they took shelter in her car, where he kissed her.

She told the hearing: “He was my Fed rep and he took advantage of me.”

PC Faulkner became the officer’s Federation rep in November 2019 as she was probed for gross misconduct.

She said: “I was not eating or sleeping, I was not being a good mum to my kids. I was diagnosed unfit for work but my relationship with Paul was developing, it was not platonic, it was emotional and sexual.

“At that time he told me he would get in trouble if the Federation found out about us. He said I should not say anything. I loved him, why would I want to get him into trouble?”

The case against PC A, an officer with 14 years’ experience, was eventually dropped and she was allowed to return to work in a new role.

Michael Rawlinson, for PC Faulkner, said he depended on their relationship as much as she had.

He said: “He’d had a very serious car accident and was suffering PTSD and you knew that and his marriage was in difficulty and he felt alone and lonely. This was a relationship of mutual support.”

He said PC A had made references to “fancying the pants off each other from the moment they met” and messaged PC Faulkner to say: “We tried to stop it. We couldn’t stop the chemical reaction or attraction.”

PC Faulkner admits having the relationship with PC A but says it does not amount to a breach of police conduct.

He admits lying to Police Federation officials when he was challenged about their affair in May 2021 and admits that amounted to misconduct, but not gross misconduct.