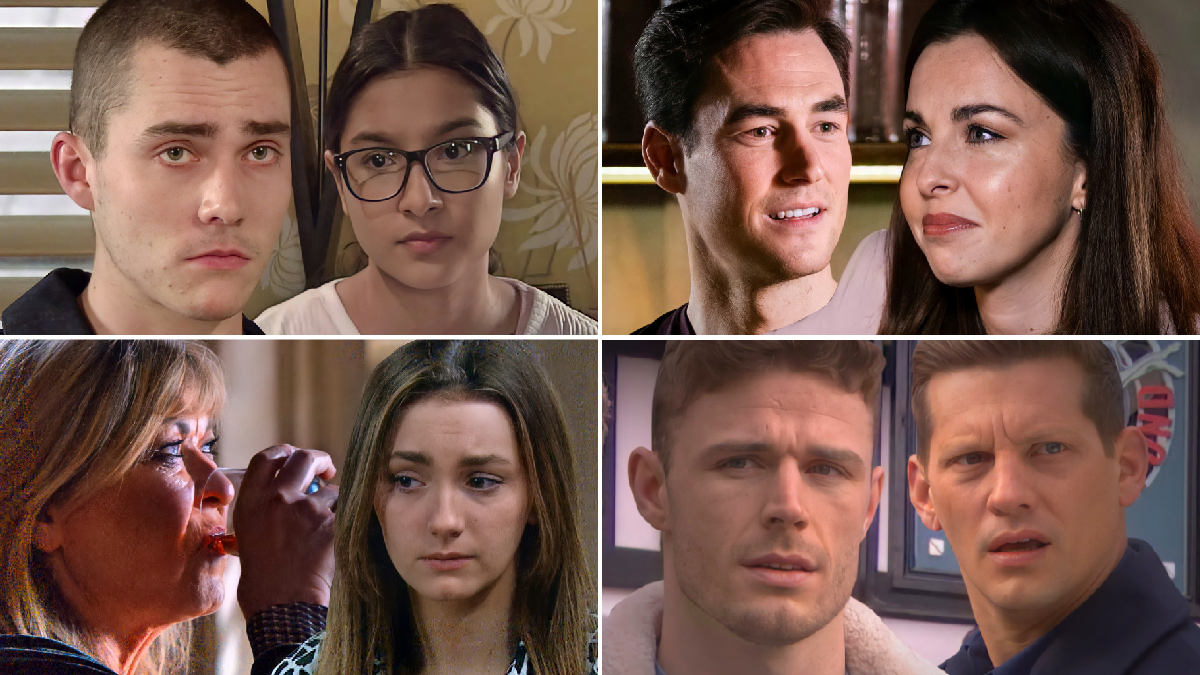 Fancy some more soap spoilers to tide you over until next week?

It’s a big week for our Coronation Street favourites – mind you, when isn’t it a big week these days?! – as Sharon Bentley (Tracie Bennett) takes sickening action in order to get Harvey Gaskell (Will Mellor) what he’s after.

Over in Walford, Martin Fowler (James Bye) is given reason to believe wife Ruby Allen (Louisa Lytton) has cheated on him with dashing Zac Hudson (James Farrar) but is all as it seems for the EastEnders legend?

Gabby Thomas (Rosie Bentham), meanwhile, is busted for her scheming in Emmerdale, while George Kiss’ (Callum Kerr) killer is at long last revealed in Hollyoaks.

And that’s just the tip of the iceberg, as they say!

1. Sharon tells Harvey that she’s planning on finding out Simon’s gamertag so that she can trace him via that. She forms a plan, and invites Dev to share a bottle of wine with her. The following day, she informs Dev that she thinks she lost an earring at his, and – much to her surprise – he hands over the keys so that she can look. While at the house, she messages Simon via Aadi’s console, but will he take the bait?

2. Natasha confiscates Sam’s phone when she realises he’s been in touch with Nick. Sharon, meanwhile, tips off Harvey about Sam’s movements – and he his sidekick Noddy later lures the little lad into a van. The door slams shut, terrifying Sam. Sharon watches from afar, realising that she’s done the unthinkable in setting this in motion.

3. Jenny is uncomfortable when Johnny quizzes her about their new B&B guest. Ronnie, meanwhile, takes Jenny for a ride in Ed’s camper van and, afterwards, the chemistry between them is electric. After Ronnie’s wife Kat shows up, Jenny reckons it’s time he moved out – but Ronnie begs her for another chance. Jenny soon has other things on her mind, however, as Johnny arrives home!

4. Aadi’s intrigued by Asha’s desire to defend Corey, but Asha clarifies things for him, explaining that she despises Corey – and reckons that he’s guilty as sin. As a result, she’s pretending to be on his side, so that she’ll be there if he slips up – meaning that she’ll be able to get the truth.

5. Roy is concerned when he finds a bin bag full of Nina’s dresses. Asha offers to look after them in the hope that Nina will change her mind, an act which leaves Roy feeling very grateful.

6. Alina admits to Tyrone that she’s simply not ready to move out of the salon flat, as it reminds her of Seb, and she finds that comforting. Tyrone understands completely, but he’s worried when Debbie reveals that she’s selling said flat – and offers him first refusal. Fiz gets wind of the fact that Ty is contemplating buying the flat, but how will she react?

7. Sean refuses to set mate Carol up with Double Glammy, and Carol reckons this is because he doesn’t think she’s good enough. But is there more to his refusal than meets the eye?

7. Mick sets about writing his victim impact statement ahead of the court case, but little does he know that Katy has arrived back in Walford. Frankie soon finds out, however, and emotions run high when Shirley claims that Mick’s statement will be enough to put Katy away. Frankie crosses paths with her mum, who asks for her to provide a character reference. She claims that she turned down Katy’s request, leaving Shirley proud of her loyalty, but she’s evidently conflicted.

8. Mick tells Linda that he must tell his truth and read his victim impact statement. The day of the court case later arrives, and the Carter clan are all dressed for court. The question is: what will transpire?

9. A mystery man named Terry bumps into Rainie at the Tube station, and asks for directions to Albert Square. At Ruby’s, he entertains a crowd, when Sonia shows up and berates Dotty for hostessing and speaking to old men! Sonia later comes into contact with Terry once more at The Vic, and – mortified – she disappears.Terry approaches Denise and Tiffany, explaining that he’s Sonia’s dad!

10. Isaac takes Bailey and Keegan out for a meal, and he’s later joined by Sheree and Lola. As he starts to tell a story, he freezes suddenly, leaving Sheree and Lola concerned.

11. Martin receives quite the shock when he arrives at the club to find Zack flirting with Ruby. Troublemaker Zack later flirts with Ruby once more – this time in front of Martin and Lily! Lily wastes little time in asking Ruby if she fancies Zack! Ruby is taken aback, and tells the young girl to mind her own business and stay out of it! Lily then informs Martin that – while he was away – Ruby spent a lot of time with Zack, and even had him spend the night!

12. Molly wants to take Bernie on holiday, prompting Bernie to come clean about both her money woes and her surrogacy plans. Molly is taken aback, snd wonders what Karen makes of her daughter’s idea, but she’s left in shock when she realises Karen doesn’t know anything. She pleads with Bernie to forget the surrogacy for the sake of their relationship.

13. Mitch breaks down, reassuring Bailey that he has his job back. Bernie adds that she’s expecting a bonus, which piques Karen’s interest. She quizzes her daughter on the matter, leafing to Bernie making up an excuse.

14. Nancy arrives at the Vic, claiming that she is enjoying living with Sharon. However, when she realises Linda is not there, she comes clean – admitting they she hates it. However, she still doesn’t want to come home.

15. Liv continues to drink, feeling guilty over what happened with Paul. She heads to the pub, when she meets a sleazy stranger named Max, who she invites back home. Liv is increasingly uncomfortable in Max’s company, but Aaron intervenes – leaving her upset. Chas decides to step up, as she arrives, locks the door and steals Liv’s phone – putting the young woman under house arrest until she sobers up.

16. Kim decides to make an appointment for a proper dementia test. Gabby, however, spots the appointment in Kim’s notebook, and encourages her to keep it a secret from Jamie. A mystery figure later laces the brandy decanter with diazepam, and Kim pours herself another glass. As the day of her dementia test arrives, she’s terrified of going alone, and Jamie is appalled to discover that Gabby knew before he did.

17. Noah spies on Gabby, leaving her alarmed. Gabby is later outed for her meddling, but how will Kim react?

18. Amy blurts out that she loves Matty, but she doesn’t get the response she was hoping for. She’s left mortified in the aftermath of the revelation, but will the pair be able to resolve things?

19. Ben opens up to Victoria, and it’s clear that he’s not as over Aaron as he claims to be.

20. Ethan tells Charles he’s going to stop searching for his mum and live his life.

22. One resident tries to cover their tracks, but their attempt to do so ultimately leads the police straight to the murder weapon! The walls soon close in, and flashbacks take us back to the scene of the crime on the night of George’s murder, as new information at last reveals what really happened. Afterwards, the hour of reckoning comes for the killer, as they prepare to come clean and reveal the truth.

23. Ste worries that James’ feelings for John Paul could be reignited given that they’re working so closely together. James agrees to take a step back and not work on the case any more. However, he soon goes back on his word, as he assists Theresa. Leah, however, overhears a conversation, and realises that James has lied to Ste! Ste is livid when he finds out that James went behind his back, and wastes little time in confronting him.

24. Darren – desperate to get out of the friend zone – decides to tell Nancy just how he feels about her. He’s interrupted by Brooke, but Nancy nonetheless discovers what it was that he was going to tell her! Nancy later stands Darren up, and Celeste offers to keep him company.

25. Juliet and Peri take the next big step in their relationship, as they move in together.