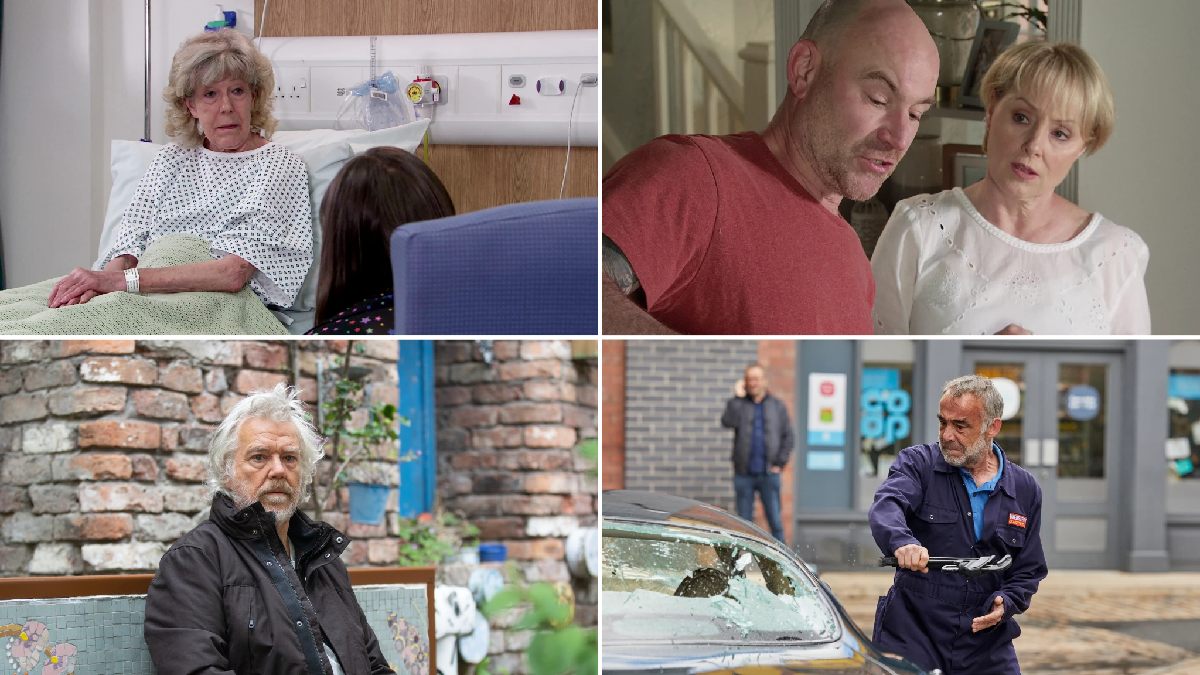 Kevin Webster (Michael Le Vell) is having a smashing time in Coronation Street, as a feud with Stephen (Todd Boyce) explodes.

With the men at war, Kevin attacks his car but when the police become involved, Kev realises he might have wrecked his future with Abi (Sally Carman) and Abi.

Elsewhere, Stu’s (Bill Fellows) past is a cause for concern for Yasmeen Nazir (Shelley King), especially when her friend snaps at her out of nowhere.

What is he trying to stop her from finding out?

Stu is furious and berates Yasmeen for interfering when he discovers that she has found Bridget’s address. But when Kelly urges him to try and make contact with Bridget, Stu decides to give it a try. Stu arrives at Bridget’s address and knocks on the door but she panics and orders him to leave. Stu begs her to hear him out and assures her that he never hurt anyone.

Stu apologises to Yasmeen for snapping and says it was the wrong address  – what is he hiding? Meanwhile Stephen flirts with Yasmeen but she makes it clear to Stu that it is him she is interested in not Stephen.

Kevin wants to attend Jack’s end of year presentation but Tyrone says that Stephen’s Jag needs sorting first. Meanwhile at school Jack is being bullied and called ‘Spanner’ for having two dads who are mechanics. In the garage, Kevin takes a call from school and heads out with a face like thunder. Kevin is shocked to find out that Jack punched Nathan.

Jack explains how Nathan ridiculed him having found out that Tyrone initially thought he was his Dad. Realising that Kevin’s got a lot on his plate, Aaron offers to take over the work on Stephen’s car and Kevin’s grateful. At No.13, Jack rows with Kevin and admits that he’s not looking forward to Abi’s return as he barely has any time for him as it is.

Phill finally hands Fiz the signed annulment for. After a celebratory dinner the family return home Hope opens her tablet to see a string of messages from a player called Mad Dog. Using their walkie-talkies, Hope and Sam discuss Mad Dog and Sam reckons he fancies her.

Summer tells a disappointed Billy that she is definitely not going to Uni and is going to look for a job. Jacob offers to put in a good word for her at the factory and Carla interviews her and offers her the job as PA.

Becky, the hospital psychiatry liaison officer, visits Audrey and gently quizzes her about why she took so many sleeping pills. As Audrey heads out of the hospital, she’s delighted to take a call from Stephen informing her that he’s back.   In the Rovers, Sarah’s concerned when Ed lets slip that he saw Audrey at the hospital.

Chloe the social worker visits Kevin to question him about Abi and Alfie, Jack is sullen as Kevin tries to impress her. Stephen picks up his car after Aaron fixes it but is soon back shouting the odds as the car breaks down.

As Aaron takes a call and has to rush off Kevin is left to deal with Stephen. As Kevin sets about fixing Stephen’s car, first Jack, then Abi, call his mobile and Stephen threatens to take his business elsewhere.

The pressure finally getting to him, Kevin loses his temper and picking up a wrench, starts smashing up Stephen’s car. Abi calls at No.13 and flinging her arms round Kevin, tells him how much she’s looking forward to moving back home tomorrow. Kevin masks his anxiety.

A nervous Summer starts work at the factory.  Beth makes snide remarks while Sally does her best to put Summer at her ease. Aaron tells Summer that he was jumped on by some lads on his way home and shows her his bruises.  Summer is shocked.

When Glen, an old friend, calls into Speed Daal, Stu’s delighted to see him. Glen admits he’s hungry but short of money. Yasmeen pretends not to notice as Stu takes a £20 note from his pocket and places it in the till. Yasmeen compliments Stu on his kindness. When Stu suggests that they sell all the restaurant leftovers at a knockdown price to people in need, Yasmeen thinks it’s a wonderful idea. Stu calls a meeting with Dev, Billy, Chesney, Nina and Yasmeen to discuss their leftover food plans.

In the bistro, an apologetic Audrey tells Nick that she’s sorry for messing them all around as she knows they meant well, but she really doesn’t want to reopen the salon.

When Debbie admits that she’s struggling to raise the money for Ed, Ronnie suggests she should do themed nights at the bistro. As Debbie puts up her posters advertising ‘Psychic Night’ and ‘Casino Night’ outside the bistro, Leanne’s disapproving.

Sally’s exhausted after putting up with another night of Tim’s tossing and turning. When Tim suggests they attend the ‘Casino Night’ at the bistro and dress up for the occasion, Sally’s thrilled at the idea.

As Kevin prepares for Abi’s homecoming he is shocked to come face to face with two police officers at the door. Can Kevin keep what happened from Abi?

Summer and Aaron have an evening alone but when Aaron makes a move Summer pushes him away and orders him to leave. Later Summer meets up with Aaron in Victoria Garden and admits that she really likes him but can’t bear the thought of him seeing her naked body. How will he react?

As Debbie and Ronnie set up the bistro for ‘Psychic Night’, Leanne worries that they’re simply conning vulnerable people out of their hard-earned cash. Debbie admits to Ronnie the extent of her financial problems and the fact she’s left with two options; bankruptcy or an insurance job. Ronnie assures her it won’t come to that. When Debbie hears Ryan telling the psychic that he skint and has debt coming out of his ears she hatches a plan.