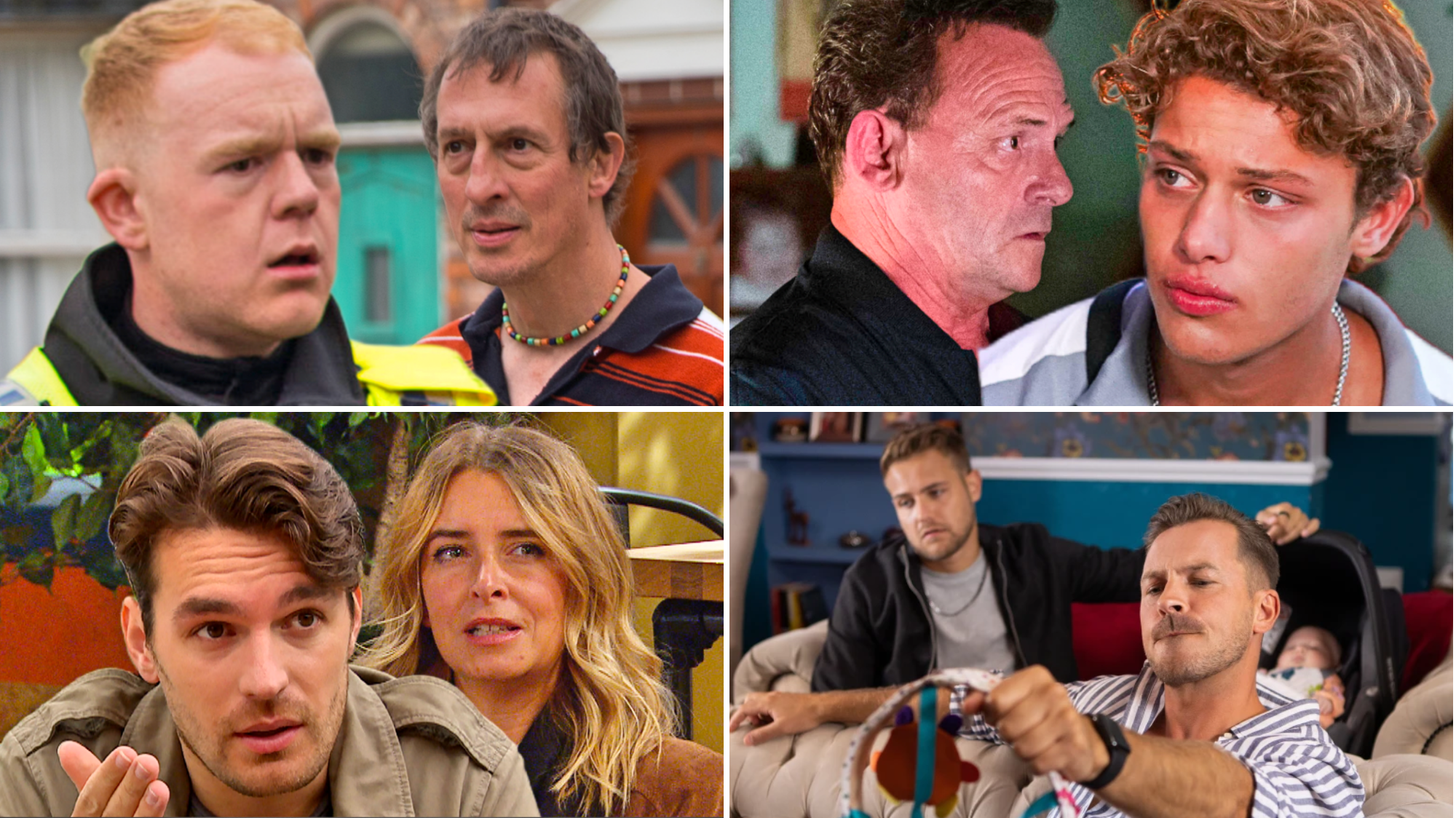 Autumn is set to get off to a remarkable start in the land of soap next week, with some huge developments across all of the nation’s biggest serial dramas.

EastEnders is, again, the one to watch, as the BBC One soap takes us back in time for a very special episode that will see the Mitchells like we’ve never seen them before.

This is just the beginning of what promises to be an exciting and unmissable period for the beloved show, so you simply won’t want to miss a single second from here on out!

Coronation Street, meanwhile, sees a horrifying protest break out on the cobbles, With Craig Tinker injured amid all the drama.

Mackenzie Boyd, over in Emmerdale, is riddled with guilt after he cheated on Charity Dingle, but will we finally find out just who it is that he slept with?

And last but certainly not least, we’ve got Hollyoaks, which is gearing up for an equally exciting autumn, as Silas Blissett makes his presence felt once again.

The soaps are all appointment viewing this fall, so now is the time to start tuning in again. Don’t believe us? That’s fine – we like to let the content to do the talking, so feel free to take a look at a little taste of what’s in store for you next week.

1. A major protest takes place outside the factory, as Nadeem arrives. Carla, having been warned about his practices by concerned neighbours, tells him that the deal is off. Craig, meanwhile, urges the protestors to disperse, but Griff rallies the crowd, and Spider watches in horror as Griff pulls out a bottle and hurls it, hitting Craig on the skull!

2. Stephen is shaken when wife Gabrielle arrives on the street, telling him she wants the money back that he stole from her company. If he fails to return what’s hers, then she threatens to go to the police! Later, Stephen practises Audrey’s signature – but Audrey soon shows up. Has she caught Stephen in the act?

3. The pubs charity football match kicks off, and the Flying Horse take the lead over the Rovers. With only minutes remaining, James gives the game his all, putting the Rovers at front and centre where it belongs. Things, however, take a shock turn, as James suddenly he collapses! Ed rushes across the pitch frantically calling an ambulance, while Michael performs CPR on his brother.

4. Spider begs Toyah to cut ties with Griff, before admitting that he’s in love with her and his marriage is over. They subsequently kiss on the balcony, before agreeing to keep their relationship under wraps until after the trial. Little do they know, however, that a furious Saira has spotted them.

5. In a bid to impress Jalena, Sam turns up to her party sporting a football top and trainers. Jalena reveals she has no interest in football and was going to suggest they meet up for a game of chess, but now he’s into football she’s invited John instead. Sam’s crushed.

6. Stu is harassed by a number of lads in the street, who brand him a murderer.

7. With Liam and Jake fighting over the Xbox, Kelly suggests they watch videos on her laptop instead. But when they spot that she has been researching Gretna Green, she quickly changes the subject. Having heard about Gretna Green, Maria’s adamant they need to put a stop to Kelly’s crazy plan.

8. Phil is left in total shock to find out just who it is that Keeble wants him to inform on. Keeble’s putting the pressure on Phil, and with her obsession increasing, will we finally find out the reason why she’s got such a vendetta against the Mitchells?

9. Viewers are transported back in time to 1979, where they will find out about the Mitchell’s chequered past in a special flashback episode that sees the serial’s signature clan hit hard by Britain in economic turmoil. Peggy will be at the centre of the tale, as she struggles to keep her marriage afloat while looking after her family. Eric, meanwhile, will take Phil and Grant out on their first dodgy deal.

10. Freddie Slater makes his debut, and he causes quite the stir, helping himself to a bap from Stacey’s stall without paying! Bobby spots Freddie by the tube and takes pity on him, covering his tube fare. Billy, meanwhile, sees Freddie, and he sets out to call the police on him. That is, until Freddie introduces himself as his son!

11.  Frankie’s feeling a little happier after an upsetting experience on her first day as a teaching assistant, but things take a turn when a stranger hassles her on the dance floor, before trying to kiss her. She leaves early, refusing Lola’s offer to accompany her home and makes a panicked exit from the tube. She is followed home, and later accosted by the man from the club. Trapped until a passer-by intervenes, Frankie manages to escape.

12. Janine does her best to provoke Linda, but Linda rises above it. Mick lets Linda say goodnight to baby Annie and she is delighted as a result.

13. Sharon invites a man named Matt back to her place, but her feelings for Phil leave her confused.

14. Honey overhears a heated exchange between Billy and Phil, and Billy takes his opportunity to ask her for a drink. What will she have to say?

15. With her plan to break Liv and Vinny apart having failed, Sandra plots to disrupt Liv’s sobriety, taking the opportunity to sneakily switch Liv’s drink for an alcoholic one! Liv recoils in horror when she takes her first sip, flagging her discovery to Bob, who is mortified. Liv worries that the door to her alcoholism has been opened. Sandra, meanwhile, is delighted.

16. Faith is scared of having to relinquish control of her own life, wanting Cain to have lasting power of attorney after she decides on a DNR. The stress of the situation leads her to believe that Cain is actuality Shadrach, and she soon brandishes a frying pan, screaming for him to get away from her.

17. Al tells Chas that he’s in love with her. Chas retreats, but after Al professes his love once more, she realises she’s starting to fall for him.

18. Mack’s guilty when he receives another message from a mystery number telling him their secret’s safe. Nate is shaken when Mack reveals he’s cheated on Charity with someone local.

19. Nicola is close to tears when Harriet tells her there isn’t enough to prosecute Naomi, who still hasn’t come clean about her involvement in the attack. Charles is stunned when Nicola chastises him for his daughter’s actions and he’s horrified by Nicola’s threat to end both his and Manpreet’s career. Nate, meanwhile, ends things with Naomi.

20. Kim prepares to reconnect with Millie but this leaves Clemmie worried.

21. Ella becomes convinced that Charlie doesn’t fancy her, after he suggests that they keep their relationship fun. Leah, however, gives her some encouragement, and afterwards, Ella decides to send Charlie a selfie. She has second thoughts, and thus ask Charlie to delete the picture, but it later leaks online.

22. Darren gets Ethan round under the pretence of having a day of gaming but it’s actually to look after the babies again.

23. Mercedes’ worst fears come true: Silas is back! The landlady turns to Sam, begging him for an update on Silas, and the policeman puts her mind at rest when he reveals that the killer has been arrested. Mercedes, however, isn’t finished, as she plans to end this drama once and for all, but as she approaches Silas – who is being transported to a police van – she realises that it’s an imposter!

24. Sienna fills Liberty in on her plan to expose Joel. Liberty, however, warns Joel of her sister’s plot, urging him to come clean to Warren. Joel takes it upon himself to do just that, but before he can reveal all, Warren offers him a partnership in the garage! Sienna, meanwhile, puts her plan in motion on what would’ve been Brody’s 30th birthday.

25. Leah launches a Free DeMarcus campaign, and Yazz offers her some advice.