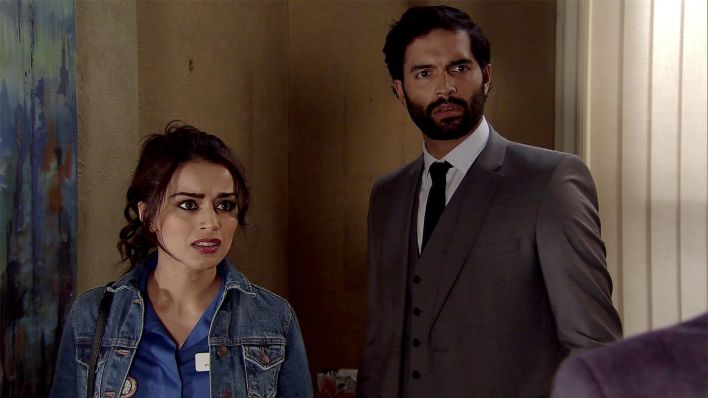 Coronation Street broke its own long held rule that a killer will get their comeuppance when it came to Gary Windass (Mikey North) – but many fans will never forget that his factory sabotage killed nurse Rana Habeeb on her wedding day.

Rana, played by Bhavna Limbachia, was getting married to long term love Kate Connor but tragedy struck when the roof of Underworld collapsed.

The family was rocked and brother Imran wanted answers – but, following his own death this week, he will never get them.

So why is that? Well, departing star Charlie de Melo has explained that the redemption arc for killer turned local hero Gary wouldn’t have allowed for it.

Telling us that when he initially considered leaving over two years ago, he wanted a scene of Imran discovering the truth, the actor said: ‘I told Georgia [Taylor, who plays Toyah] that I was going to leave before I ever told Corrie as I wanted to make sure that she knew first and that she could get her ducks in a row she needed to.

‘And I said to her I’ve been daydreaming about what that final scene will be. And in my head what it was, was at some point somehow Imran finding out about Gary’s responsibility for the factory collapse, inviting him to the roof for some sort of conversation.

‘It being pouring down with rain, and Gary climbing up the ladder and seeing Imran there holding whatever piece of evidence he’s got. And then a sort of scuffle at the top and Gary having Imran banged to rights across the thing – then just letting go and then having him fall and that’s the final loose end tied up there.’

Honestly, we would have watched the hell out of that. But it wasn’t to be…

He reflected: ‘But that would have flown in the face of the very well done and very well put together redemption of Gary Windass they’ve been working on, so that couldn’t possibly have worked.’

Gary has since got more blood on his hands, having killed gangster Rick Neelan.
He was also involved in a dramatic Christmas shootout on the cobbles in which two people were killed.

And now that Imran has joined the many lost characters, he will never get to have that final showdown with Gary.

If indeed he is ever found out…