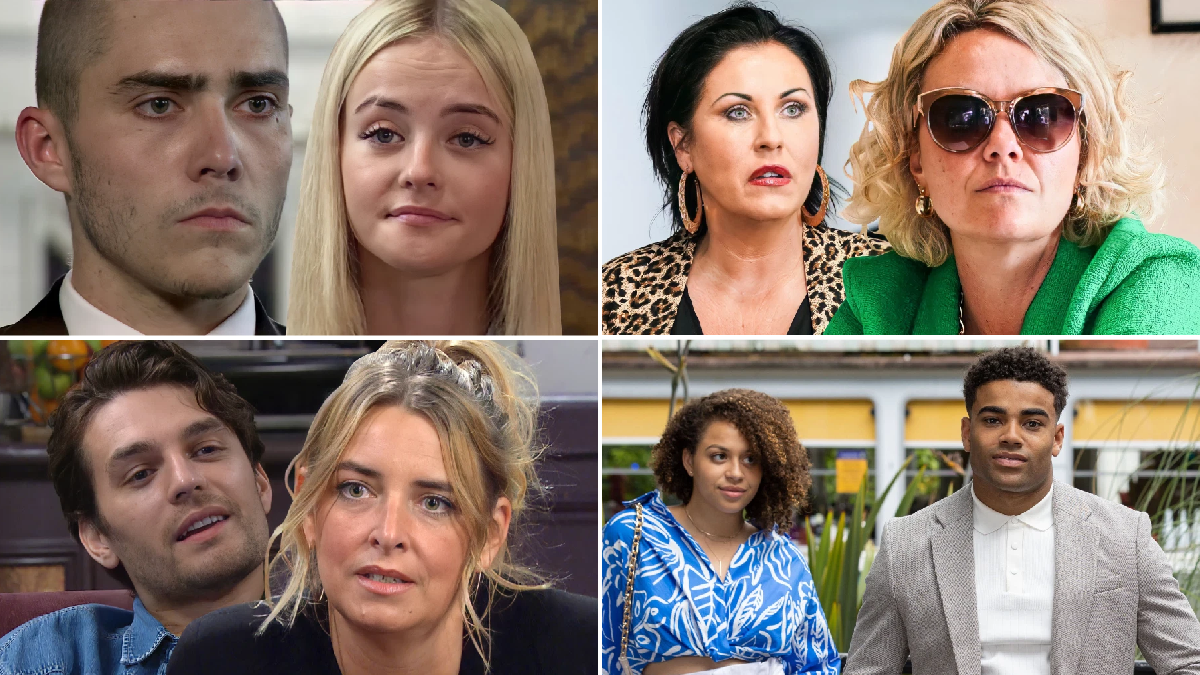 If you’re a fan of the nation’s biggest soaps – and let’s be honest, who isn’t? – then next week is one you’re certainly not going to want to miss!

The trial that has everyone talking concludes in Coronation Street, as the jury reaches a decision about the fates of Corey Brent and Kelly Neelan, while the moment we’ve all been waiting for arrives in EastEnders, as Janine Butcher is back!

No, you’re not dreaming, this is very much a reality!

Over in Emmerdale, Cathy Hope feels awful for trolling April, while Wendy Posner and Victoria Barton are taken hostage by vile Russ in a dramatic siege.

Hollyoaks, meanwhile, sees the return of Prince McQueen, the introduction of a number of new characters, an appearance from Superstar hitmaker Jamelia, and the soap’s unmissable Black to Front episode.

What a week, eh? If you’re desperate to know more about what’s coming up, then strap in, as we’ve picked out a whopping 25 moments to look out for.

1. Kelly takes the witness box and tells the court how Corey attacked Seb and kicked him repeatedly. She explains that she begged him to stop. Sabeen, however, challenges her version of events, suggesting that she attacked Seb in order to impress Corey.

2. Laura takes the stand, and claims Kelly is a model daughter, reiterating that she would never have hurt Seb. The question is: Has she done enough for Kelly?

3. The trial approaches its conclusion, and Imran and Sabeen deliver their closing speeches. Abi yells at the jury to not to believe Corey. Imran is still fighting to prove Kelly’s innocence while the jury deliberates. Abi is desperate to unmask Corey for the killer he is, intent on finding some hard proof that Stefan bribed a witness. Before long, the verdict is in. But what say the jury?

4. The residents of the cobbles discuss the verdict, and soon enough there is some shocking news from the prison.

5. Chesney is not too pleased to discover that Hope is going back to school! He makes it clear he doesn’t want her anywhere near Joseph. When Tyrone reveals that Alina’s booked them a trip to Romania, Fiz asserts he should go as he deserves a break. Tyrone’s not so sure.

6. Eileen reads the eulogy that she’s written for Patsy. George, unwilling to go along with this charade, reveals the awful truth: the ashes are actually Phelan’s! She is livid and runs off, ordering Todd to stay out of her sight. George apologises to Eileen. Eileen forgives him, but when George suggests they give their relationship another go, will she be tempted?

7. Emma confides in Steve that Curtis has failed to turn up and she’s worried he might have collapsed again. But in the Rovers, Curtis drowning his sorrows alone. Emma and Steve find find him. Steve gives him a piece of his mind for messing his daughter around. Curtis apologises to Emma, explaining that he wishes the hospital would give him a proper diagnosis as the not-knowing is driving him mad.

8. Kat realises that honesty is the best policy, and thus she sits Tommy down, and explains hat Alfie isn’t actually his dad, but rather Michael Moon is, which makes he and Scarlett brother and sister! Tommy, is shocked, but insists that this is all the more reason to help Scarlett.

9. Kat shows up at the courthouse, informing the social worker that she wants to become Scarlett’s carer, telling her that it’s for the best that Scarlett never see real mum Janine again. Janine bursts in, just as Kat is about to tell Scarlett the truth about Tommy! Janine lays it on thick, delivering a convincing testimony about how she has redeemed herself over the years. And before long, she’s back in Walford, as she storms into The Vic, bold as brass, and wastes little time in telling all the punters exactly what she thinks of them!

10. Things take a devastating turn when Scarlett vanishes, but Janine later finds both she and Tommy in Phil’s home, just as a deadly blaze starts!

11. Linda starts to feel guilty after encountering Rainie, who is missing Abi. She attempts to make Rainie feel better, but soon starts to worry that she might work out the truth. Her fears are seemingly realised when Vi comments how ‘big’ Linda is looking for how far along she is, which gets Rainie thinking. Rainie pops round to see Linda for a cuppa, but when she spots the landlady’s bag, she proceeds to hunt through it.

12. Jean returns to the Square, and she’s shocked to discover that the marijuana in the garage didn’t die whilst Jean was away as she planned, it’s grown more than ever, she has no idea what to do with a huge tropical drugs den!

13. Ruby confronts Jean, but she’s soon distracted by the smell at No. 31. Jean ignores her, but Ruby knows full well she’s hiding something, and when Martin reveals that Lily got caught selling weed at school, she puts two and two together. Jean, meanwhile, is shocked that Ruby hasn’t come clean about her role in Stacey’s imprisonment. She vows to do so herself, forcing Ruby to take action.

14. Gray is desperate for cash, and uses a burner phone to send money. Shirley later sees a text message from Tina, who claims she wants cash.

15. Wendy realises that Russ is much more dangerous than she initially thought. Desperate to protect Victoria, she urges her to hand over the money to Russ, but her conscience soon gets the better of her, as she tells Victoria to not give him a penny, explaining all there is to know about the man in question! Vic is disgusted, but before she can do anything, Russ shows up at the Hide with a sawn-off shotgun! He points the weapon at Victoria and, later, a shot rings out.

16. Leyla is determined to cope alone, and thus she has Wendy check her out at the surgery. Liam, however, comes to realise there is more going on than meets the eye when Priya acts suspiciously at the mention of his wife’s name, and therefore he confronts Leyla. Leyla admits that she had a miscarriage and lost their baby.

17. April realises that her number has been posted online, and thus she comes to believe that she knows her bully. Cathy becomes increasingly worried, and when she sees first-hand how much the trolling has impacted April, she’s riddled with guilty, confessing to Heath that she is responsible!

18. Charity orders Mack to put Diane off the scent of their affair, and therefore he starts to flirt with Bernice! But will his play pay off?

19. Kim is left in shock when she discovers that Jamie is living up at Home Farm, after manipulating Gabby into forgiving him.

20. Tracy warns Nate to not expect an instant fix, but he reveals he’s proud of how she’s working through everything.

21. After Misbah is sued for gross misconduct at work, she confides in Shaq about how she feels as though her life is starting to fall apart. Shaq offers her words of encouragement, forcing her to confront Ali. But a shock revelation threatens to tear the Maalik clan apart, as Verity is in the hot seat, and Misbah has a confession to make!

22. Goldie is upset that she missed a call from Prince, but she’s later left speechless when he makes an impromptu return to the village! The McQueens are delighted to have him back in the fold, but it soon comes to light that he’s got a secret. He’s got a fiancé named Olivia!

23. The Deverauxs celebrate Walter’s birthday together with a barbecue in a special episode that will air as part of Channel 4’s Black to Front Project, and a series of surprise guests are present. Felix, meanwhile, returns to the village, hellbent on winning back Martine. What he doesn’t expect, however, is for son DeMarcus to show up! One thing leads to another, and an accident ensues, which could have deadly consequences!

24. Verity wants to put a regretful night behind her, and moves forward with Sami, even suggesting that they move out of the Maalik household, but a shock confession from Theresa leads to a confrontation before dinner!

25. Peri buys a scarf for Marnie, but later receives an anonymous gift of her own. Juliet jumps to conclusions, thinking the bigger gift is for Marnie, which leaves Peri with a difficult decision to make. Before long, it’s made clear that Peri’s anonymous gift was from Timmy.