Dancing With the Stars Finale Recap: Did the Right Couple Win Season 30?

After 10 weeks of theme nights, Tyra Banks costume changes and way too many jokes about underpants from Len Goodman, Dancing With the Stars has reached the end of Season 30.

The ABC competition’s milestone cycle came to a close on Monday night, with victory in sight for Amanda Kloots, Cody Rigsby, Iman Shumpert and JoJo Siwa. Ahead of the finale, we asked for your thoughts on who would and should win Season 30, and Siwa and pro partner Jenna Johnson led both polls at the start of Monday’s broadcast. (The question of who should win divided our readers more, though, with Siwa only earning 32 percent of that vote; Shumpert, Kloots and Rigsby followed closely behind with 24, 23 and 21 percent, respectively.)

But before we could find out whether 47 percent of TVLine readers had accurately predicted Siwa as the winner, there was still plenty of dancing to be done. First, each duo performed a fusion dance, which combined two different styles into one routine; next up, it was the freestyles, easily the most fun and ambitious round of every season.

Here’s how the final two rounds of scored performances shook out — and no, you weren’t hallucinating a different Hough sibling behind the judges’ dais. With Derek Hough still in quarantine after contracting COVID-19 last week, sister Julianne — a former DWTS pro and former DWTS judge herself — filled in for him during the finale.

JOJO SIWA AND PRO JENNA JOHNSON
JoJo and Jenna first hit us with a tango/cha-cha fusion dance in Round 1, which had enough electricity to light up the Dancing ballroom for all of next season. But, oh, you needed another power surge? Then behold their freestyle, which included elements of various ballroom styles they’ve performed throughout the season, while also mixing in some high-energy and positively joyous sequences with the troupe. All told, JoJo and Jenna’s evening was about as flawless as possible, and the judges’ paddles sure reflected that. Judges’ Scores: 40/40 (fusion); 40/40 (freestyle) 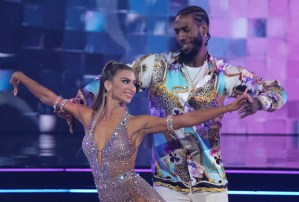 IMAN SHUMPERT AND PRO DANIELLA KARAGACH
In what was arguably the finale’s biggest head-scratcher of a fusion dance, Iman and Daniella had the unenviable task of combining a cha-cha and a… foxtrot? And Iman did pretty darn well with navigating those transitions. Since the routine was heavy on traditional ballroom steps, Iman’s so-so technique was glaring, but oscillating between those two wildly different styles was an impressively handled endeavor. And though of course their freestyle was jam-packed with wild lifts, Iman also had to master a dense dance full of very fast footwork, and he did so with a casual, fun flair that made the performance such a treat to watch. Judges’ Scores: 40/40 (fusion); 40/40 (freestyle)

AMANDA KLOOTS AND PRO ALAN BERSTEN
For their fusion dance, Amanda and Alan mixed a Viennese waltz with a paso doble, and Amanda seemed to finally allow herself to get a little sensual with her performance — though, to be fair, her previous dramatic performances were weighed down by insane Cruella and Saw costuming. (That prosthetic chin on Horror Night? Never forget.) Later, in their freestyle, Amanda looked absolutely exuberant, beaming with an ease and authenticity that I only wish she’d showcased a few more times throughout the season. And yeah, there was a brief out-of-sync section once the troupe joined in with Amanda and Alan, but pfft. Freestyles are essentially the Perfect Score category, baby! Judges’ Scores: 38/40 (fusion); 40/40 (freestyle)

CODY RIGSBY AND PRO CHERYL BURKE
A paso doble/cha-cha hybrid awaited Cody and Cheryl in the first round, which gave Cody an opportunity to show just how much his frame and footwork have improved in recent weeks. I remain a little stumped, though, as to why zero judges have ever commented on Cody’s face during performances, namely his tendency to puff out his cheeks and exhale like it’s a HIIT and hills Peloton ride. On the plus side, Cody was having so much fun lip-syncing to Todrick Hall’s “Nails, Hair, Hips, Heels” during his freestyle that the face was never an issue, and I never knew how much I wanted twerking in a finale performance. Judges’ Scores: 36/40 (fusion); 40/40 (freestyle)

Then, it was finally time for those results, and I won’t keep you in suspense any longer: The Season 30 winners are Iman and Daniella! JoJo and Jenna came in second place, while Cody and Cheryl and Amanda and Alan followed in third and fourth, respectively.

For the last time this season, I hand it over to you! Were you pleased or disappointed with the finale results? Cast your vote in the poll below, then elaborate in the comments!