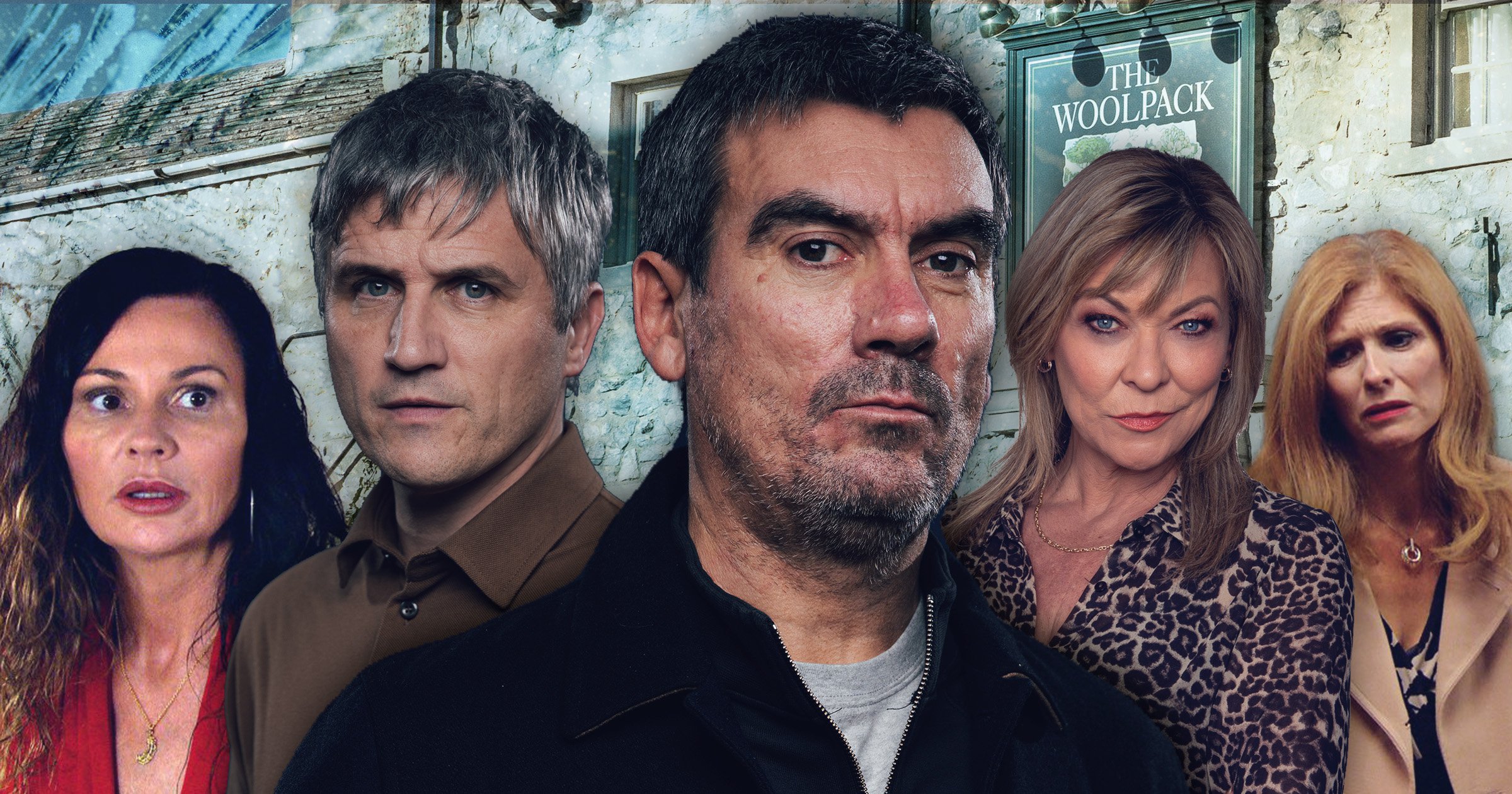 There’s a dramatic new arrival in Emmerdale this Christmas – and he’s not bringing glad tidings of love and joy to the village. In fact his presence adds even more worry to the already burdened shoulders of Cain Dingle (Jeff Hordley).

Meanwhile Chas (Lucy Pargeter) is feeling very alone as the family celebrates Christmas without her and she’s just about holding it together until she, too, gets a shock visitor.

Elsewhere, Liam (Jonny McPherson) gets a bit more than he bargained for, Bernice (Samantha Giles) takes on some new projects, Paddy (Dominic Brunt) struggles and Greg steps up his campaign against Marcus (Darcy Grey) and Ethan (Emile John).

Grab a mince pie and your festive beverage of choice and prepare for all to be revealed on Emmerdale’s eventful Christmas and New Year.

Cain gets a visitor on Christmas Day and it’s not Santa. Frankly Santa would have his hands full trying to decide if Cain was naughty or nice, but that’s beside the point. The visitor is none other than Caleb (William Ash) – the brother that Cain knew he had but tried to forget about.

It turns out that Cain and Caleb last saw each other in 1991 and a special flashback to that year reveals what happened between the two. We discover why we haven’t heard about Caleb until now – and why Cain shockingly told his brother that Faith (Sally Dexter) died 30 years ago.

Cain warns Caleb to stay away from his family, but will Caleb heed the warning? And with Cain behind bars, is there anything he can do about it anyway?

Chas gets massive news as Faith is launched

Following her split from Paddy, Chas is feeling sad and alone. She drops off some Christmas presents for the Dingles and a birthday present for Belle (Eden Taylor-Draper), but Belle and Mandy (Lisa Riley) make it very clear she’s not welcome. When Chas goes to find refuge in the Woolpack, she finds that Paddy and Eve are already there with Marlon (Mark Charnock)’s family, enjoying a cosy Christmas celebration.

It’s all too much for Chas and she quietly leaves, clutching the firework made from Faith’s ashes.

She visits her daughter’s grave and reads the Christmas card that Faith left her. She’s trying to hold herself together, but is stunned when a stranger approaches – and as Faith’s firework soars into the sky, Chas is given some shocking news.

Has Chip had his chips as Paddy struggles?

Will Chip be ok? And will Paddy find a way to cope? It’s not looking good for him as he sits in his car, failing to hold back the tears as he’s overwhelmed with sadness.

At more than one point this year it looked like Marlon Dingle might not be around to celebrate Christmas. His devastating stroke in the spring and then several trips to the hospital later left his health in a fragile state.

But with his own willpower and resilience, plus the help and support of wife Rhona (Zoe Henry) and the rest of his family and friends, he’s now back in much better health and has returned to being a chef – the job he loves. In emotional scenes at Christmas he thanks his loved ones for supporting him through his recovery and there will not be a dry eye in the house.

Liam (Jonny McPherson) finds himself invited to more than one Christmas dinner and, not wanting to offend anyone, he bravely sets about repeat helpings of turkey with all the trimmings.

His first visit is to the Dingles and he tries to refuse their kind offer of a meal but fails. When he gets to his next destination at Holdgate, Rishi (Bhasker Patel) and family have prepared a mountain of food. Liam bravely gets stuck in.

Tottering out of Holdgate with two dinners in him, Liam’s shocked when Bernice (Samantha Giles) tells him she’s saved him some food. Will he attempt his third dinner of the day?

And he’s even more shocked when he discovers that Bernice also has dessert in mind, when a charged moment ends in a kiss between them.

Bernice gets a business opportunity

When Eric Pollard (Chris Chittell) reveals that there might be a job going at the B&B because he and Brenda (Lesley Dunlop) are thinking of retiring, Bernice gets excited at the idea of starting a new venture.

Her plans impress Eric and he tells her the job is hers. There’s only one problem, though – Bernice wants to get started as soon as possible, but Mandy insists that she has to work a month’s notice at the salon.

Will Bernice find a way through the situation?

Greg carries on his vendetta against Marcus and Ethan, threatening to ruin Ethan’s reputation if they don’t drop their complaint against him. A campaign against Marcus’s business by Greg soon leads to a showdown between him and Ethan.

And Jacob (Joe-Warren Plant) lies to his friends that Liam is his dad rather than David (Matthew Wolfenden), leaving David heartbroken.