The central premise of the Pokémon franchise — which ranges from card games to video games, manga to music, and the popular Pokémon Go smart phone game — is relatively simple: Imagine a world in which there are hundreds of species of mostly cute “pocket monsters,” all of whom humans have trained to battle each other in scary, but not particularly brutal matches. But in the brand’s first live-action feature, that premise is the first thing to go: In “Pokémon: Detective Pikachu,” director Rob Letterman imagines a world in which people and Pokémon live together in harmony, a place without ‘mon-on-‘mon cage matches, a cute utopia that harbors plenty of nasty secrets.

It’s not the worst idea, and the CGI that enliven this wild world of people and Pokémon is nothing short of awe-inspiring. But no amount of technical polish can detract from a thin narrative that confuses far more than it amuses. Even worse: Every good joke has already been splashed across the film’s many (quite amusing) trailers. For a film that should surprise and delight at every turn, “Pokémon: Detective Pikachu” is clunkier and more confusing than a film about adorable creatures has any right to be.

Based on the 2016 video game “Detective Pikachu,” the movie is resistant to its source material,  a mission-bassed narrative that should make plotting easy. Instead, the script — which boasts five credited writers, including Letterman, Dan Hernandez, Benji Samit, Derek Connolly, and Nicole Perlman — opts for a messy, listless plotline that fails to capitalize on the best attributes of a detective story.

That “Detective Pikachu” won’t be so invested in the actual detecting is obvious early on, as the film opens with a cheery scene removed from everything else that follows. That’s where we meet Tim (Justice Smith), a former Pokémon devotee who has given up his childhood dream of being a trainer. His best friend Jack (Karan Soni, who somehow only appears once) is still eager for Tim to get his own Pokémon, going so far as to take him to a field to capture a wild “Cubone.” And if you don’t know what that is, well, you’re going to have a hard time with this movie.

It’s not surprising that so much of the humor in “Detective Pikachu” relies on previous knowledge of the monsters that populate it, but it does grate that those jokes are so one-note. What’s the gag about Cubone? He’s sad, dramatic, cries a lot, wears his mother’s skull as a hat. That’s it. That’s the joke. 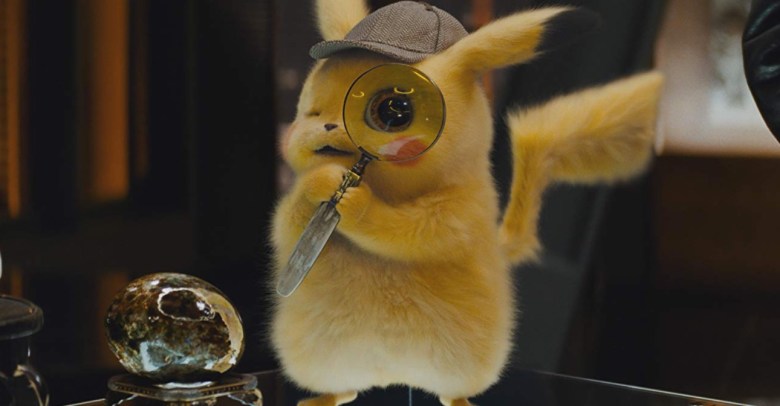 Tim may not be looking for his own Pokémon, but a Pokémon is looking for him. Dispatched to the wondrous Ryme City after his estranged father Harry (a detective!) goes missing, Tim is meant to grapple with both the emotional trauma of whatever it is that kept he and his father apart for so long and the goofy charm of a metropolis that has seemingly cracked the code of letting people and Pokémon live together happily. Inspired by the wacko dreams of billionaire philanthropist Howard Clifford (Bill Nighy, who excels as a wacko billionaire philanthropist as usual), Ryme City long ago did away with Pokémon battles, instead opting to let its ‘mons either live free (like feral cats) or pair up with a welcoming human to be best buds (obviously, a much more exciting option).

Ryme City isn’t just the ideal version of a Pokémon-filled world; it’s also the best possible version of “Detective Pikachu.” The streets are populated with scores of Pokémon trotting alongside their human pals, helping out with important industrial tasks, moodily singing in dimly-lit bars, serving up coffee to the masses, and even passing out in the street at will (another classic Pokémon joke — Snorlax like to sleep!). This fantasy vision is magical, but it comes in small doses, with Letterman pushing the material away from its finest ingredients and into a convoluted mystery.

Also in Ryme City: the befuddled (and adorable oh my gosh he’s so cute!) Detective Pikachu (a vibrant Ryan Reynolds) of the film’s title, who also happens to be Tim’s father’s Pokémon partner. But the detective can’t quite remember the details, which doesn’t bode well for the pair as they set about figuring out what happened to Harry. (One leg up for the duo: they can talk to each other, something no other human-Pokémon duo has been able to pull off.) For all the joy of Ryme City, there’s still a dark underbelly operating in the thriving metropolis, one that includes underground ‘mon battles, clandestine meetings down by the docks, and the very real possibility that this all has something to do with an evil plan to drug Pokémon and turn them into something else. It’s for the kids!

As Tim, Pikachu, plucky reporter pal Lucy (Kathryn Newton, charming enough to obscure thin writing), and her incredibly overwrought Psyduck embark on a sloppy mission to find Harry and take down some cartoonish baddies. In the process, the film doesn’t so much as go off the rails as grinds to a halt in the middle of what should be slam-dunk fun. By the time “Detective Pikachu” unspools some third-act twists that only further muddy the waters, it’s almost too late to appreciate that they are revealed during a literal Pokémon parade (hot tip for the inevitable sequel — set the entire thing at just such a parade). The eye candy is there, but not the basic sustenance of a coherent plot.

When “Pokémon: Detective Pikachu” spawns its inevitable sequel, the burgeoning franchise will have much in its favor: wonderful creature design, sweet stars, a coffee-addicted world-class detective who is also a Pikachu, and Bill Nighy yelling a lot. But those ingredients alone don’t guarantee a good idea. Forget the franchise’s “gotta catch ’em all” mantra. It seems that this particular game of Pokémon needed more time at the gym. Yes, that’s a Pokémon reference, and if you can’t follow it, don’t bother.

Warner Bros. will release “Pokémon: Detective Pikachu” in theaters on Friday, May 10.