Downton Abbey stars put on the glitz for the premiere 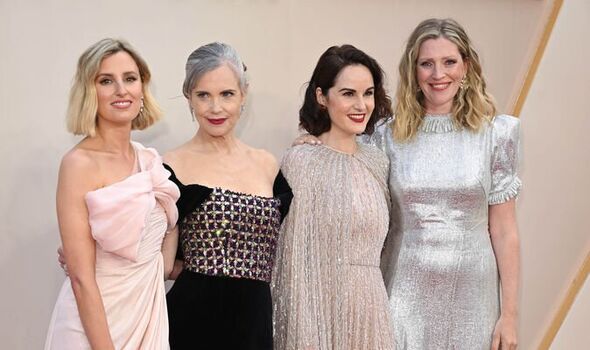 Laura, 35, who plays Lady Edith Crawley, turned heads in a pink one-shoulder gown with a bow and train at London’s Leicester Square. Michelle, 40, who portrays Lady Mary, wowed in a silver gown and cape while her on-screen mother Elizabeth, 60, sparkled in a black and silver dress.

They were joined on the red carpet for Downton Abbey: A New Era by fellow stars Hugh Bonneville, 58, Joanne Froggatt, 41, Jim Carter, 73, and his wife and co-star Imelda Staunton, 66.

Downton creator Julian Fellowes said: “We’re trying to mark the change – the fact that Crawleys of Downton are nearly in the 1930s, which is merely the beginning of the modern world.”

The film is in cinemas from Friday.

While the first film found farce in a royal visit, the inevitable follow-up takes the well-trodden path of the British TV spin-off – heading to foreign shores.

Here, the well-heeled family and their loyal lackeys descend on a French villa, bequeathed to Dame Maggie Smith’s Dowager Countess by a mysterious old lover.

“The British are coming,” says butler Carson (Jim Carter) as he accompanies Lord and Lady Grantham (Hugh Bonneville and Elizabeth McGovern) to the South of France for some gentle, fish-out-water comedy.

Meanwhile, Hollywood comes to Downton as Michelle Dockery’s Lady Mary Talbot agrees to let a studio use the country pile as a movie location to raise funds.

There are some sumptuous costumes on display in the film, as the silent movie era and the new world of international travel give the production designers fresh seams to mine.

But along with the floppy hats and designer sunglasses, there’s also plenty of old-fashioned pomp at the wedding of Lord Grantham’s widower son-in-law Tom (Allen Leech) and maid Lucy (Tuppence Middleton).

The couple struck up a romance in the first film just before Tom made the fortuitous discovery that Lucy was the secret illegitimate daughter of Baroness Bagshaw.

Cleverly, writer Julian Fellowes doesn’t diverge too far from his winning formula. There are soapy subplots, touching revelations and sharp lines for Smith’s matriarch – as well as her opposite number downstairs, Mrs Patmore (Lesley Nicol).

It may be a New Era for the characters, but this handsome slice of big-screen nostalgia will charm fans right from the opening tinkle of John Lunn’s theme tune.