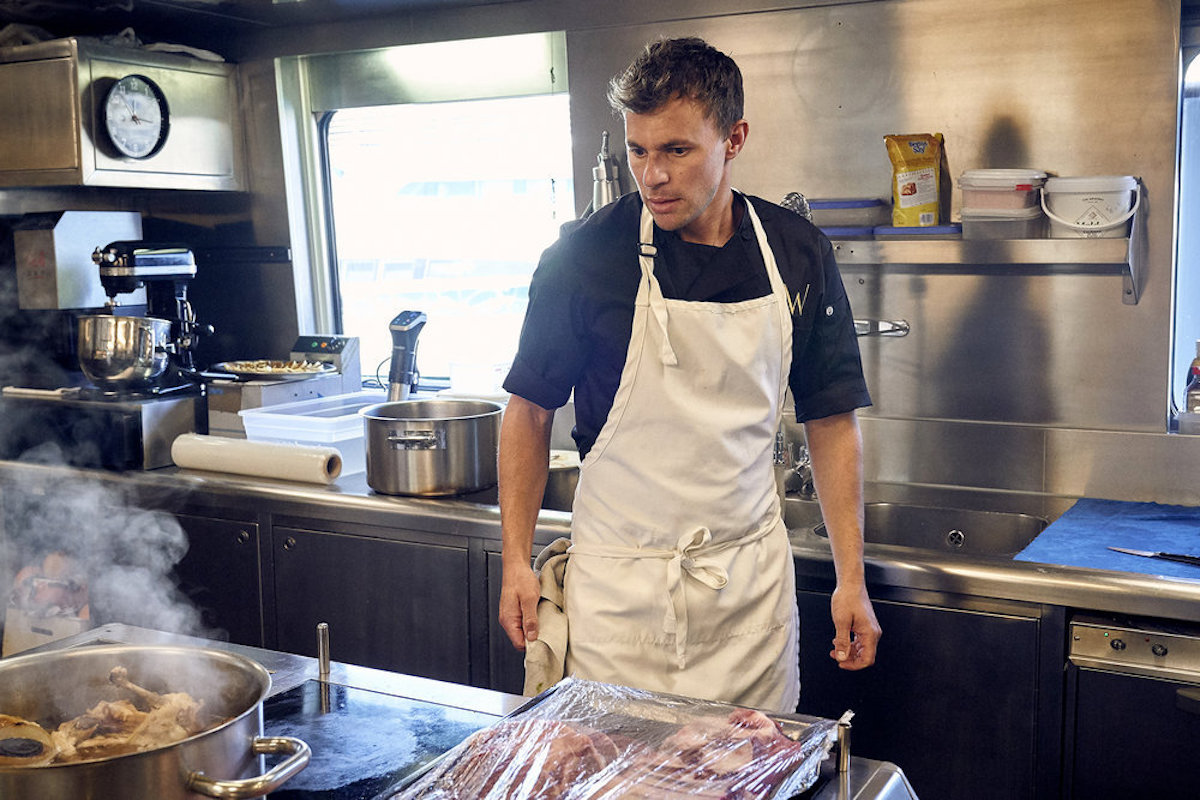 The supersized episode began when chief stew Hannah Ferrier was confronted about having prescription medication on board the yacht. Captain Sandy Yawn concluded that she could not safely take the boat to sea with Ferrier as chief stew. Ferrier was fired within the first 10 minutes of the episode.

The drama didn’t end with Ferrier’s historic departure. Chef Tom Checketts melts down during dinner service as the crew tries to navigate the charter down a crew member.

The season has hit all-time highs

Viewers eagerly awaited Below Deck Med, led by all women after the misogynistic meltdown on Below Deck season 7. Fans were outraged with how several men on the boat treated the women, specifically chief stew Kate Chastain.

The new season of Below Deck Med started with a bang touting the highest-rated premiere in the history of the series. From there, each episode bested the next. “S05E03 – 1.735 million viewers (0.58 18-49 demo) *series high in total viewers*,” Bravo Ratings shared early in the season. The following episode was another series high and then the series hummed along, averaging about 1.6 million per episode.

It’s never easy leading a team when all odds are against you. Kiko did his best, he did not fail, he won. He sees now that he must have the proper training to embark on a position as a chef on a Superyacht. I know as viewers it’s hard to watch, imagine doing this job! It’s not as easy as it appears from your living room. #Repost @bravodailydish ・・・ SPOILER ALERT! 🛥️⚠️@captainsandrayawn talks about firing Chef Kiko on last night's emotional #BelowDeckMed: "I gave him opportunity after opportunity." Link in bio for more from the captain on her decision to let him go, plus an exclusive interview with Kiko himself! #belowdeckmediterranean #belowdeckmed #belowdecksailing #mauijimsunglasses #superyachts #spain

Ratings began to explode when trouble was on the horizon for beloved chef Hindrigo “Kiko” Lorran. He left the boat as ratings surpassed the 1.7 million mark. When Ferrier’s medication was discovered, viewers knew Ferrier was in serious trouble. The latest episode was the end of the road for Ferrier.

Fans expressed their frustration on Twitter with several sharing they will no longer watch the series. “I have stopped watching a few weeks back. But reading this…yes….karma,” one person tweeted. Another person wrote, “Never watching #BelowDeckMed! Get malia off the show WE WANT HANNAH.”

Congrats on your little 1st stew in the oven. We'll miss you @hannahferrier234!

A number of fans shared they planned to boycott the show because of the way it handled Ferrier’s anxiety. Some viewers believe the storyline was damaging to mental health advocacy and vowed to stop watching. “Disappointment all around. I love the picturesque settings but that may not be enough to keep my interests in a show that was set apart from the usual reality diet and formula,” one viewer tweeted.