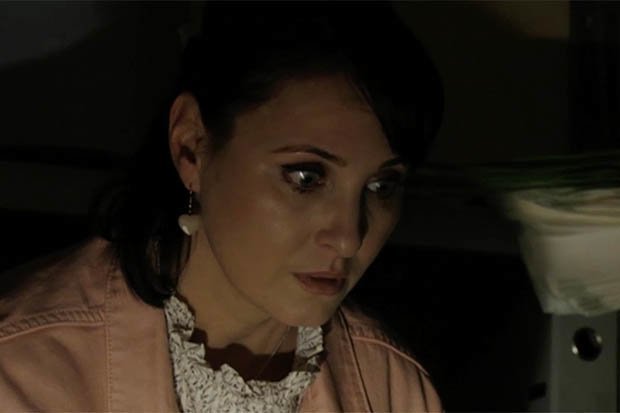 EastEnders fans were left on the edge of their seats during tonight’s episode of the BBC One soap.

“Heartbroken” viewers felt “tense” during the entire half an hour-long show as on many occasions Honey Mitchell (Emma Barton) came close to discovering her partner Adam Bateman (Stephen Rahman-Hughes) is having an affair.

The cheat has been romping with Habiba (Rukku Nahar) for weeks but cheery Honey refused to believe it after her ex Billy tried to warn her.

The dramas unfolded tonight as Honey realised she had lost her keys to the shop, sending her on a frantic mission to find them.

Realising she can check the CCTV to see where she left them, she rushes to Adam’s to grab him so he can help her – meeting Billy along the way.

But on the other side of the door Adam had Habiba pinned against it as they made out, shortly after romping.

Realising what she’s about to walk in on, Billy intervenes and manages to stop her from walking in at the very last moment.

Before returning to the shop, Honey confesses to Billy she is planning to ask Adam to marry her but a tearful Billy doesn’t dare mention the affair again.

Fans were then left feeling anxious for Honey once again as the babe pulled up a laptop to check out the shop’s CCTV for her missing keys, only to discover the heartwrenching truth about Adam.

She stood staring as footage of her man kissing Habiba appeared on the screen, against the counter where she works.

Fans instantly rushed to Twitter to speculate on what they think will happen next as the soap’s theme tune began playing.

One wrote: “I put my money on Honey and Billy getting back together now.”

A second said: “Oh poor Honey. Go get Billy back!”

Another tweeted: “Adam’s such a cheating prick. Reckon she’ll go back to Billy.”