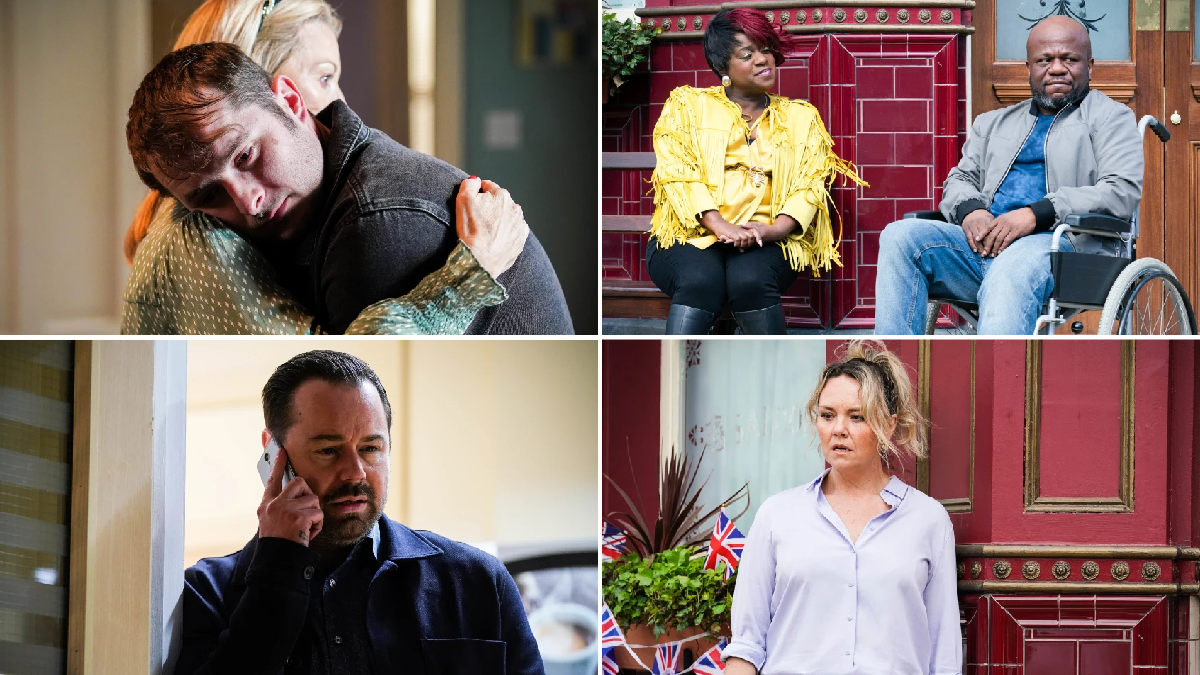 There are emotional scenes ahead as a traumatised Ben Mitchell (Max Bowden) continues to break down in the wake of being raped by Lewis Butler (Aidan Callaghan) in EastEnders.

As Kathy Beale (Gillian Taylforth) confronts Ben about his destructive behaviour, he opens up to his mum about what he has been through – and a shellshocked Kathy wants him to go to the police.

Elsewhere, disaster is set to strike for arch enemies Linda Carter (Kellie Bright) and Janine Butcher (Charlie Brooks) when they are caught in a car crash.

And Mick (Danny Dyer) will soon get shattering news…

Janine makes plans with Scarlett to visit her sister, Clare, but her focus turns elsewhere as she remains insecure following Mick and Linda getting on so well last week. As Nancy prepares to go to Watford with Linda, Sharon reminds Linda that telling Nancy about the money is for the best.

Nancy is apprehensive about the trip and her feelings worsen when Zack lets slip that Linda was planning to leave a few weeks ago. As Linda and Nancy set off, Sharon enjoys winding up Janine, revealing Linda plans to tell Nancy the truth.

On their way, Nancy confronts Linda about almost leaving and before Linda has a chance to explain everything, Nancy storms off and goes back to the Square. With her car broken down, a deflated Linda turns to alcohol.

Janine is on tenterhooks when Nancy storms into The Vic, clearly upset about something. Janine intercepts a call from a drunk Linda and willing to do anything to stop Linda from speaking to Mick, gets a cab to Linda despite missing plans with Scarlett.

With the car now working, Janine drives a drunk Linda and Annie home and pleads with her not to tell Mick the truth, opening up about her feelings. Tragedy strikes however when Janine loses control of the car and crashes.

Kheerat is concerned when Ben refuses to work at The Arches and with only Dotty to help, Jay offers to speak to a mechanic he knows.

Ben spots Lewis telling Kathy he was recently involved in a homophobic attack but Ben has little sympathy and tells Lewis he gave him an STI. After Ben is rude to Lola, Kheerat is worried to see the medication Ben is taking and later pays him a visit, letting him know he is there to talk to.

Alone, Ben calls Lola to apologise for earlier but she fails to answer.

At the Panesar’s, Suki is riled by Ash’s tone when talking about Dotty settling into their family and as she leaves, Suki can’t help but go through Ash’s bag.

Meanwhile, Ash asks Vinny for some money but as Vinny hands her the cash, Suki confronts her about a secret. Suki and Ash come to blows and Vinny snatches back the money.

Saved in the Mick of time?

Sharon looks after The Vic while Mick tends to an upset Nancy and when she realises they still don’t know about Janine, wonders if she should tell them. The mood abruptly turns however when Shirley gets a call from the hospital to say there’s been an accident. Nancy, Mick and Shirley rush to the hospital and get some devastating news – Linda is in critical condition and could die.

Janine wakes up to Annie’s cries and soon realises the severity of Linda’s injuries. Janine shows her true colours.

Lola, Frankie and Jay gossip in The Vic and after Jay leaves, Frankie is on a mission to get a better photo of Lola for her dating app profile.

Kathy snaps at Ben after he is rude to Rocky.

At The Arches, Ben shows up for work and is put out to see Kheerat has hired another mechanic, Dave. Ben is uncomfortable with Dave’s over familiarity so heads off for some fresh air.

Callum tells Lewis he should report his homophobic attack to the police, unaware Ben is watching on. Spooked by their exchange, Ben returns to The Arches and insists Dave leaves. Alone, Ben breaks down.

Peter returns to Walford East and seeing his struggles, Dana suggests she has her job back despite her tensions with Bobby.

Ben wakes up after spending the night in The Arches and panics when he hears Dave slamming on the door for his wages. Unaware Ben is hiding inside, Jay sees the commotion and gives Dave what he is owed much to Ben’s relief.

Kheerat arrives and is alarmed to see the state of Ben, suggesting he needs to take some time off. With Ben on her mind, Kathy tries to fire Lewis but he warns her he could take legal action, so instead she gives him a warning.

Desperate to help Ben, Kheerat shares his concerns with Kathy. When Ben arrives home, Kathy confronts him and tensions between the two continue to grow.

As Kathy puts the blame on Ben for what happened with Callum, things become too much for Ben and the penny drops for Kathy – Lewis raped Ben.

Lewis asks a reluctant Callum to help him go over how to report his attack to the police taking advantage of Callum’s good nature.

Peter returns to Walford East and seeing his struggles, Dana suggests she has her job back despite her tensions with Bobby.

How(ie) did you hurt yourself?

Kim is surprised to see Howie talking to Martin but things end badly when Howie trips over Kim’s bag.

With an injured leg, Kim wheels him off to A&E and although he doesn’t want her help, she insists that he moves in with her while he recovers.

Kathy reels from her discovery and does all she can to support Ben but needing some space, he rushes out.

Ben later returns much to Kathy’s relief and they continue to talk about what happened. Kathy has a heart-to-heart with Ben and encourages him to go to the police but Ben refuses.

Elsewhere, Lewis talks to Callum about his attack.