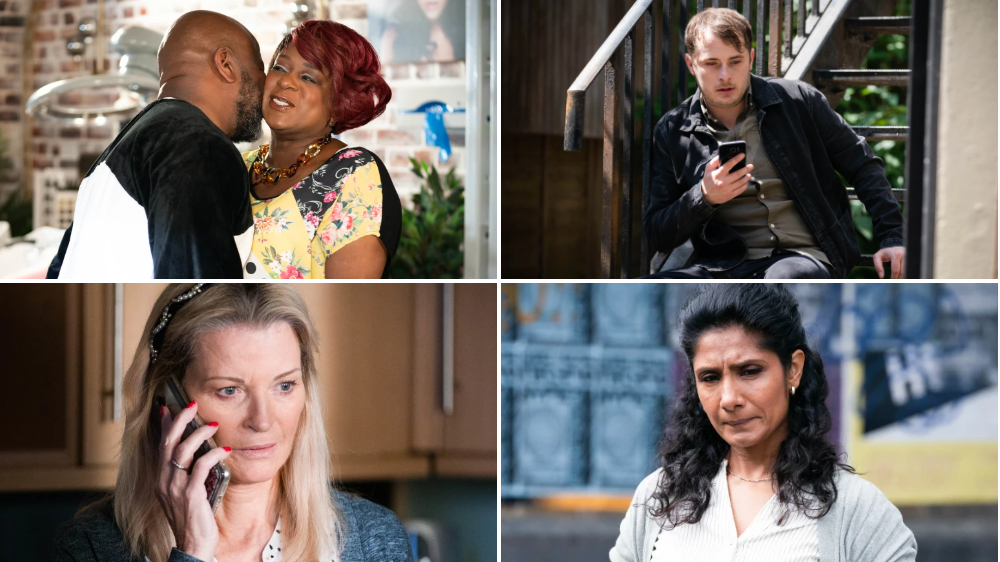 Ben Mitchell’s (Max Bowden) crisis reaches its worst point yet in next week’s EastEnders, as a drugs binge leads to him collapsing.

When he is then found without a pulse, Kathy Beale (Gillian Taylforth) fears the worst – is her son dead?

Elsewhere, Suki Panesar (Balvinder Sopal) struggles to win back her children; with Kheerat (Jaz Deol) rejecting her once more.

And then a new arrival mixes things up even further…

Kathy is unimpressed to see James has stayed the night with Ben and as they discuss plans for later, Kathy reminds Ben it’s Lexi’s dance exam and a family meal after. At the Minute Mart, Suki attempts to reconcile with Kheerat but things get heated when they spot Ben listening.

Ben tries to offer some advice to Kheerat but he makes his feelings clear. After turning up late for Lexi’s exam, Ben is forced to explain why he was delayed and realises how hurt she is. Lexi reveals she misses her old dad causing Ben to snap at her and make her cry.

Gutted, Ben turns to Tez for drugs, but a concerned Sam spots the exchange and tells Ben to pull himself together. Ben heads to a party to find James but as he takes more and more drugs, James sends him home. Realising  he’s late for Lexi’s dinner, Ben leaves her an emotional voicemail and says he’s on his way, but he collapses.

Things get worse for Suki when Kheerat announces he’s renting no.41 and he, Vinny and Ash are all moving out. Dotty finds herself caught in the middle but as Suki stoops to a new low to try and convince her children to stay, Dotty awkwardly helps pack up.

Tensions simmer and Kheerat has another blow for Suki – he’s buying her out of the businesses.

Howie takes a phone call and later visits Kim, suggesting a date night so they can talk. Kim assumes it’s so he can propose and when she bumps into Felix, she tells him she’s going to let Howie down gently, it’s too soon. However Kim gets a call – Howie’s cancelled tonight. Howie meets with a woman, Delilah, who implores him to tell Kim his secret. Callum tells Jay about his hunt for a new flatmate and convinces him to move in.

Lexi is upset when Ben is a no show for her meal and as her family try to comfort her, Callum and Jay arrive. Lexi plays the voicemail from Ben and they realise something is wrong. Kathy, Callum and Jay rush to find him and their worst fears come true when they find him with no pulse. The paramedics rush him to hospital but can they save him?

Zack tells Sharon that Ben collapsed and Sharon realises he’s keeping something from her. As Phil returns, Sharon tells him the truth – Sam knew about the drugs and has been letting it happen.

Kheerat is irked as Stacey encourages him to sort things with Suki but he stops the conversation, not wanting Arthur to overhear. Stacey gets the wrong end of the stick and when she sees Arthur upset, implies to Eve she needs to end things with Kheerat. However Stacey is touched when Kheerat apologises to Arthur and realises he only ended the conversation as he was listening.

Meanwhile, Suki invites Eve for a drink. Vinny is annoyed as Dotty questions whether moving out was the right thing.

Kim tells Denise she’s going to propose to Howie but as she prepares, Howie arrives.

Sam is on edge as Phil ignores her calls and she instructs a guilty Zack not to tell anyone about the drugs. Sam warns Jonah the dealing has to stop.

Phil returns home but Sam finds herself in hot water when Phil reveals he knows about the drugs.

The Taylors prepare for Avery’s ‘Nine Night’ and send Felix and Finlay off to do the shopping.

Felix spots Kim and gives her a lipstick they were discussing before, however Felix panics when he realises the money for the shopping was in the bag with the lipstick and Kim has thrown the bag away.

The brothers desperately search the bins for the bag but it’s too late. Back at the Taylor’s, Mitch makes a toast to Avery and Felix and Finlay are forced to come clean to Karen, they lost her money.

Elsewhere, Suki receives a letter and doesn’t like what it says. Things get worse when she sees Nina and realises Kheerat is pushing her even further out of the family. Desperate, she turns to Vinny for help.

Sam is furious to learn it’s Zack’s fault Phil knows about the drugs and tries to fire him but Kat gets there first. Feeling guilty, Zack offers to make it up to Sam but is left shaken. when she instructs him to bring Lewis to her, she needs to win back Phil’s trust. Zack refuses but she points out if Phil discovers Zack knew about the drugs, he’s in deep trouble.

Ravi makes an entrance to the Square and immediately riles Stacey as he flirts with her. As Phil chats with Sharon, he spots Ravi and has an idea.

Suki prepares for a business pitch for Ranveer but tensions flare as he questions why Kheerat is pitching against her. Suki covers and says Kheerat is trying to be independent, but when Ranveer’s son, Ravi, arrives, Ravi pushes Kheerat’s buttons, questioning his loyalty to his mum.

The Taylors recover from the night before but their focus turns to Mia when she’s upset the family can’t afford to take her to a theme park for her birthday. Feeling guilty for losing the money, Finlay comes up with an idea.