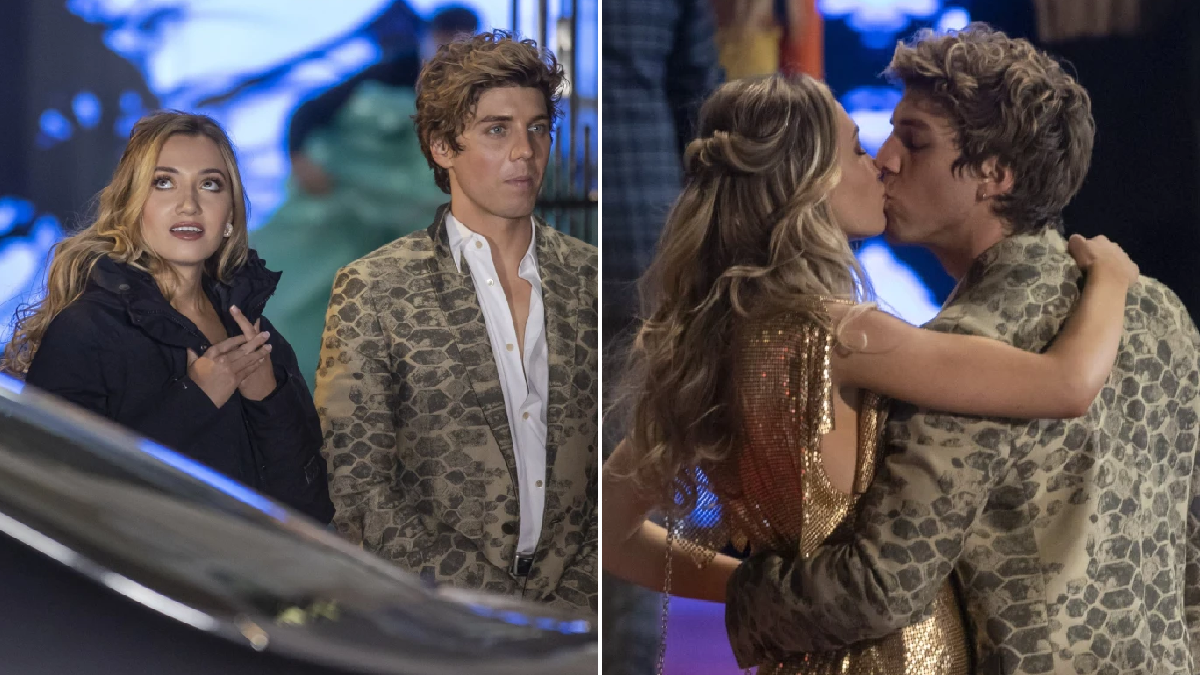 EastEnders star Tilly Keeper has been spotted filming scenes for the new season of smash hit series You.

The actress, who played Louise Mitchell in the BBC One soap, has joined the cast of the psychological Netflix thriller for it’s upcoming fourth series, which will be filmed in the UK.

Tilly is playing the role of Mimi, and new pictures from filming see her beside actor Lukas Gage.

The characters, who are thought to be in a relationship, are on a red carpet, with fans are calling their names as they enter an art gallery.

The duo, however, are blissfully unaware of the fact that killer Joe Goldberg, the show’s protagonist, is watching them from afar.

Gossip Girl star Penn Badgely, who plays Joe, was spotted filming the scenes in question, sitting on a bench nearby.

But just what does Joe have planned? Well, it is thought that Gage’s character will wind up either injured or dead, and police were seen arriving at the event soon afterwards.

It was first revealed earlier this month that Tilly, 24, had landed a role in the popular show, as production moved to the UK for its fourth series.

‘This will come as a huge surprise to the millions of fans of the show around the world, who got used to the first three seasons being based in various locations in the US’, a TV insider told The Sun.

‘The last thing they would have expected was for the next outing to move lock, stock and barrel across the Atlantic and feature a largely British cast.

‘But the producers wanted to provide a fresh take on the show, though Joe will no doubt be going back to his dark deeds when he arrives in London.’

Dario Coates, who played the first iteration of Michelle Connor’s biological son Alex Neeson in Coronation Street, will also join the show, as will Eve Austin, who portrayed Tabitha Taylor-Rudd in Emmerdale.

Sean Pertwee, who is best known for his work on Gotham, where he played Bruce Wayne’s trusted butler and father figure Alfred Pennyworth, was also spotted filming scenes for You alongside Tilly.

Tilly is best known to audiences as the fourth actress to play Louise Mitchell in EastEnders, a role she held between 2016 and 2020.

Louise featured in a number of high-profile storylines during that time, including a relationship with Keanu Taylor, who was also sleeping with her stepmum Sharon!

Louise got involved in a plot to have Keanu killed when she found out about the affair, but she ultimately came to regret her decision. Little did she know, however, that Keanu was still very much alive, as Martin Fowler and Linda Carter had faked his death.

It was confirmed in December 2020 that Tilly had chosen to leave EastEnders.

‘I have loved playing Louise Mitchell over these past few years, and I feel honoured to have been part of such an iconic show,’ she said at the time.

‘Working with our incredible cast and crew has been a joy and I shall miss my EastEnders family greatly.’

Since departing Walford, the 24-year-old has featured in BBC’s Make me Famous and film Marooned Awakening, which will have its premiere later this year.

EastEnders airs Mondays to Fridays at 7:30pm on BBC One.

You Series 1 to 3 are available to stream on Netflix.