Educating Yorkshire stars Musharaf Asghar and Matthew Burton have been reunited years after the then-student famously overcame his stammer on the show.

It’s been 10 years since Musharaf – aka Mushy – appeared on the documentary series where he found his voice amid a severe stammer thanks to the help of his teacher Mr Burton.

While preparing for a speech as part of his English GCSE exam, Mr Burton suggested Mushy should try rehearsing his lines while listening to music, a method used in acclaimed film The King’s Speech.

The trick enabled Mushy, who had difficulty communicating with his teachers and fellow students, to speak fluently without stammering.

Mushy has come a long way from the shy teenager who captured audience’s hearts, and is now a journalist and a keynote speaker, something which would have been unimaginable when he was suffering from the worst of his stammer.

The broadcast journalism graduate is also considering branching out into teaching, thanks in part to the difference the teachers in his life made to him as a child.

And, appearing on Wednesday’s Good Morning Britain, Mushy was reunited with his old teacher, who surprised him on the show. 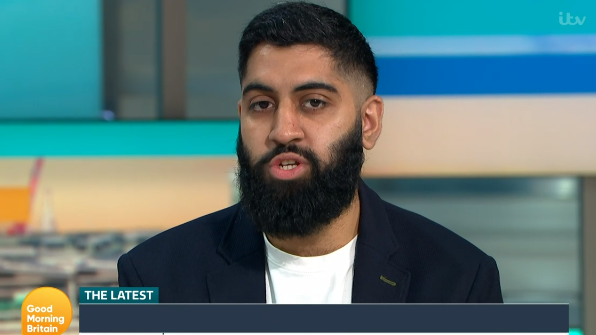 The pair clearly retained their old banter, with Mushy joking it was ‘nice to see’ his old teacher had ‘a full set of hair.’

Mr Burton used his surprise appearance on the show to pay tribute to Mushy and speak about how ‘incredibly proud’ he was.

He explained: ‘When you get into teaching you want to make a positive difference every day. I’m sitting here listening to him talking and I’m incredibly proud of the young man he is.’

He went on to say that they were ‘fortunate’ Mushy’s incredible achievement was caught on camera for the documentary, but things like this ‘happen in classrooms every single day.’

‘I’m sitting here listening to him and I’m blown away by the young man he is,# Mr Burton went on, paying tribute to his ‘perseverance, determination and grot.’

‘It’s everything we as teachers try and instil in young people to have a positive impact in the world.’

Mushy, meanwhile, had said he would ‘not be here without the support I got in school.’

He added that the help from Mr Burton was not just the support in overcoming his stammer but also learning to ’embrace who I truly was.’

The keynote speaker recalled how his teacher told him: ‘We don’t need to find this magical cure, it’s about accepting who you truly are.’

Mushy recently marked a decade since he appeared on the show with a post on social media, where he posted an old photo of him in his uniform and wrote: ‘For weeks I’ve contemplated my existence, trying to understand where I fit in the world.

‘Today I woke up aged 26 realising how important my life is. 10 YEARS AGO I featured on Educating Yorkshire and life has been crazy.

‘Thank you for the support throughout the years. God bless.’