Home » TV & Movies » Eli Manning on How to Beat Tom Brady, and Why He Hasn't Jumped Into the Booth – Yet 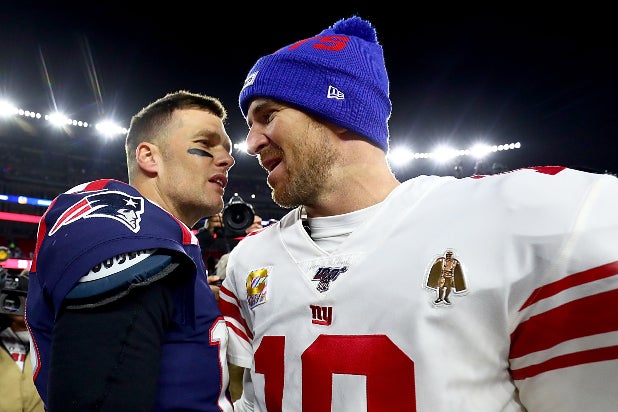 This diehard Giants fan asked Manning how a quarterback can prepare to beat the legendary Brady, whom during Eli’s playing days quarterbacked the New England Patriots and now plays the position for the Tampa Bay Buccaneers. And what can one offensive leader really do about the other one when they never actually meet on the field, save for a pregame handshake and postgame hug? Listen up, Patrick Mahomes.

“I think about the 2007 season…Tom was a tremendous player that year. He was the MVP. But his legendary status wasn’t what it is today, in that sense. So it’s a little different. You obviously know you’re going up against a great offense, they have Randy Moss and (Wes) Welker and kind of playmakers all over the field,” Manning told TheWrap. “We’d played them earlier that year, the last game of the season. They put up 38 (points) against us, or whatever it was, so we knew they could score and had that ability. Really, you just can’t go into the game saying, ‘We gotta put up 40 points today.’”

Instead, it was: “We gotta play smart football, we gotta take advantage of our opportunities and you just gotta play to the circumstances of the game.”

That 2007 NFL season was the one where New England was undefeated until Manning and the Giants shocked the world in Super Bowl XLII. Manning also led New York to defeat the Patriots in 2012’s Super Bowl XLVI. Both were tight games until the end. Both times, Eli Manning was named the big game’s MVP (Most Valuable Player), and Brady took an “L.”

(Don’t feel sorry for Tom Brady, he’s got six rings and is eyeing No. 7 on Sunday — appropriately the seventh day, though unlike God, Brady never rests.)

“I think that’s what you see about Tom Brady in kind of most of his games and Super Bowls and playoffs is that whenever he has an opportunity to go win a game or make a play in the fourth quarter to get the lead, he typically makes those plays,” Manning continued. “I mean I think you kind of see it with [Brady] and (Kansas City Chiefs QB Patrick) Mahomes, so that’s why I think this game could be high-scoring the whole game. But especially the fourth quarter, I think both quarterbacks and both teams will get it going and score a lot of points in that fourth quarter because they know what’s on the line.”

Eli Manning was not just an excellent (and two-time Super Bowl-winning) quarterback like his older brother Peyton Manning, he is also a very well-liked personality. In addition to their many TV commercials, both Mannings have hosted NBC’s “Saturday Night Live.”

So why is neither sought-after brother in the broadcast booth, or at least doing a football studio show?

“I think it’s just, for me — I can’t speak for Peyton — I just didn‘t want to rush into something too soon before I was committed to it and ready to kind of have another full–time job or gig or that responsibility,” Eli said. “I kind of wanted to be able to pick my schedule a little bit, especially this first year and having young kids and just didn‘t want to all of a sudden– when it comes to calling games, your travel is worse than when you were playing. Every game is an away game and you gotta be there for Friday practice and you’re gone Thursday, Friday, Saturday, Sunday. And I just wasn’t ready to commit to that schedule and commit to something after 16 years of the grinding job of playing quarterback. I kind of just wanted to see what my options are and test out a few things before I jump into my next adventure.”

One of Eli’s next adventures is again following in Peyton’s footsteps. When Disney announced the ESPN+ Season 3 renewal of series “Peyton’s Places,” the company also revealed that Eli Manning would be doing a collegiate football version of the travel-and-stories show.

What was it about that format that resonates with the Brothers Manning, you ask? We asked too.

“I think it keeps you in the game of football. It is what we know, it’s what we enjoy to talk about, it’s what we enjoy to analyze. But you take a different perspective into it and bring a little humor into it,” Eli said. “So I think being able to stay involved, for me more in the college ranks and pick your own schedule to set these things up and have a little fun with it, that’s exciting. And to bring some knowledge, bring some fun, bring some entertainment and discuss the great history of college football.”

In addition to the Manning shows, ESPN+ has enlisted Abby Wambach (soccer), Ronda Rousey (combat sports) and David Ortiz (baseball) to do similar versions of the format in their respective sports.

Manning may not be playing anymore, but he’s had a super-busy Super Bowl week.

In a stunt for charity Tackle Kids Cancer, and we suppose to plug Frank’s RedHot, Manning poured 100 gallons of the hot sauce onto TikTok star David Dobrik.

“It is a lot of Frank’s (laughs),” Manning told TheWrap ahead of the stunt. “It’s an idea that came out of left field and we’re running with it and it should be fun to watch.”

“Super Bowl LV,” in which the defending-champion Kansas City Chiefs will visit Brady’s Buccaneers in Tampa, kicks off Sunday on CBS at 6:30 p.m. ET/3:30 p.m. PT.