The stars of Emmerdale have teased that Charles (Kevin Mathurin) may be in peril, as they revealed that a gruesome injury he sustained could lead to dire consequences.

During Emmerdale’s second survival outing, former lovers Charles and Manpreet (Rebecca Sarker) found themselves holding on for dear life when they fell into the rapids.

Fortunately, the pair were able to hoist themselves out of the water… but more drama lies ahead.

On Wednesday’s edition of Loose Women, Rebecca and Kevin joined the panel via video chat to tease what the soap has in store for Manpreet and Charles, as their chemistry continues to sizzle.

Rebecca noted that viewers will be aware that the characters ‘have dragged themselves out of the rapids’, their intriguing story will continue to unfold.

‘There’s a lot of chemistry between Manpreet and Charles, so as far as I’m concerned, as far as Kevin and I are concerned, I think our little story continues with great passion and it’s very poignant,’ the actor said. 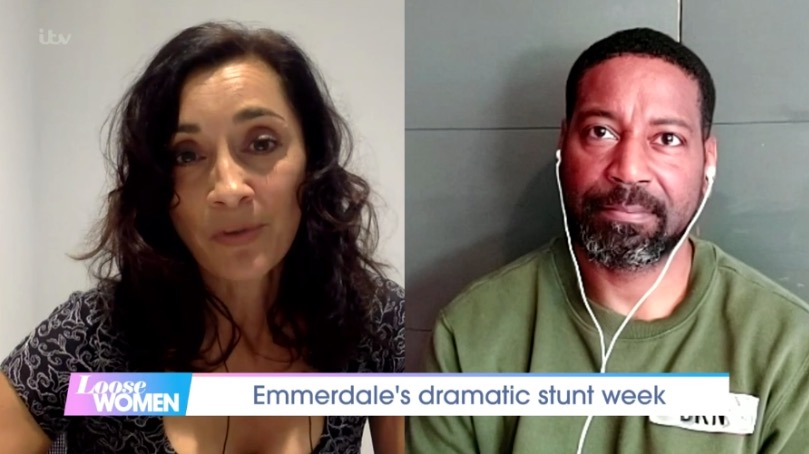 She added that the nasty injury that Charles has on his leg may turn out to be more grave than viewers may have initially realised.

‘There’s more jeopardy in terms of, I mean, one little snippet I can give you I suppose is that we’ve just seen that Charles has noticed quite a gash in his leg, and that proves to be, well, not a minor injury, let’s just say that,’ she said.

Will Charles make it out alive, or could his life be in danger?

Rebecca and Kevin also revealed a clip from tonight’s episode, when Manpreet and Charles have made it out of the water and are opening up to each other about their feelings.

‘Of course I love you. I never stopped,’ Charles says to Manpreet.

Manpreet questions what they’re going to do now, as she acknowledges that Charles ‘can’t hurt Andrea’ (Anna Nightingale), who he previously confessed his love for.

‘You wrecked everything when you walked away,’ Charles adds to Manpreet. Could there be hope for the rekindling of their romance yet?