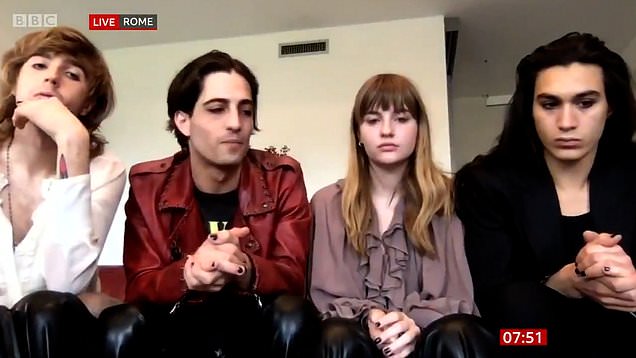 Damiano David from Italy’s Eurovision Song Contest 2021 winning group Maneskin has said he is ‘really offended’ over claims he was using drugs during the show.

Maneskin won this year’s competition with their entry, Zitti e buoni, scoring an impressive 524 points, far ahead of the UK’s entry with James Newman suffering a devastating defeat with nil points.

As the final unfolded on Saturday, footage began circulating online showing singer Damiano bending towards the table leading many to speculate that he was using cocaine.

He has vehemently denied these allegations and has vowed to take a drug test to prove his innocence.

The whole group joined Dan Walker and Louise Minchen on today’s BBC Breakfast where they explained what really happened on Saturday night.

Damiano said that he was inspecting a broken glass on the table and leant down towards it. 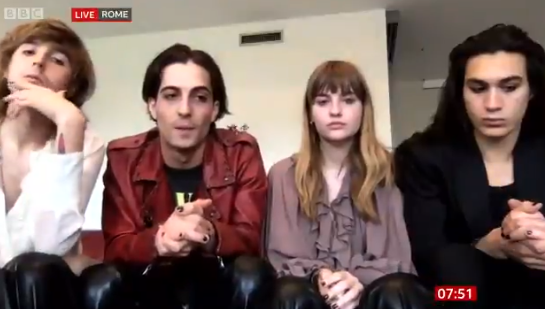 ‘When I was cheering, I saw the glass broken and I was like, “My God what happened?”,’ he recalled.

He added: ‘I feel really offended, I think that these kind of things are outrageous. We’re young guys with huge passion for the music and this is actually overshadowing our win.

‘We will get drug tested to prove it’s all speculation.’

‘We’re trying to spread our music and a positive message and we’ve never had use of drugs,’ she told the programme. ‘We really don’t want to spread this kind of message.’

In a statement, they said: ‘We are aware of the speculation surrounding the video clip of the Italian winners of the Eurovision Song Contest in the Green Room last night. 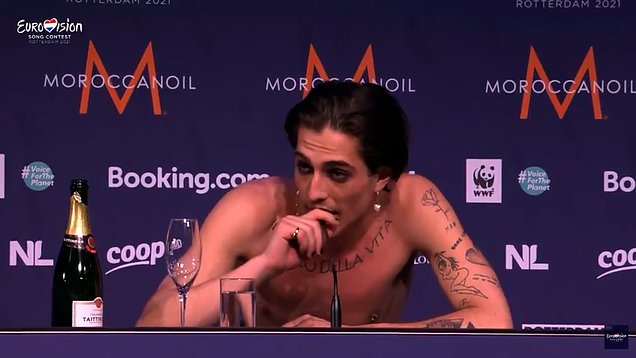 ‘The band have strongly refuted the allegations of drug use and the singer in question will take a voluntary drug test after arriving home. This was requested by them last night but could not be immediately organised by the EBU.’

Backing up Damiano’s explanation that the reason he bent down was because he found glass, they continued: ‘The band, their management and head of delegation have informed us that no drugs were present in the Green Room and explained that a glass was broken at their table and it was being cleared by the singer.

‘The EBU can confirm broken glass was found after an on site check. We are still looking at footage carefully and will update with further information in due course.’