[Editor’s Note: The following contains spoilers for “Game of Thrones” Season 8, Episode 4, “The Last of the Starks.”]

“Game of Thrones” introduces viewers to a new and improved scorpion — a giant crossbow-like weapon — in “The Last of the Starks” that is a vast improvement from the previous clunky one that Bronn (Jerome Flynn) used in the Loot Train battle last season. That old mounted crossbow is big enough to launch a bolt that could pierce a dragon with one man operating it by standing behind it. The new scorpion is massive and requires seven men to operate it, and it has a greater range.

Not only does this scorpion kill a dragon (RIP Rhaegal), but its bolts also have the power to rip through the hull of ships from a distance. Series weapons master Tommy Dunne — the equivalent of Maester Qyburn — spoke to IndieWire about making the massive and impressive piece of machinery.

“In Season 8, the boys [showrunners David Benioff and D.B. Weiss] came back and said they want it 50-70 percent bigger. So that world of pain started,” Dunne said with a laugh. “We finished it the day of — or the morning of — when we were shooting the scene. In the workshop, I got to test it with a cardboard tube bolt. And fired it in the workshop, which is about 100 feet long. It flew very well. It nearly took out my bench.”

The limbs are what create the significant increase in power this year. The old scorpion only had two limbs, whereas Scorpion 2.0 has four limbs criss-crossed in an X and two additional horizontal limbs.

“It’s basically an homage to Leonardo da Vinci because it was Leonardo da Vinci who created a massive crossbow with overlapping limbs,” said Dunne. “Da Vinci’s never got made and [in] modern time it was proved that it wouldn’t work because of the lamination of the limbs,” he added. “But you see the shape, the outer shape of the scorpion itself is exact same look as the Leonardo da Vinci drawings that he has and I wanted to do a little bit of a homage to that.” 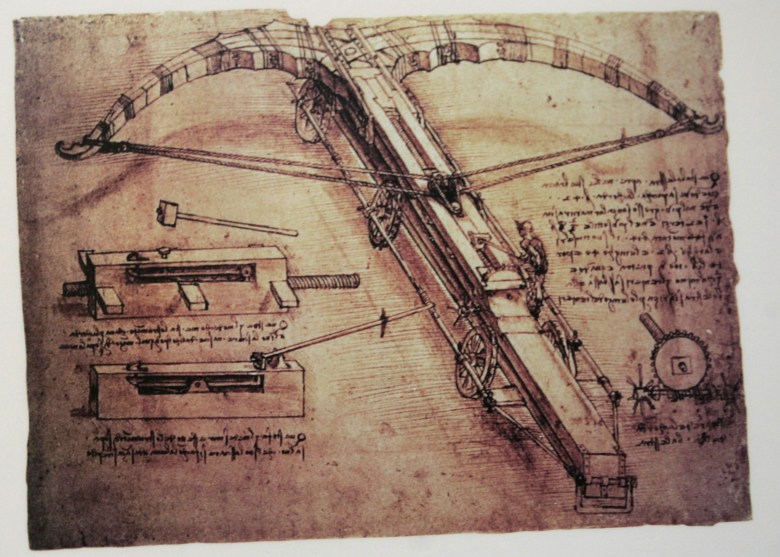 This scorpion, however, is fully functional as seen on screen. Besides the firing mechanism, the weapon does require four men to operate its movement, two people to load the bolt, and finally the “pilot,” aka Euron Greyjoy (Pilou Asbaek) to launch the bolt.

“We have four men on the brace or a crossbar — the four are doing all the moving left and right, up and down. Then we have two guys loading the bolts into it. We stuck one of my boys in the workshop, [armorer model maker] Keith Donnelly, in there and put a wig on him for the part of the leader.”

The design is also significantly different in that it has a reclined seat for the pilot. “We wanted to put a seat [similar to one] for an old Quad .50 cal [machine gun] from World War II,” said Dunne. “We designed it so that it’d be very, very comfortable but also very relaxing like a one leg up, relaxed back. It’s not something that needs to look rigid or regimented. It’s all about him being cool and laid back. Pilou the actor, he’s a bit of a cool dude.”

The scorpion is about 26 feet long and 22 feet wide, with bolts that are approximately 13-15 feet long. The time and effort to make one practical model is considerable, and therefore the rest of the scorpions seen on screen are CGI replicas of the real thing. But this also means that the hero scorpion had to go through a slight cosmetic change since there are two types seen in Episode 4: Euron’s version mounted on the Ironfleet decks and then the Lannister versions seen mounted on the King’s Landing battlements.

“We hadn’t the time nor the manpower to make two weapons. It was a lot of engineering and a lot of mind-boggling thinking of how you could turn it into two weapons within one weapon,” said Dunne. 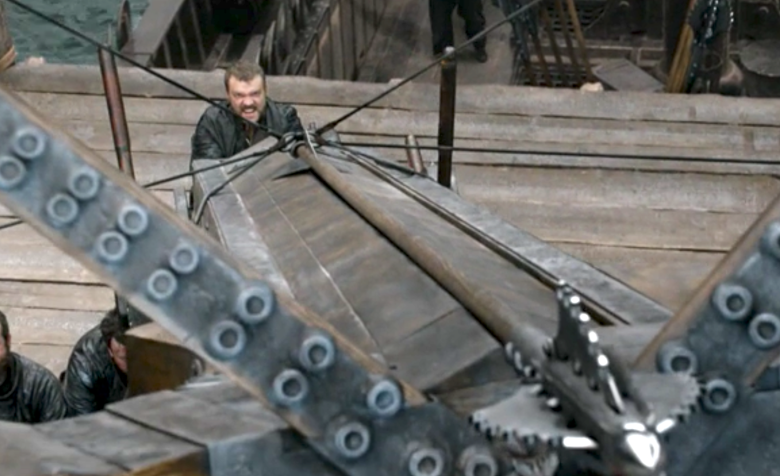 “You have the Greyjoy look that has four extra limbs on it and you’ll notice that there are suckers on the limbs because the kraken or the octopus is on their family crest,” he added. “Later on we see that the Lannister one, and the four limbs kind of disappear off. We just use the two horizontally. We also have a lion’s head on front of it for the Lannister [sigil] and then take the backseat off.”

As confirmed by VFX supervisor Stefen Fangmeier, the range of one of the fired bolts is far greater than dragon fire’s range. Drogon really could not retaliate without putting his apparently very tender dragon neck at risk.

“On a normal crossbow you’re looking at 200 meters, but there’s six limbs on the Greyjoy one, and those two horizontal limbs on the Lannister one. So you can imagine there’s tons of power and torsion on that. You’d be talking miles,” Dunne said.

In the sneak peek for Episode 5, several of the Lannister scorpions can be seen across the battlements, backing up the Golden Company. As for what viewers can expect to see as these scorpions are put into action, Dunne only said, “Let’s put it this way: I wouldn’t say they’d waste the energy on humans.”

Watch a behind-the-scenes video of the Greyjoy scorpion: