Many fans may not agree with the final journey getting there, but after eight seasons, seventy-two episodes and at least two errant coffee cups, the bells have tolled and we have reached the last episode of Game of Thrones.

Stars such as Emilia Clarke, who plays Daenerys Targaryen, Sophie Turner, who plays Sansa Stark, and John Bradley, who plays Samwell Tarly, took to Instagram on Sunday to pay tribute to the HBO show that made them famous.

Clarke shared a photo of her co-stars from the current eighth season, in and out of costume.

“Game of Thrones has shaped me as a woman, as an actor and as a human being,” she wrote. “I just wish my darling dad was here now to see how far we’ve flown. But to you, dear kind magical fans, I owe you so much thanks, for your steady gaze at what we’ve made and what I’ve done with a character that was already in the hearts of many before I slipped on the platinum wig of dreams. Without you there is no us. And now our watch has ended.”

See the cast’s emotional tributes to Game of Thrones: 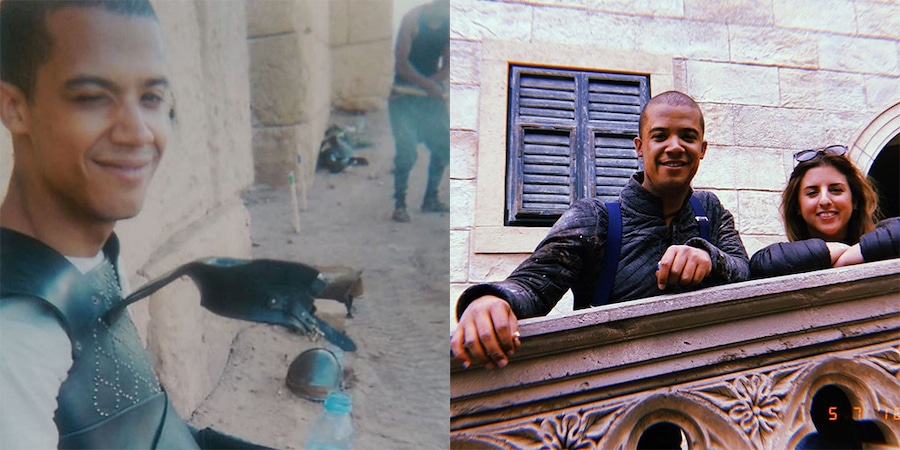 The actor, also known as musician Raleigh Ritchie, posted on his Instagram page photos of him on his first and last days on the Game of Thrones set.

“GoT was like the craziest school trip ever,” he wrote. A 6 year Adventure Weekend. Grey Worm. You went from a robot to a real boy. I’m proud of you. I’ll miss you bud. Thank you to everybody that cared about him and rooted for him. He was really scared at first, but you made him feel loved. He appreciates it. I asked him.”

“Huge shout out to the Targs team: Nats, Emilia, Conleth, Peter, Iain, Ian, Michiel, Reece, Ed, Kit, Liam,” he continued. “Thank you for making the days so fun. Here’s to every single department behind the scenes that worked to the bone to make this show. They worked tirelessly everyday to make this thing, and they never get shout outs and they know that but they do it anyway. Here’s to you, you ragtag bunch of talented clever rascals. I love ya’ll. Thank you. Game of Thrones ENDS tonight on @hbo AT 9pm and @skyatlanticuk at 2am. I hope you enjoy it.” 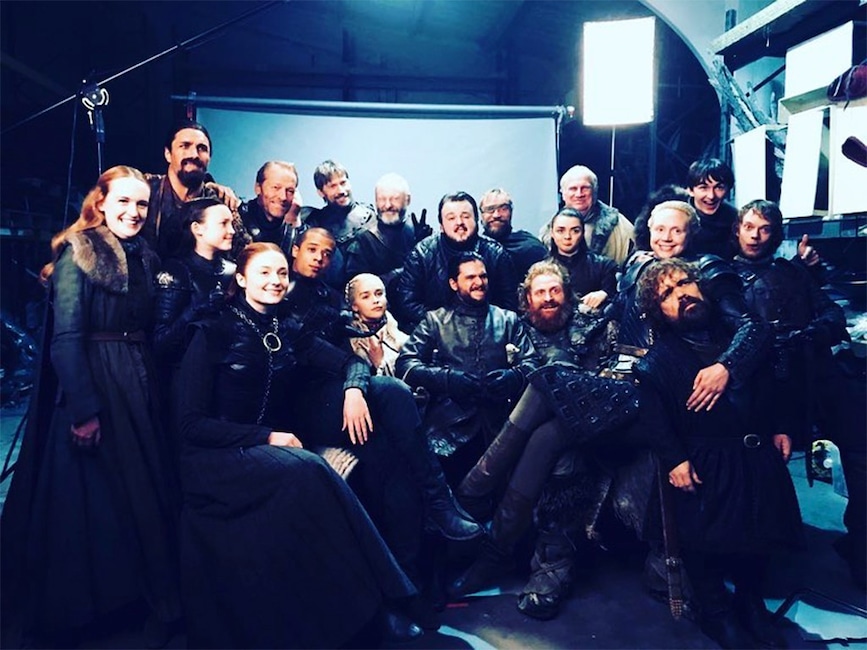 “Sansa, Thank you for teaching me resilience, bravery and what true strength really is,” the actress wrote on Instagram, alongside this photo. “Thank you teaching me to be kind and patient and to lead with love. I grew up with you. I fell in love with you at 13 and now 10 years on.. at 23 I leave you behind, but I will never leave behind what you’ve taught me. To the show and the incredible people who make it, thank you for giving me the best life and drama lessons I could have ever asked for. Without you I wouldn’t be the person I am today. Thank you for giving me this chance all those years ago. And finally to the fans. Thank you for falling in love with these characters and supporting this show right through till the end. I’ll miss this more than anything.” 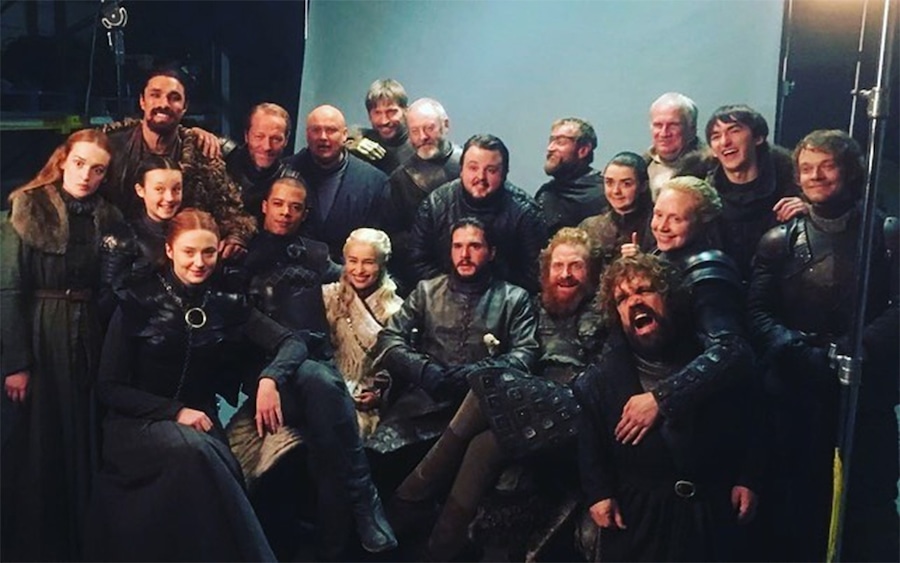 The actress posted on Instagram photos of the season eight cast together, in and out of costume…presumably before things went south for some of the characters. 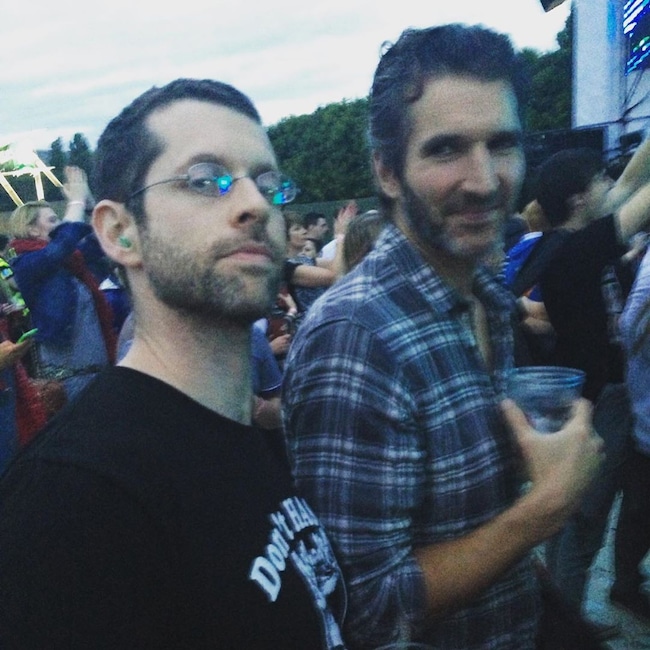 The actor posted on Instagram a treasure trove of behind-the-scenes photos hours before the Game of Thrones series finale. In this one, creators David Benioff and D.B. Weiss are seen. 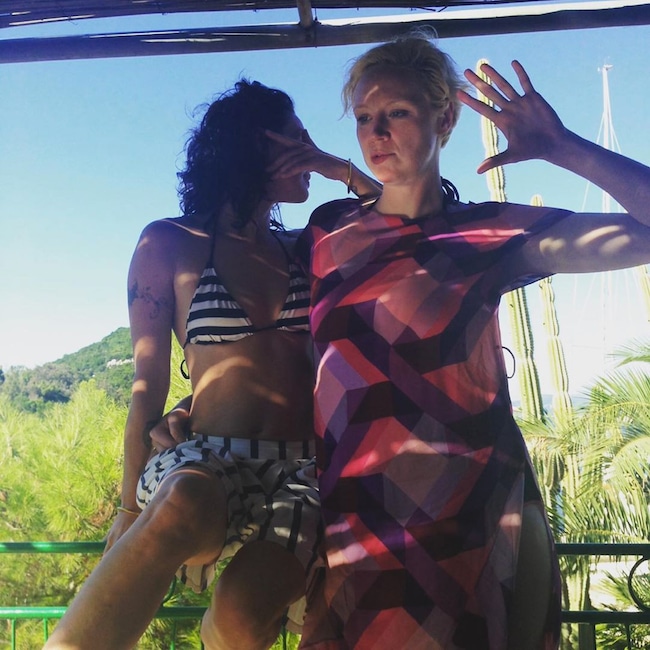 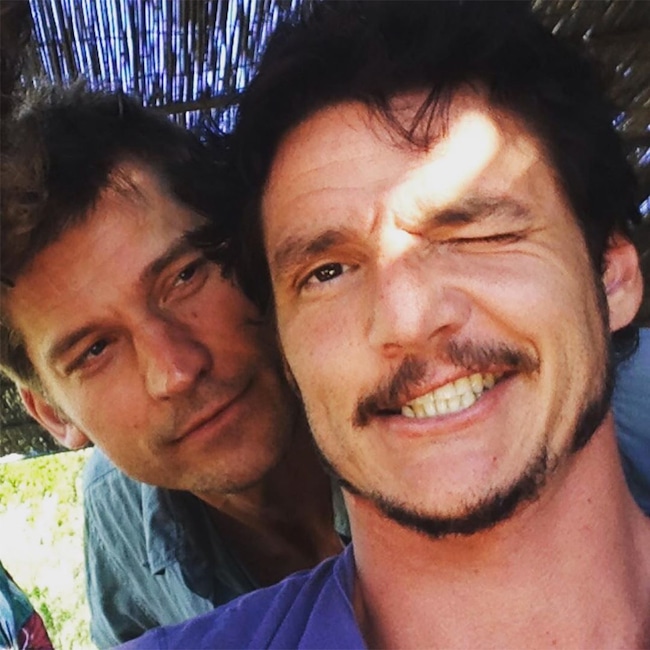 The actor shared this photo of him with co-star Nikolaj Coster-Waldau (Jaime Lannister). 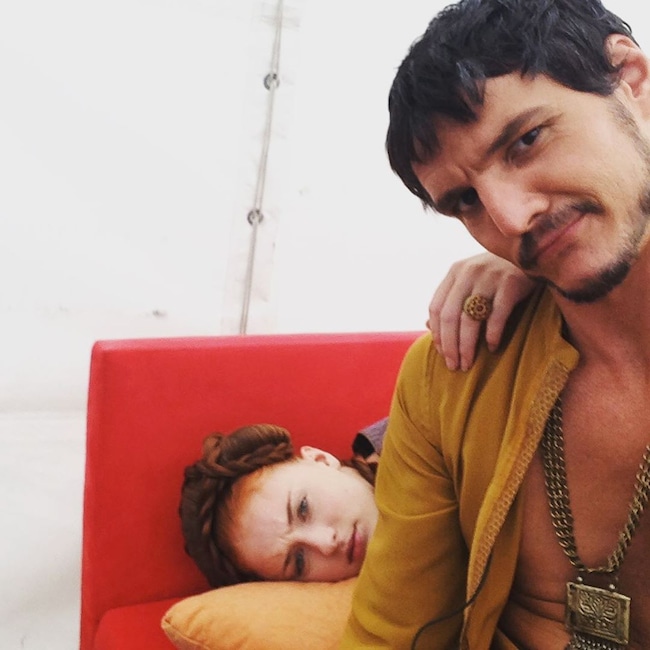 The actor shared this photo of him with co-star Sophie Turner (Sansa Stark). 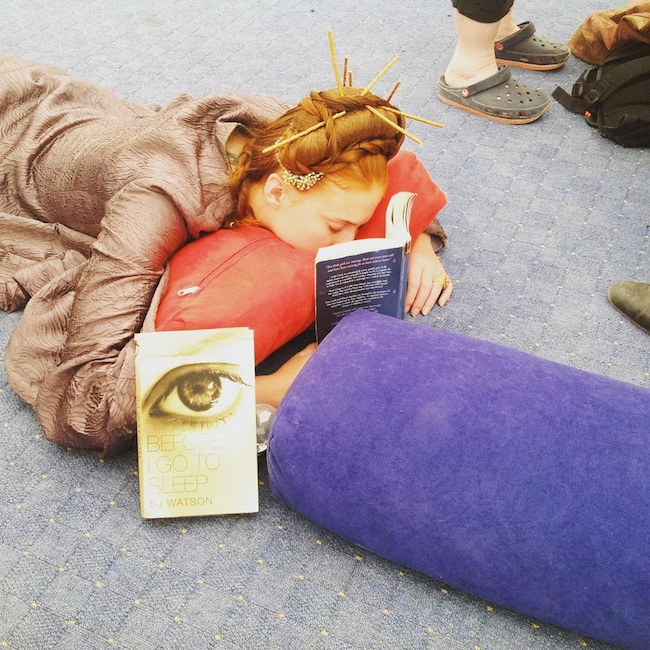 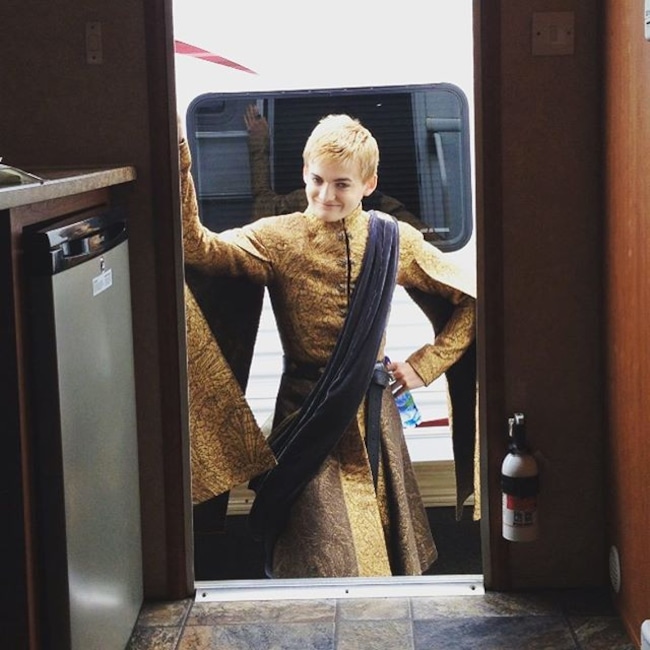 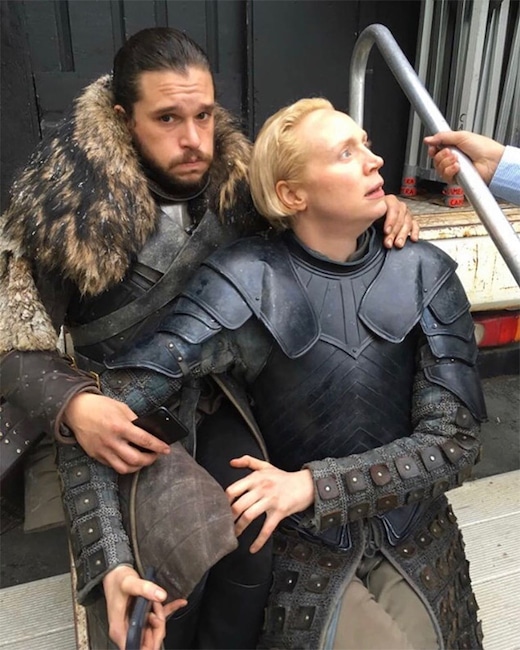 The actress posted this photo of her and Kit Harington (Jon Snow), writing, “BEING TOLD THE ENDING TO @gameofthrones.” 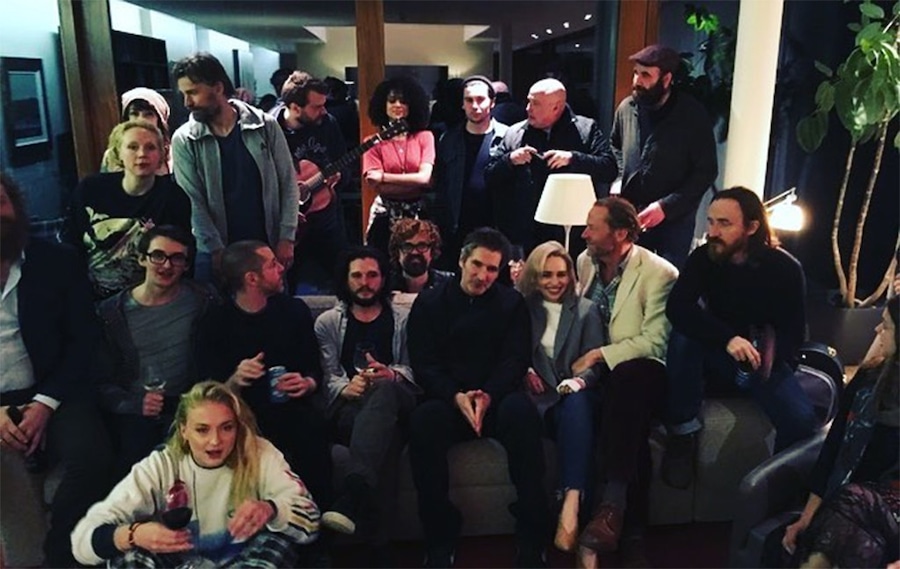 “Finding the words to write this post has left me overwhelmed with how much I want to say but how small words feel in comparison to what this show and Dany have meant to me,” she wrote in her Instagram post. “The mother of dragons chapter has taken up the whole of my adult life. This woman has taken up the whole of my heart. I’ve sweated in the blaze of dragon fire, shed many tears at those who left our family early, and wrung my brain dry trying to do Khaleesi and the masterful words, actions (and names) I was given, justice.”

“Game of Thrones has shaped me as a woman, as an actor and as a human being. I just wish my darling dad was here now to see how far we’ve flown. But to you, dear kind magical fans, I owe you so much thanks, for your steady gaze at what we’ve made and what I’ve done with a character that was already in the hearts of many before I slipped on the platinum wig of dreams. Without you there is no us. And now our watch has ended. @gameofthrones @hbo #love #motherofdragonsoverandout.” 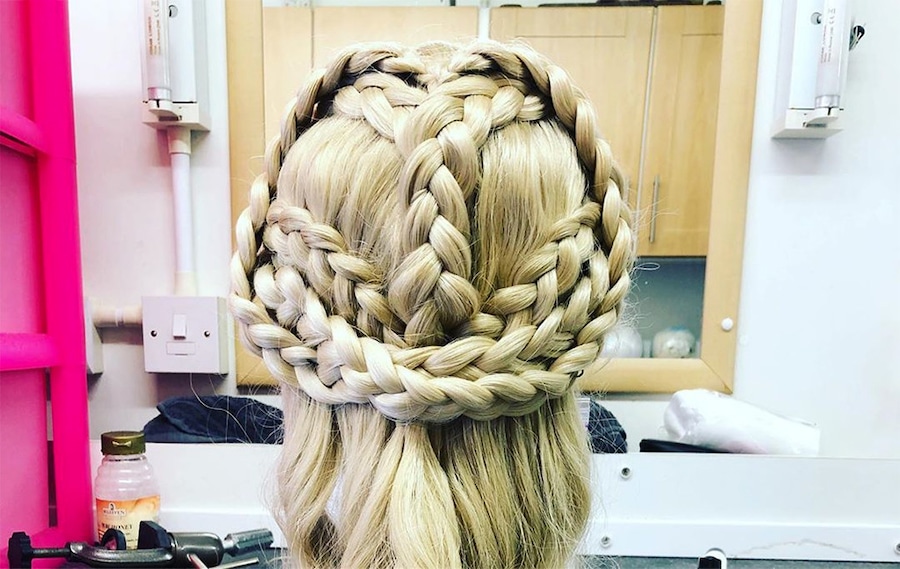 The actress also posted a close-up of her character’s wig—the last of several worn over the years, and the most braided. 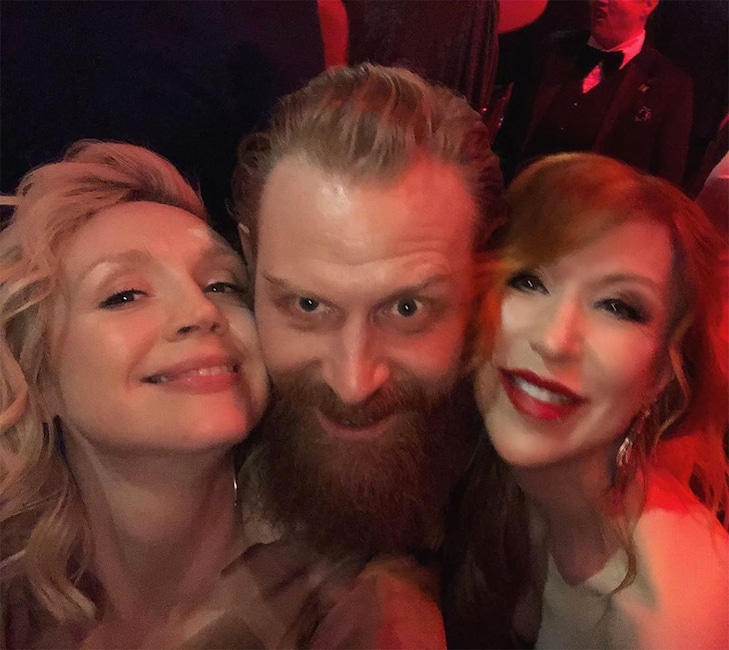 One of the show’s most beloved stars shared this selfie of him with real-life wife Gry Molvær Hivju and Gwendoline Christie, who plays his crush Brienne of Tarth. He wrote, “Onscreen and offscreen love! Definitely a win win situation:-) Homage to Gwendoline Christie @gwendolineuniverse for her brilliant preformance as the warrior, the knight and the beautiful human being Brienne Of Tarth #GOTafterparty With my wife @grymolvaerhivju #gameofthrones #brienneoftarth #tormund #brimund #tormundgiantsbane #newyork.” 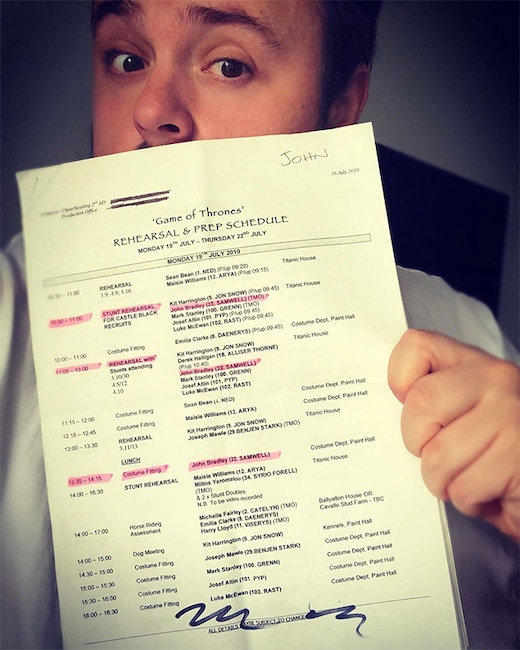 On the day of the Game of Thrones series finale, the actor posted on Instagram a photo of him holding up his rehearsal and prep schedule for his first-ever episode, the fourth in season one, writing, “So tonight we have our very last episode. It’s the final step of a long and wonderful journey. A journey that, for me, started at 10am on Monday 19th of July 2010. I know this because recently I found my rehearsal and prep schedule for season 1, week 1. This was given to me when I landed in Belfast for the first time, weeks before we even started shooting.”

“Listed here is the rehearsal where I first met Kit [Harington], and the first time I wore the costume that’s seen me through 8 seasons,” he continued. “I’m glad I kept this. I met so many people that week who have come to mean so much to me. Back then we couldn’t have known the journey we’d go on together. I wouldn’t swap that experience, or those people, for the world. Enjoy the episode and thanks for everything. ❤️❤️❤️ @gameofthrones @hbo #GOT.” 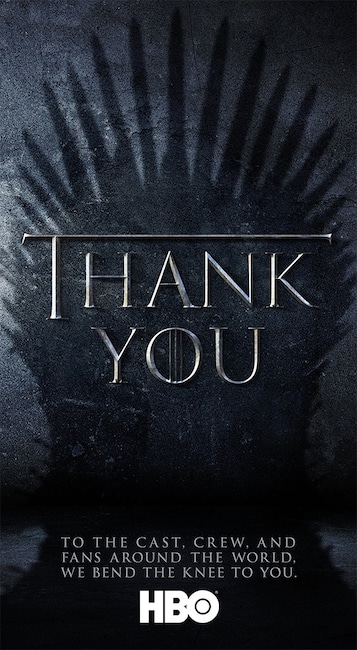 A message to the fans was posted on the HBO series’ Twitter page hours before the finale.

And check out more behind-the-scenes photos of the Game of Thrones cast.