House of the Dragon Finale: Emma D'Arcy, EP on How [Spoiler]'s Death 'Moves the Goal Posts of Suffering'

This post contains spoilers from House of the Dragon‘s Season 1 finale. Proceed accordingly.

I spy, with my sapphire eye, a world of hurt coming for the Hightowers in House of the Dragon Season 2.

The HBO series’ Season 1 finale on Sunday ended with Queen Rhaenyra receiving the news that her second-born son, Lucerys “Luke” Velaryon, had been killed by a dragon ridden by Alicent’s son, Aemond Targaryen. Though earlier in the episode Rhaenyra had counseled patience when trying to figure out when and how to go to war with the Hightowers, the finale’s final moments showed a grieving Rhaenyra who clearly wants to avenge her son. (Read a full recap.)

“Somehow, I think this moves the goal posts of suffering,” series star Emma D’Arcy, who plays Rhaenyra, says in the “Inside S1 E10” featurette available on HBO Max. “Once you’ve lost both your parents and you’ve lost a lover, you think you know grief. And I think what’s so awful is that losing Luke tells her she knows nothing about grief, and it changes her outlook on the world going forward.” 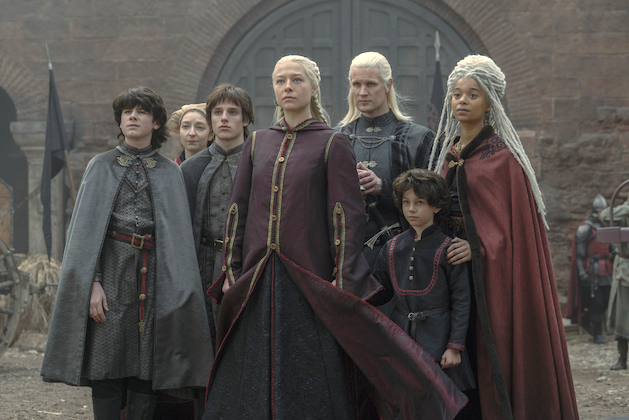 Executive producer and co-showrunner Miguel Sapochnik points out that Luke’s dragon, Arrax, never had any real hope of fighting the much larger Vhagar, piloted by Aemond (who earlier in the episode revealed that he’s now wearing a sapphire in the socket previously inhabited by the eyeball Luke gouged out years before). The smaller dragon’s only recourse was to fly faster and escape. And that’s what seemed like had happened… until Vhagar went rogue and made a snack out of the smaller beast and his rider.

Aemond cried, “No!” as it happened and looked bereft after; Sapochnik says that’s when you’re seeing “the last vestiges of the little boy that’s left in Aemond.”

He adds: “Maybe he was trying to scare Luke, but I don’t think ultimately he intended to kill him. But now he’s done it, and he has to decide whether or not he’s going to own it in his travel back to King’s Landing. Because obviously, if usurping the throne and their crowning Aegon in the dragon pit wasn’t the start of the war, killing one of the queen’s sons is.”

What did you think of the finale? Hit the comments with your thoughts!