How Andor Created the Best Star Wars Villain in Years

“It’s like a great play,” she told IndieWire over Zoom, speaking of how everything on “Andor” came together with the writing as its foundation. “Get out of the way. Don’t overthink it, don’t try and manage things or get out in front of it. You let it carry you along.”

Like many of her cast mates, Gough was not a self-identified Star Wars fan when she signed on for “Andor” — growing up with brothers, she suspects she watched them as a child — but Gilroy didn’t see that as a problem. Gough was hooked from reading scripts for the first three episodes (which Dedra isn’t even in) and then asked Gilroy to tell her more.

“He used the word badass, but also the word fascist,” Gough recalled. “He was like, ‘She works harder than everybody else,’ and we did talk about the idea… that she’s surrounded, in a very male-dominated place. It felt to me that I was gonna play a woman that really had to prove herself, but what’s exciting about that is she’s the underdog. We’re kind of drawn as an audience to support the underdog, aren’t we?” 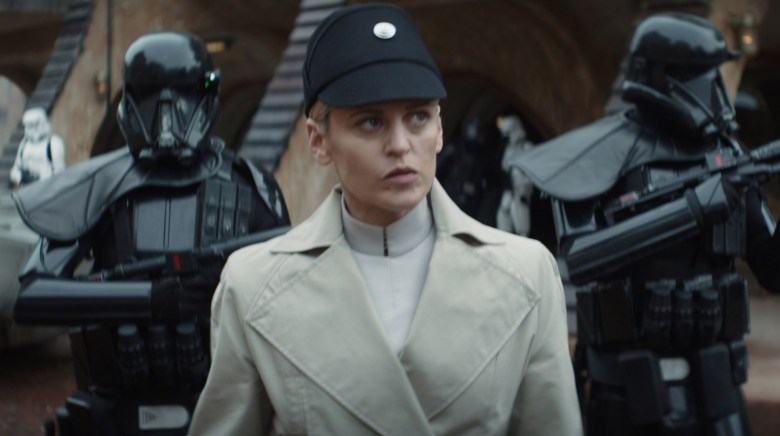 Indeed, Gilroy expressed the same sentiment in an IndieWire interview from November, including how it feels to pull the rug out from viewers rooting for Dedra’s work ethic. In Episode 9, she tortures Bix Caleen (Adria Arjona), a scene which Gough was shocked to watch back and see her face twitch — something she had never done before and couldn’t consciously recreate. Gough remembers having immense shooting the scene with Arjona and Joshua James as Doctor Gorst.

“I was so excited to do that,” she said. “I always like to like offer up a first take without direction initially, just my gut instinct… I was furious that they didn’t clap at the end of it. I was like, ‘This is theater! You’re watching theater!’”

Gough has all the respect for process, but for a role like this she didn’t want to take herself too seriously or over prepare. She credits her costars and the production for making her feel “like a kid in a sweet shop.”

“My first experience of being in Star Wars was being in Ferrix,” she said, still in awe. “You arrive, the car drops you at a little village and you get out and there’s aliens walking around and shops full of stuff. I tried to do as little as possible to get in the way of what happens when it all comes together.”

And when it came to Dedra herself, Gough didn’t need much material beyond her character’s ruthless fascist ideology. While Gilroy found the seeds of revolution sprinkled all over world history, Gough looked to the rogues gallery already in her TV queue.

“I just always think that scene with Gus Fring before he murders that guy, when he takes his shirt off first and hangs it up,” she said, citing Giancarlo Esposito’s “Breaking Bad” and “Better Call Saul” villain. “That’s very Dedra.”

Another inspiration, or perhaps counterexample, came in the form of Yvonne Strahovski as Serena Joy in “The Handmaid’s Tale.”

“There’s a scene in the new season where she kind of turns on her feminine thing,” Gough said. “I was thinking ‘Oh my god she and Dedra are totally cut from the same cloth,’ but what Serena is able to do is go into sensuality, and Dedra just can’t do that. She starts to short circuit.”

She doesn’t say that lightly; Dedra’s sensuality, or lack thereof, was considered from the beginning, and Gough was particularly adamant that her character not be redeemed or rescued.

“The payoff is just so juicy,” she said. “She’s not just gonna fall in love and become good. [Gilroy] laughed at me when I asked that. He just doesn’t do stuff like that, Tony. [The writers] don’t make women like that. Every character is more interesting than it would be with lesser writers.” 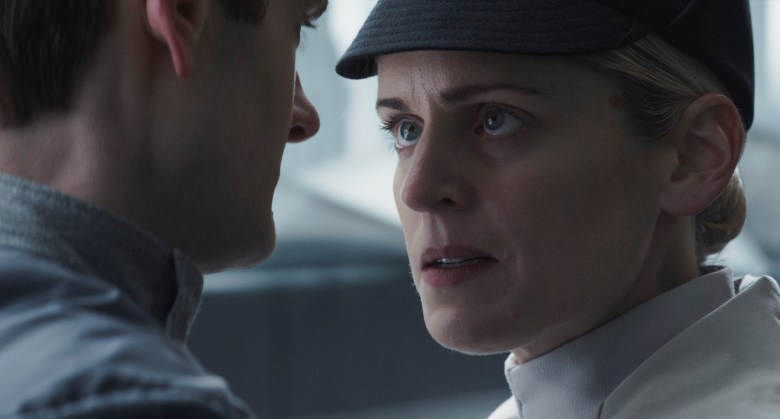 In the finale, Dedra finds herself overpowered by a crowd of rioting civilians, separated from her guards and her weapon. Syril pulls her out, and Gough plays shock, aggression, gratitude, and Dedra’s revulsion at her own vulnerability.

It was the first scene she and Soller filmed together.

“I’m never really nervous of the work, but I was just like ‘What if Dedra’s getting rescued? What if I build this woman and she gets rescued by a guy?’” Gough said. “Myself, Kyle, and Ben talked about what that would look like, and it became so much more interesting.”

It comes down to the scripts again, to a brief but potent few lines and less than 40 seconds of screen time. After grabbing the nearest weapon, ready to murder whoever breached her “forcefield of ‘get away from me,’” a shaking Dedra says, “I should thank you.”

“You don’t have to,” Syril replies.

“At that point, you’re just human,” Gough explained. “You’re not Dedra from the ISB. We didn’t actually have to think of it as a rescue, we just let the emotion of that moment happen… I didn’t expect it to have such an impact, but it’s so short because you don’t want to see too much of that Dedra. We’ve kept her so icy cold and you have just moments of ‘What’s under that? What would happen if she lost it?’ So I don’t know where — well I do know where it’s gonna go, but I’m not going to tell you.”

Wherever it goes, Gough seems entirely at peace with Gilroy’s leadership as head writer and showrunner. She recognizes the gift not only of great material, but of being part of a project that knows exactly how to utilize every team members skills and artistry.

“I said to Tony the other day — he was talking me through Season 2, and he was talking about a certain scene and I said, ‘Look, whatever,’” Gough said. “He said ‘No, not whatever!’ And I said ‘I’m not saying that that I don’t care. I’m just saying that whatever you give me, Tony, I know it’s the right thing.’ There’s so little to battle with. We’ve gotten really lucky. It doesn’t always happen like this, and he’s the one that’s made it all happen.”