As Iceland's entry Hatari make it through to the final, we look at how the family friendly singing contest has changed, with 7 ft giants, gnomes and milkmaid dancers. 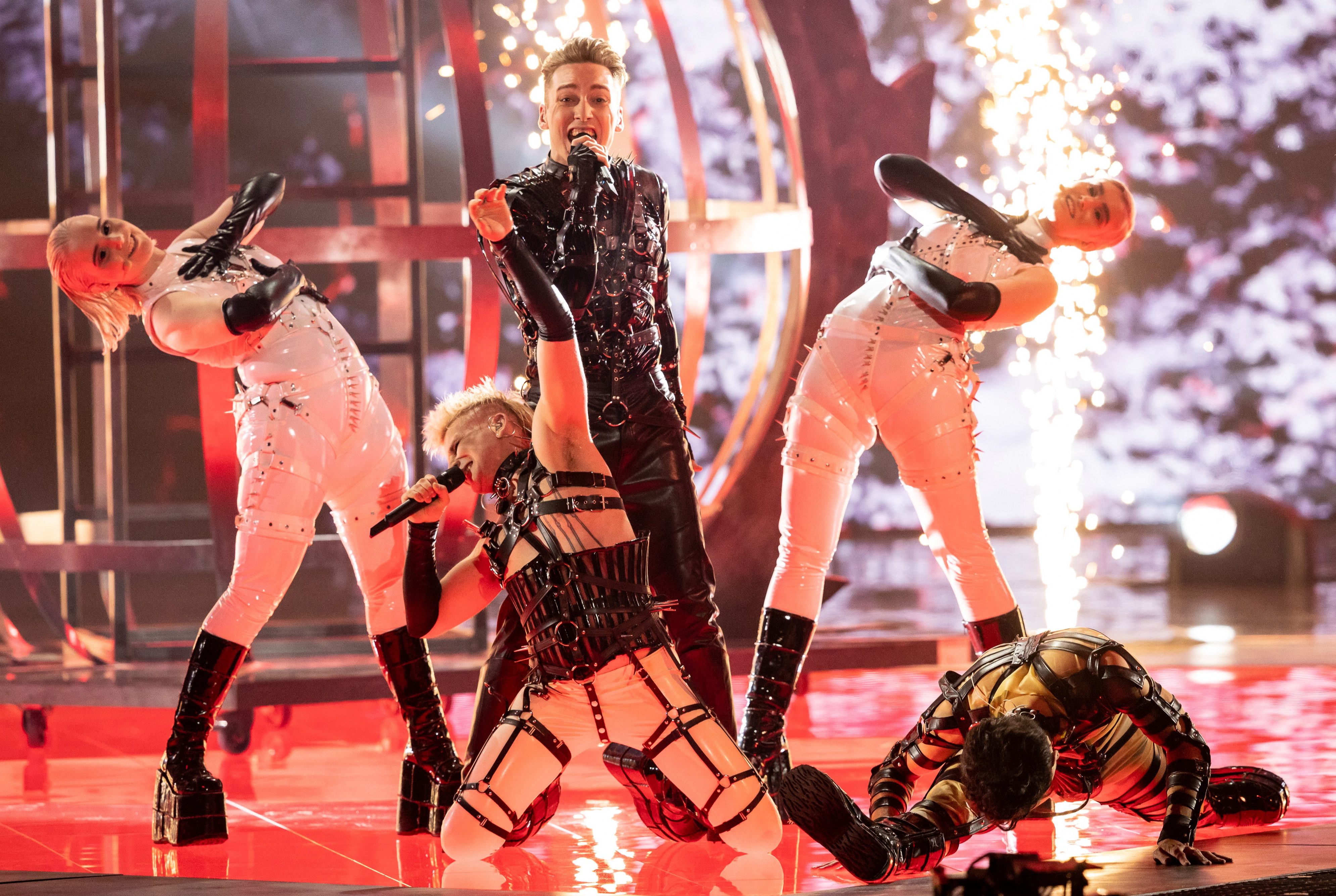 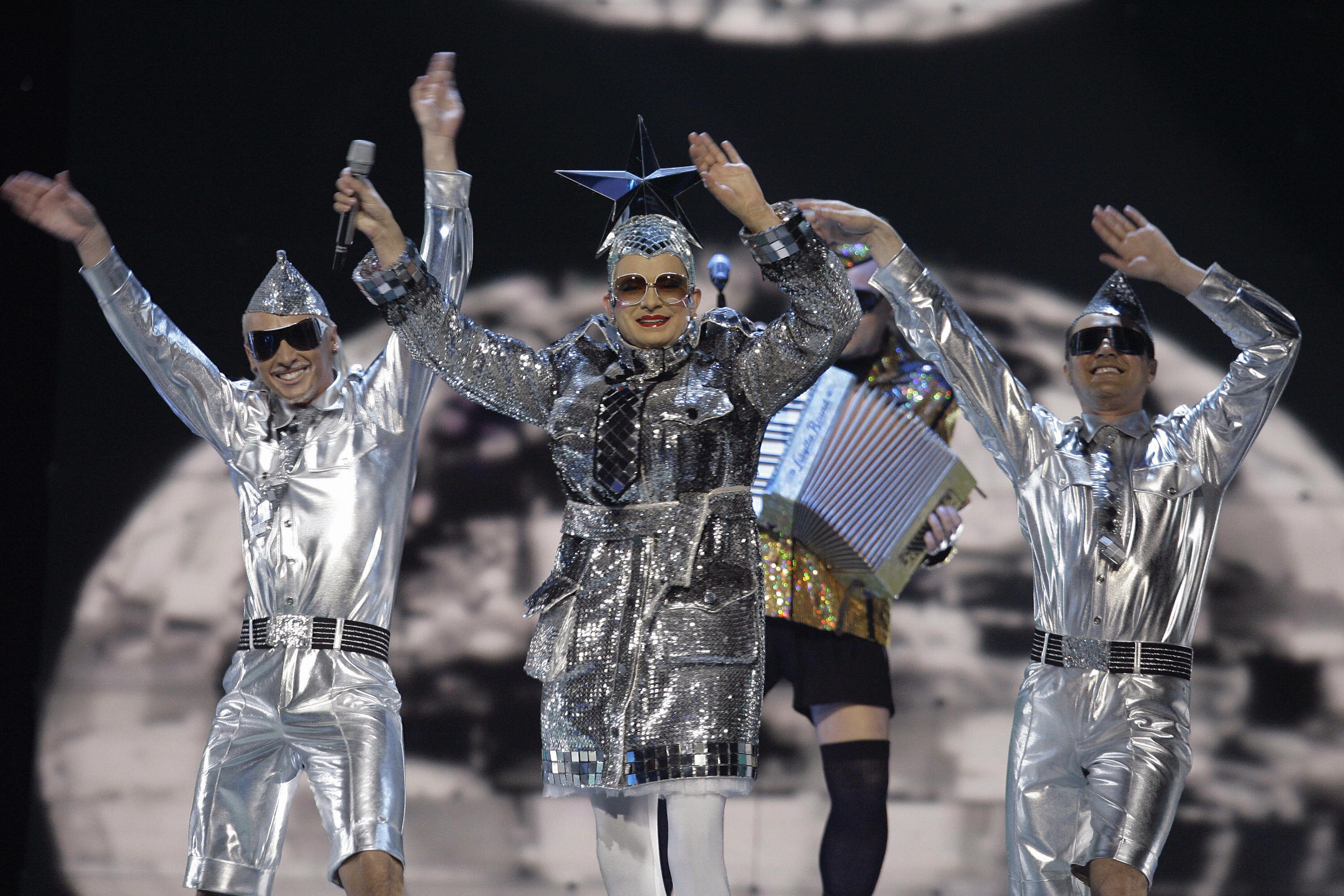 The annual singing competition was launched in 1956 to bring previously war-torn Europe together with a "light entertainment programme" – but since then it has changed a lot.

Appearing to have rolled around in kitchen foil and stumbled off the Yellow Brick Road and into a camp disco, the singer and dancers put on an energetic performance that left the crowd open-mouthed.

And their bizarre entry paid off – they made it to second place in the show held in Helsinki, Finland. 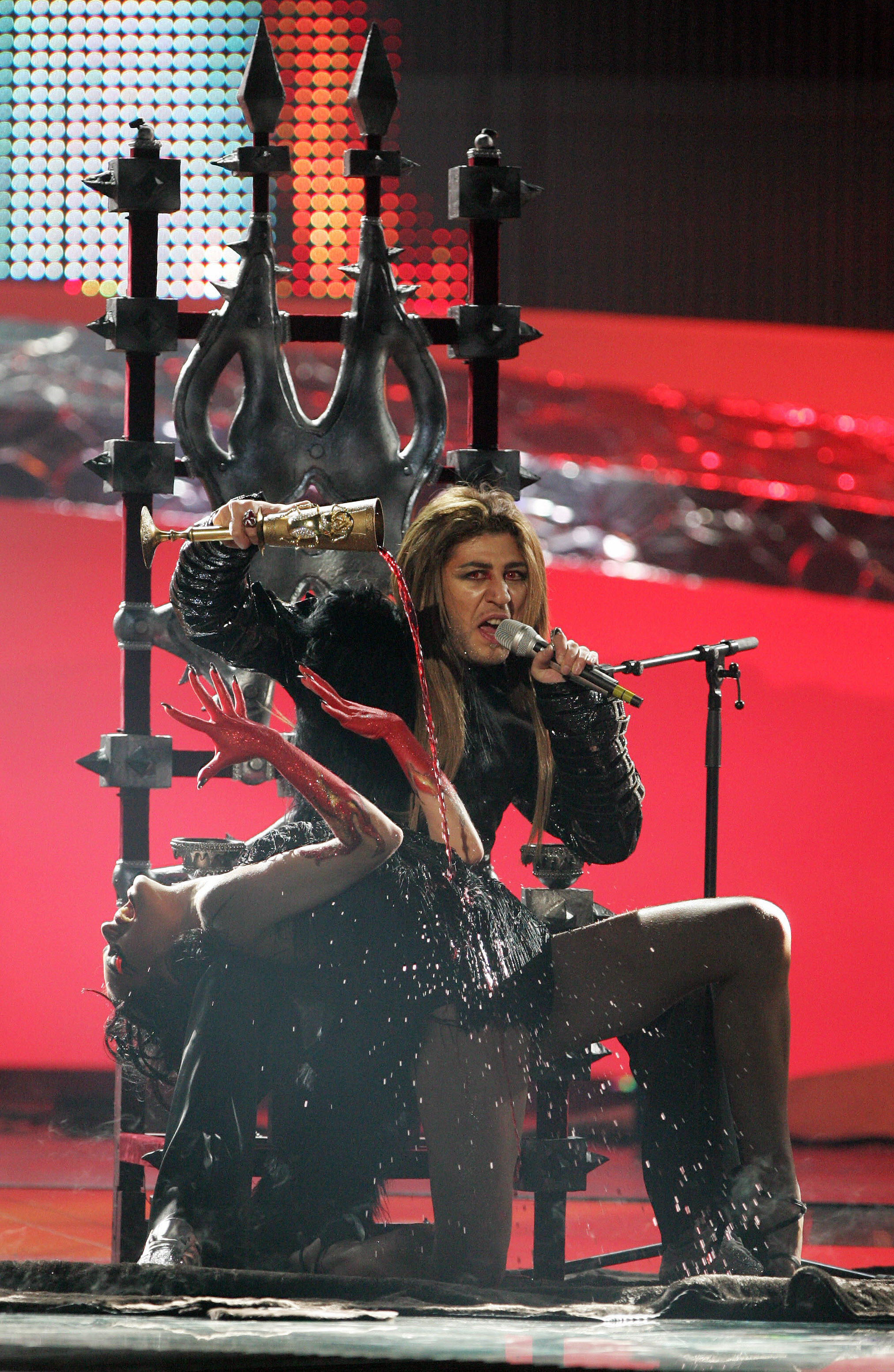 With their first ever appearance in the contest, Azerbaijan went all out with Elnur & Samir's 'Day After Day' in Belgrade, Serbia.

The singers each performed in angel and devil costumes – with the latter at one point pouring 'blood' from a goblet on to a dancer from his throne. 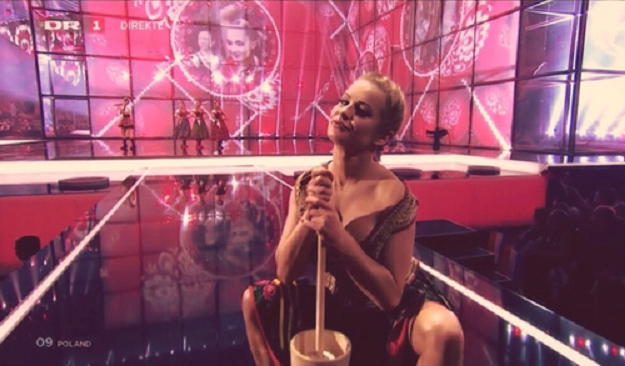 Poland ensured they were remembered in Copenhagen, Denmark, in 2014.

Donatan and Cleo performed 'My Slowianie – We Are Slavic', which featured the lyrics: "Vodka is better than whisky and gin."

But the most outrageous moment of the set came when a number of sexy milkmaid dancers burst onto the stage.

They went on to suggestively pretend to churn butter and scrub clothes, causing quite the stir on Twitter. 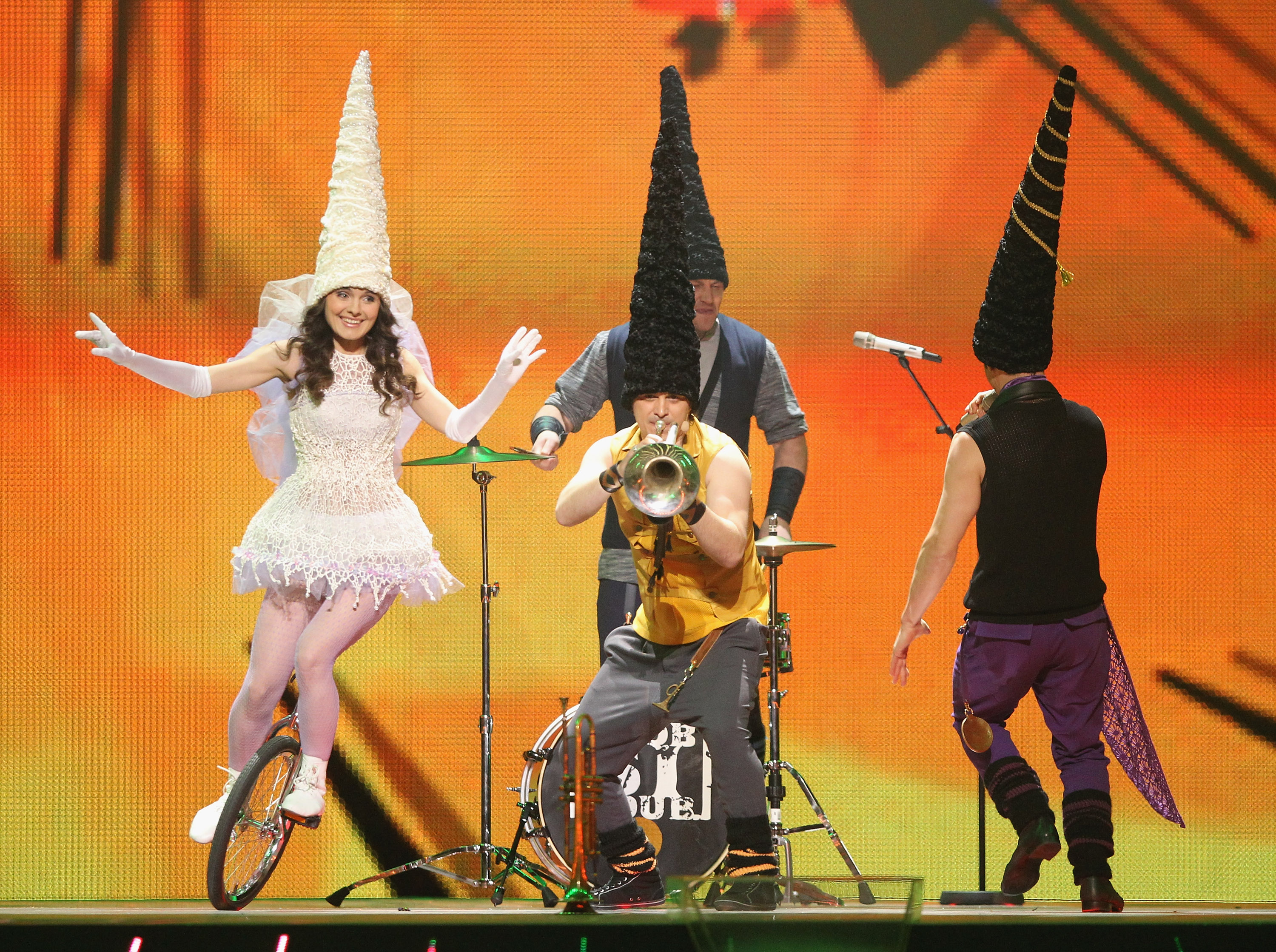 Demonstrating how you can be a hit on Twitter but still come 12th were Moldova in Dusseldorf, Germany in 2011.

The Gypsy punk band Zdob si Zdub performed their song 'So Lucky' with the addition of tall pointy dwarf hats and a girl on a unicycle. 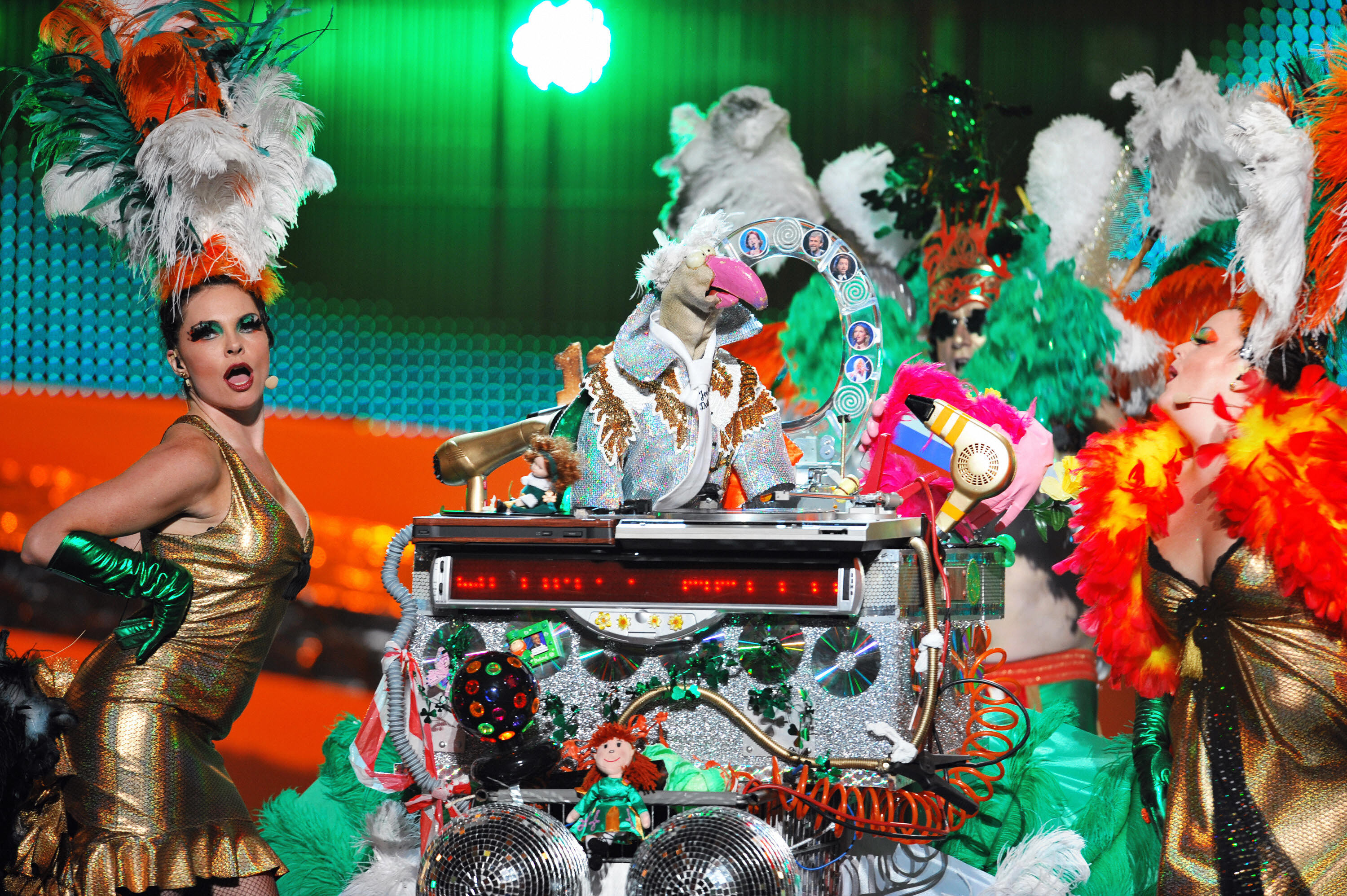 While not quite making it to the grand final of the 2008 competition, Irish children's TV presenter Dustin the Turkey became a Eurovision fan favourite with the song 'Irelande Douze Pointe'.

It was a mock entry, designed to make fun of the contest, and featured the lyrics: "Drag acts and bad acts and Terry Wogan's wig." 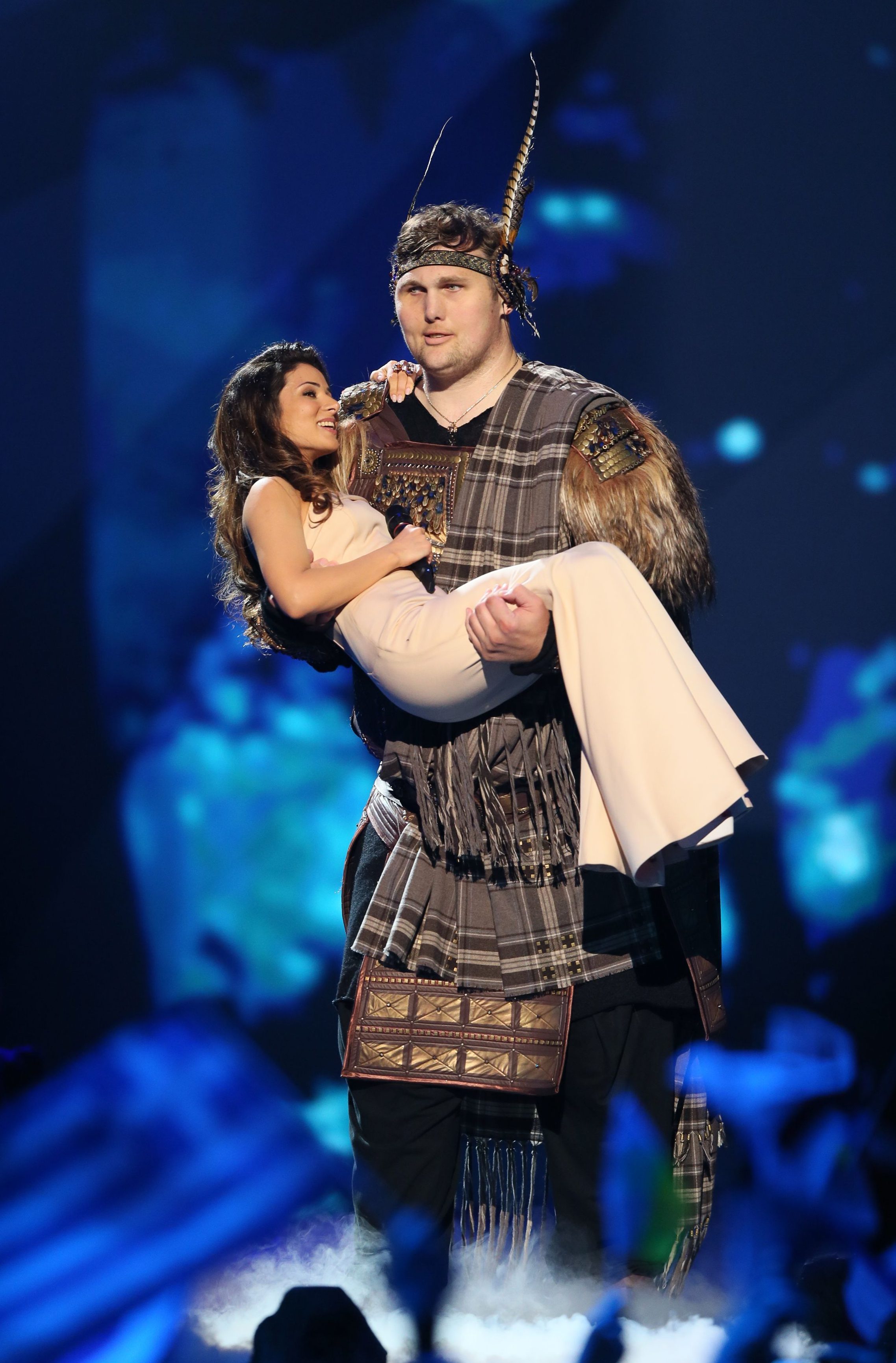 The singer for Ukraine's 2013 performance, Zlata Ognevich, made quite the entrance when she was carried on stage in Malmo, Swede,n in the arms of a giant man dressed in medieval garb.

Igor Vovkovinskiy is 7 feet 8.33 inches, and when not carrying women around stages the 36-year-old is a law student and part-time actor.

He was born in Ukraine, but is now living in Minnesota and is currently the tallest person in the United States.

Despite appearing for only 20 seconds, he was an instant hit with viewers on Twitter who said they would vote just for him. 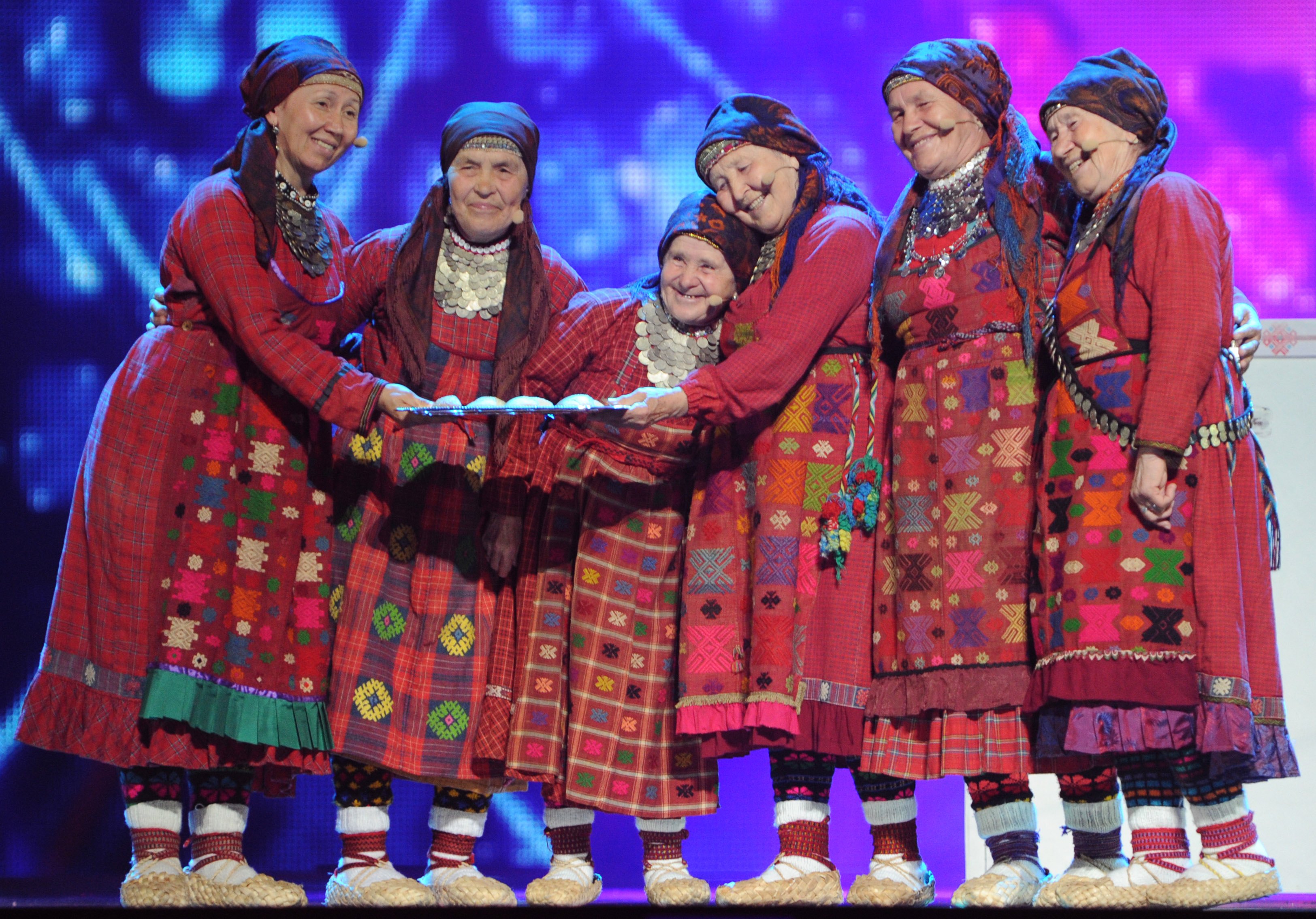 When a group of little old 'grannies' walked on stage in traditional Slavic dress during Russia's 2012 performance, no one expected them to get up and start dancing to an up tempo beat while cooking bread buns.

Buranovskiye Babushki – an ethno-pop band made up of six elderly women from the village of Buranovo, Udmurtia, were elected by their nation to represent them – with their bubbly 'Party For Everybody'. 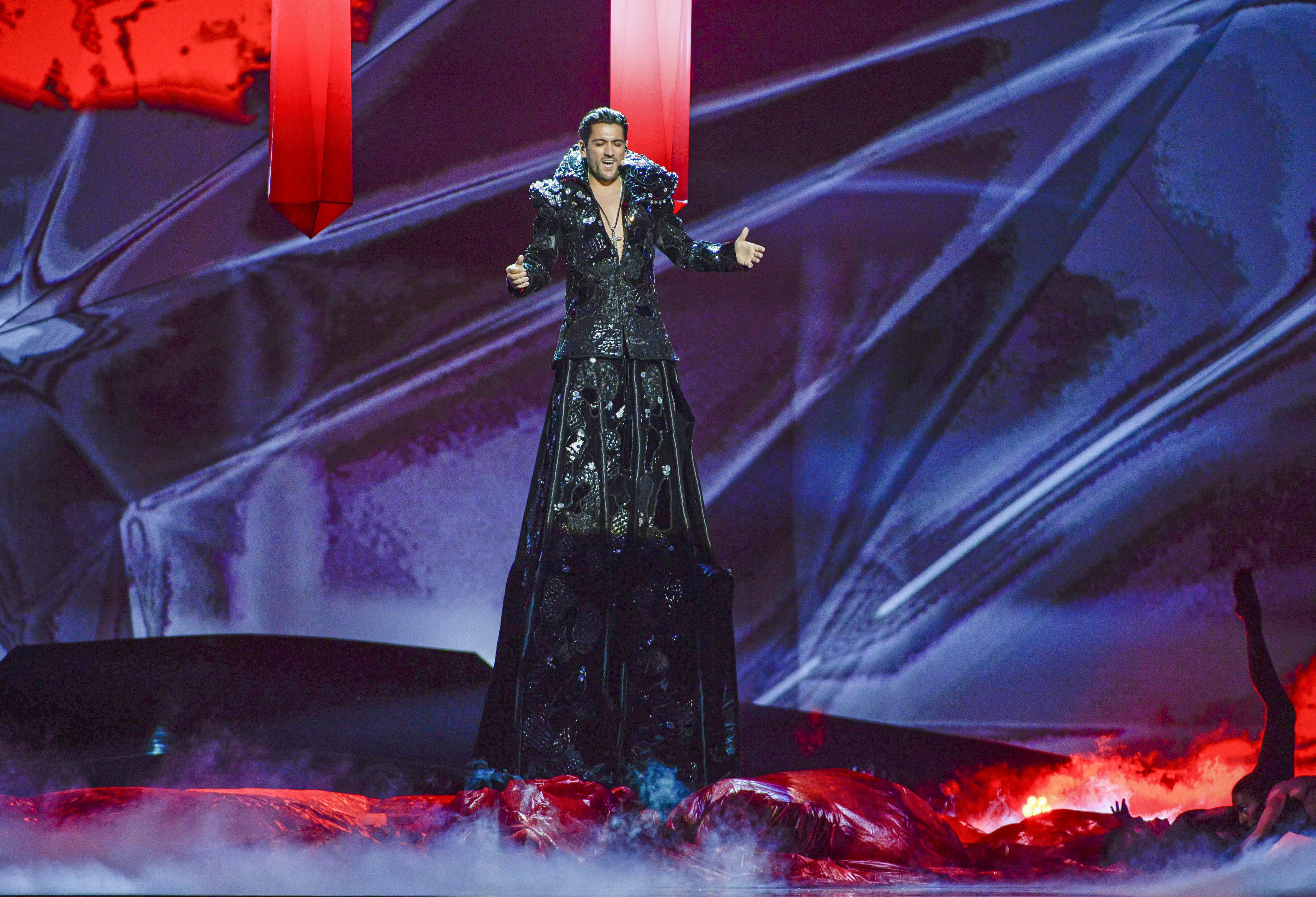 Forty seconds into the performance, three semi-naked dances emerge beneath red cloth and perform interpretive dance around him. 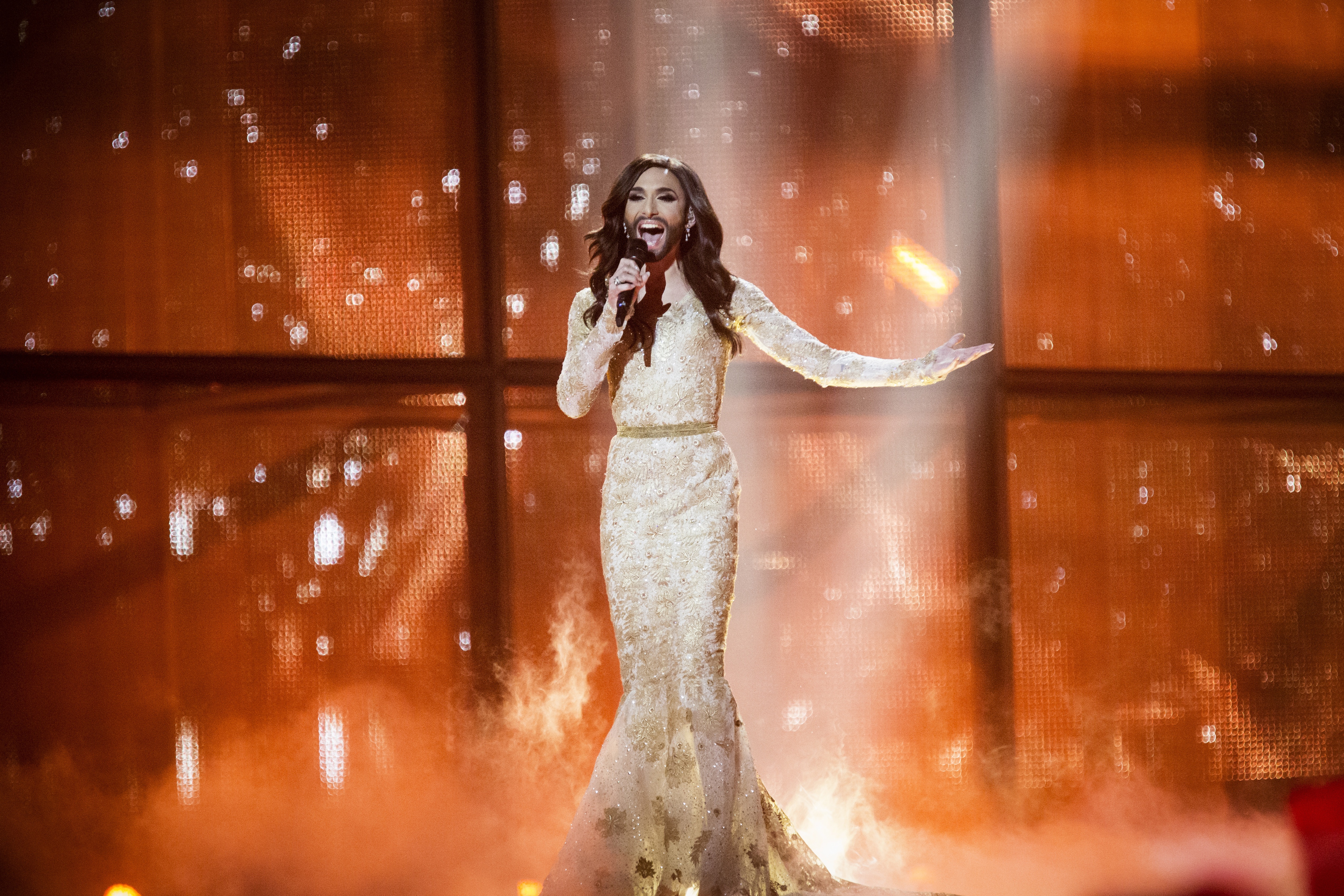 The winner of the 2014 contest in Copenhagen, Denmark was Austria's Conchita Wurst – real name Thomas Neuwirth, a singer and drag queen – who captivated viewers with her 'Rise Like A Phoenix'.

However, not everyone was so keen, with legendary Eurovision commentator, the late Terry Wogan, calling the performance a "freakshow".

Since winning, she has become a global gay icon and revealed last year that she is HIV positive. 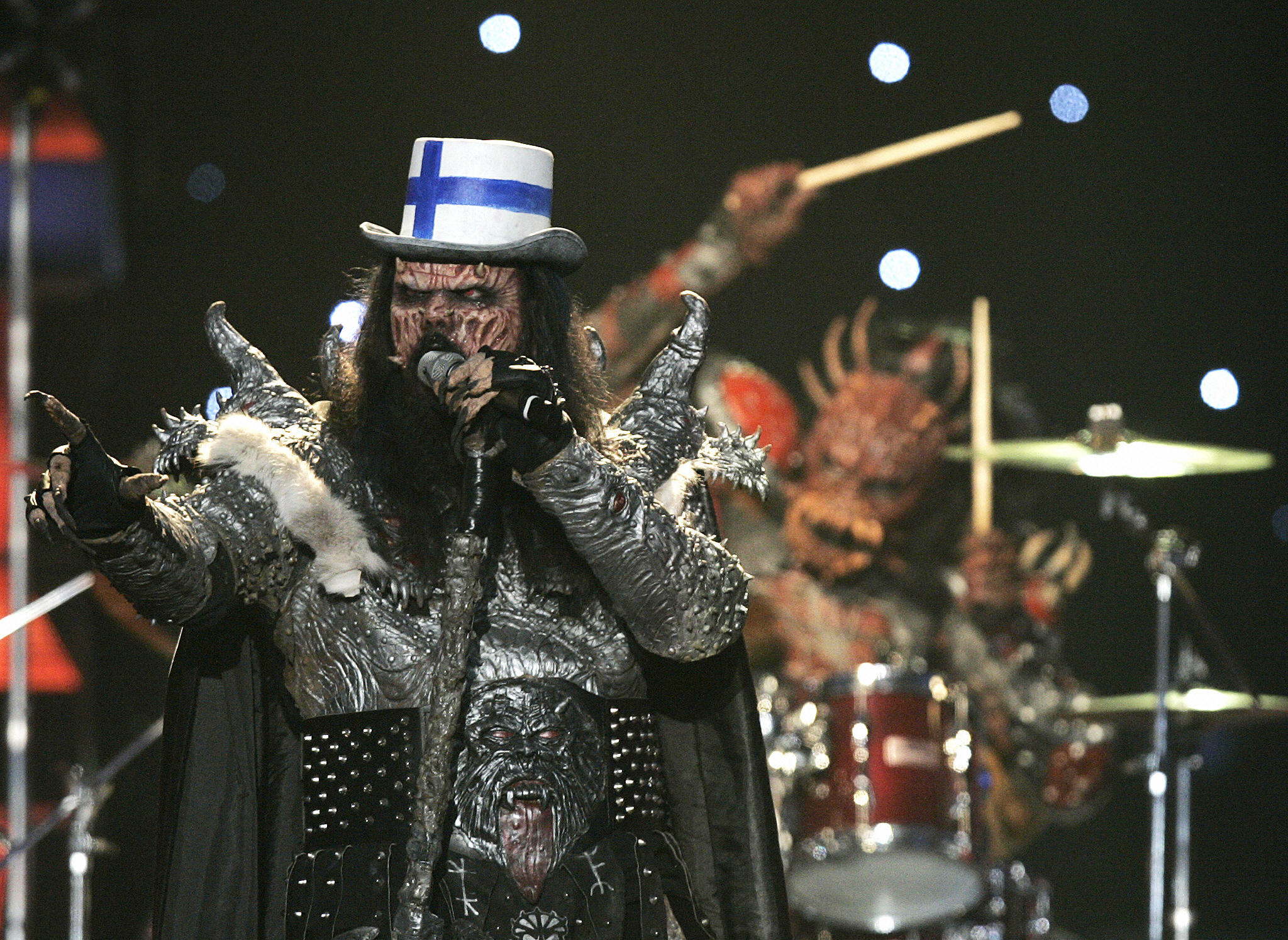 And, despite initial embarrassment in Finland, they were glad they did – the band, who are platinum-selling in their native country, nabbed the top spot in Athens, Greece with their theatrical 'Hard Rock Hallelujah'. 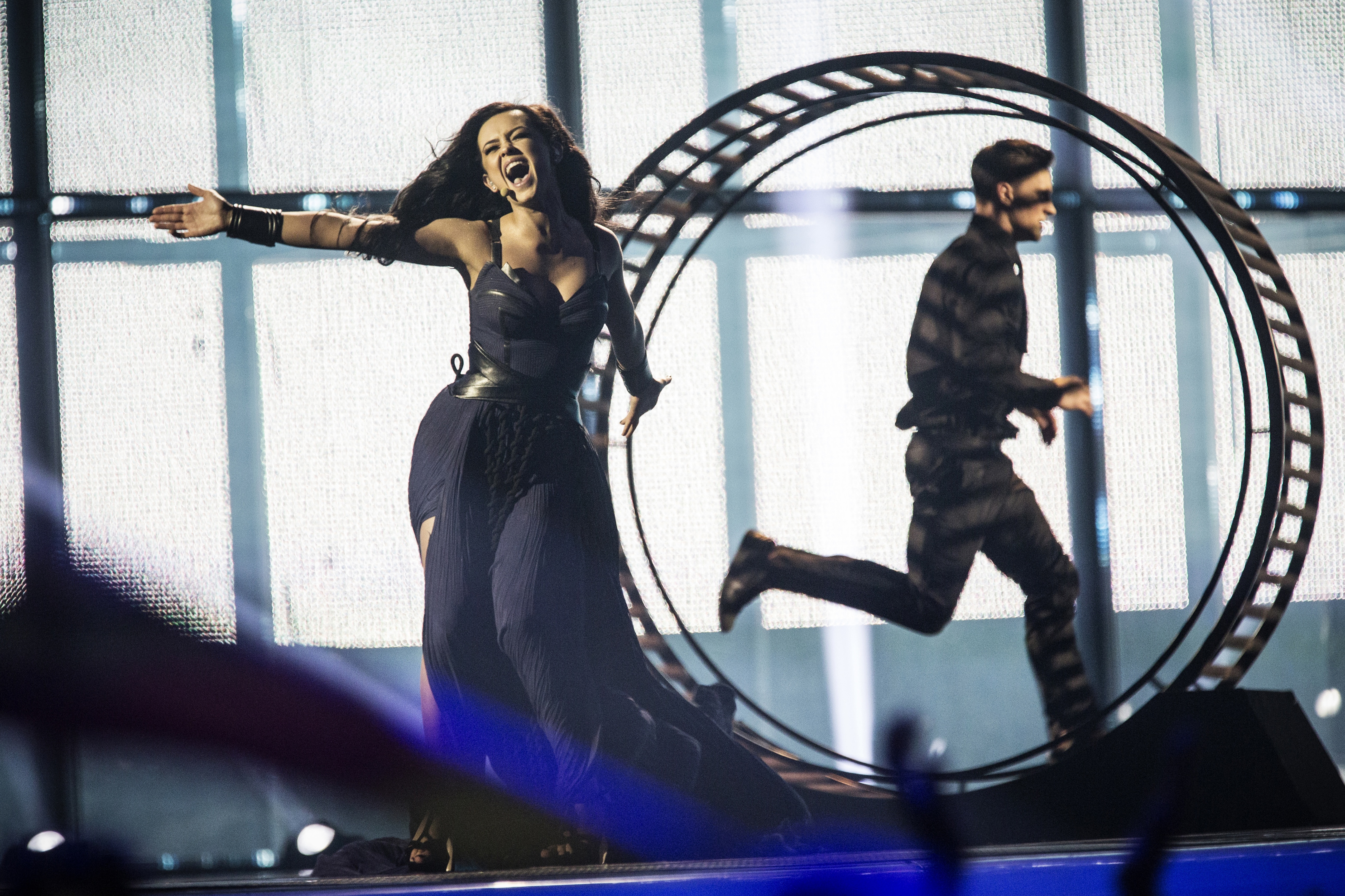 Pop star Mariya Yaremchuk belted out her song 'Tick-Tick' for the 2014 Eurovision – but it wasn't her everyone was looking at.

Behind her, model Igor Kuleshyn was seen running on what appeared to be a human-sized hamster wheel for the duration of her song.

"Eurovision has started to be defined by the narrative that exists around it – it gets the joke, and is happy to play up to it.

"It’s a race to the top of the hashtag leader board, rather than votes."