How to Wreck a Vampire House? What We Do in the Shadows Crafts Comedy Out of Its Production Design

Across the first three seasons of “What We Do in the Shadows,” the most consistent source of humor has been finding ways for its creatures of darkness to fumble the mundanities of modern life; everything from dating to collecting membership dues is slightly beyond these monsters frozen in time. But Season 4 introduces a ripe new problem for the vampires to misunderstand and bungle: basic home maintenance.

The Season 3 finale saw Nadja (Natasia Demetriou), Nandor (Kayvan Novak), and, unwillingly, Guillermo (Harvey Guillén) depart their Staten Island lair for adventures abroad, leaving Laszlo (Matt Berry) behind to care for a reborn Colin Robinson (Mark Proksch), now an unholy infant who crawled out of the energy vampire’s own corpse. In the intervening year between seasons 3 and 4, Laszlo has let the vampire’s mansion completely fall apart, to an absurd degree, and the show’s first episode back, “Reunited,” makes much of the house’s now-flooded basement, exposed pipes, rotting floors and fully Grey Gardens-esque interiors, as well as several raccoons getting familiar with the property.

But for as hilariously hyperbolic as the damages to the vampires’ residence are, the actual work of transforming the show’s main standing sets into one large disaster zone was no laughing matter. Production designer Shayne Fox and her team didn’t have the space, time, or budget to build a completely new house they could then wreck. “It’s an iconic part of this series, that set. We can’t just go and forever damage it and have it be beyond repair,” Fox told IndieWire.

So Fox needed to find ways to add layers of damage onto the existing bones of the set, ones that could read visually even against the show’s baseline of dark, dingy, slightly cobwebbed interiors. “I came up with a mood board of different destruction techniques,” Fox said. “We kind of had a palette of degradation. So [we settled on changing] the walls, the layers of wallpaper, [and] we added what looked like fire damage in some areas and there was some areas where there’s just, like, some ambiguous green slime stains on the walls.” The mansion in its prime and then in the Season 4 premiere, “Reunited”

The main visual flare that read immediately upon entering the mansion came from the show’s greens team. While every room in the mansion appears to have started re-wilding just a little bit, Fox and her team found ways to have damage speak to the characters’ response (or, more accurately, non-response). The “fancy room” in the house now has a tree trunk fully fallen into it, which, even with superhuman strength, Laszlo hasn’t managed to remove. In other places, Laszlo’s home improvement efforts are as violent and aborted as his passing interest, with chunks missing from only partially gutted walls. “We had to figure out how to create a new wall, to cut it, to add the layers of the brick and the insulation and the wiring and the plumbing, so that it’s all kind of coming out. So the texture is just phenomenal,” Fox said.

That texture is what helps the damage read visually, even in the dim half-light of the house’s interiors (it’s a minor miracle the electricity and gas hasn’t been cut off). Fox and her team used the opportunity of bringing in water, mold, and set damage to spike the traditionally dark mansion with a bit of color, which, along with the textural changes and more dynamic (well, dripping) environment, give the mansion a bit of an eldritch sheen. “It’s funnier too, to have all these dangers, you know, like leaking things and exposed pipes [while Laszlo is] supposed to be taking care of a child. So it just even further highlights how far from our reality Laszlo’s reality is,” Fox said. 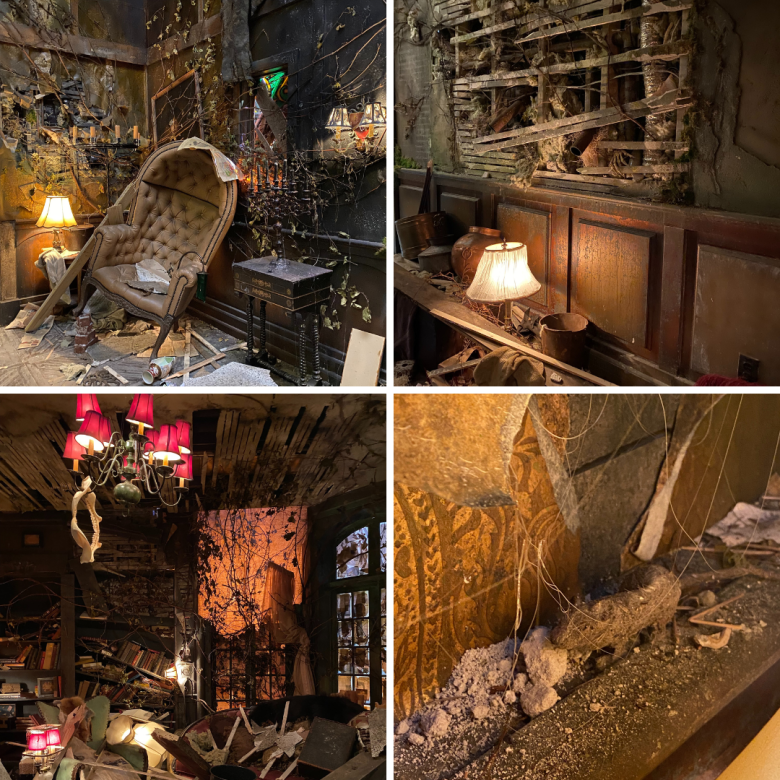 Writer Paul Simms agreed. “It’s hard with an old, decrepit vampire mansion to make it even more decrepit, but [Fox] came up with some great things — just like boards ripped off the walls and the ceiling caving in and a tree having fallen through the house. And water, always water dripping everywhere… [the house] feels like a particularly dangerous place to have a five-year-old-child Colin running around in.” Simms also said that a bit of inspiration for the house’s fallen state came from the run-down, dangerous house in “Fight Club.” The contrast between that and the show’s new “Babysitters Club” plot surrounding the young Colin creates the kind of delicious visual disconnect that “What We Do In The Shadows” excels at.

While the vampires’ basement is off-limits for fighting (even if sex is always in the cards for Nadja and Laszlo no matter the location), Fox and other department heads used the changes to the set to come up with interesting work-arounds in the places the set was no longer as contained. “When you’re in a studio and you’ve got a big hole, what’s on the other side? We ended up using canvas tarps, which end up really being very nice for light diffusion,” Fox said. “Those are the kind of things that you realize, oh, the canvas is actually really nice for light diffusion and oh, now we’ve got a hard ceiling we have to have a little bit more candlelight over here, you know, just to capture everything and make sure it’s lit enough for the actors to show up.” 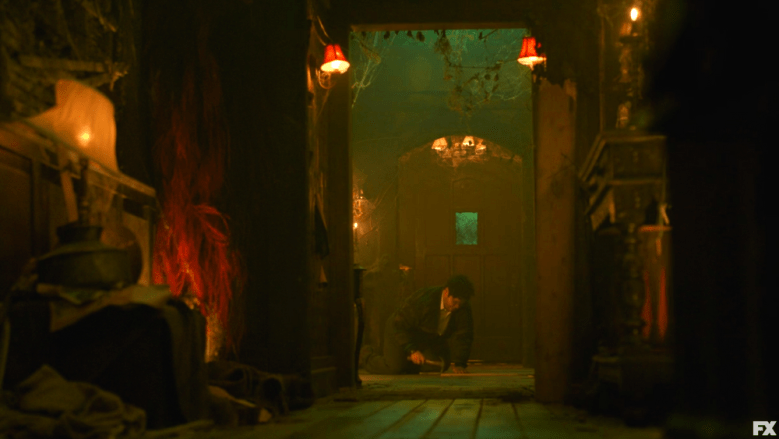 “What We Do in the Shadows”

The meticulousness need to create layers of brick, plumbing, plaster and lath, multiple layers of wallpaper, insulation, and then cobwebs and vines was important, but Fox was proud of how collaborative an effort the set changes were.  “Everybody who touched it was just so talented,” Fox said. “[The set decoration team] was planting little fake rats that look really real, like just sitting on a ledge, and joints like half poked outta the wall. There are a lot of like private jokes and random, odd things that you would only see if you were actually standing in the studio. We really got into it and had fun with it.”