Good Morning Britain viewers saw Piers Morgan hooked up to a Tens machine this morning, to experience what childbirth feels like for a woman.

The gadget which was operated by Stefan, a scientist from the Netherlands, had attached four sticky pads to Piers’ stomach which were connected to the machine.

Piers’ co-star Susanna Reid introduced the experiment and said: “You send electrical impulses to those patches. Around the 50-60 mark is similar to the beginning of childbirth, or the first contractions.”

And Piers was keen to show his bravado and boosted: “How hard can it be guys? I think I’m about to find out?”

It wasn’t long before those watching at home saw him make a series of painful faces, gritting his teeth and having to stand up in order to deal with the pain.

Until the monitor reached 60 and he backed out, screaming in agony.

The electrical impulses started at 20 and Susanna commented: “This is what it’s like when you first go into labour, and you have to stay at home during this period.”

Encouraging Stefan to turn it up, Piers began wincing as the notch turned to 35.

As it got to 40, the presenter let out an almighty scream and Susanna asked: “Is it unbearable yet?”

“Easy, easy,” Piers replied and Susanna continued: “This is just a contraction.” And he joked: “I’ve got to dig deep and man up!” 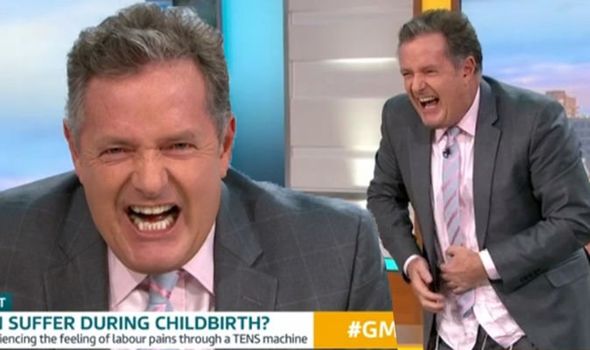 Still shouting, he commented: “That’s not even 60!” And Susanna interjected: “Are you going to surrender? Are you giving in?”

But Piers did not want to be defeated and looked straight down he camera and said: “Do. Not. Give. In.”

As the dial turned to 60, Piers had had enough and stood up pulling the sticky pads of his stomach: “That’s enough!”

“How many minutes of contraction did he go through before he stopped?” Susanna enquired.

And Piers was eager to tell everyone his thoughts: “That cannot be like childbirth. I can’t believe that.”

Kate Garraway, who was absent from the desk when the experiment was going on, walked out from the back of the set and explained to Piers how “65 is the early level of contractions before a woman is given gas and air.”

And Piers said: “On balance, to the women of Great Britain, I probably owe you a slight apology.

“I am very glad that we [men] don’t have to go through this and I’ve got to say that was agony. If that’s what you honestly go through, my respect for women during child brith has gone through the roof.”

Good Morning Britain airs weekday mornings at 6am on ITV.