Next week John Wayne’s Baby Face flick airs on The Classic Movie channel, on September 12 from 2pm. The 1933 drama, which starred Wayne alongside the likes of Barbara Stanwyck and Donald Cook, followed the tale of a strumpet who uses men as stepping stones to success, as she attempts to lay bare a “rags-to-riches” formula. At the time of its release, reviews were critical of the flick, but modern reviews of the pre-World War Two film have been kinder.

Among those praising Baby Face was Ty Burr, of the Boston Globe, who hailed it a “fascinatingly conflicted artefact of Depression-era do-me feminism. Lily Powers is one of the screen’s great hard girls, and Baby Face can’t decide whether to celebrate her or string her along”.

Fellow critic, Mick La Salle, wrote in the San Francisco Chronicle: “The differences between the original and the release versions of Baby Face are small, and yet combined they spell the difference between a good three-star movie and a delightful four-star movie.”

Wayne has remained one of Hollywood’s most enduring stars, with his more than 170 films and TV back catalogue regularly enjoyed by viewers across the globe.

While the star sadly passed away in 1979 aged 72, tales of Wayne’s life and relationships have continued to be pored over by historians and film aficionados. 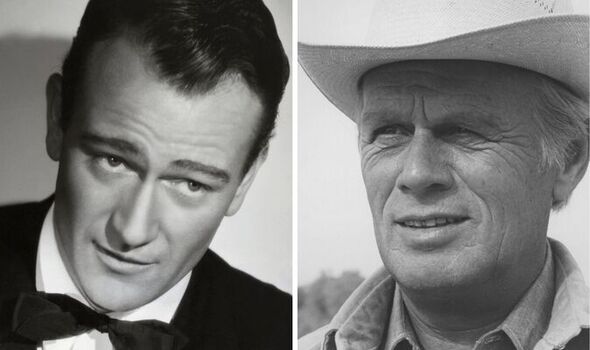 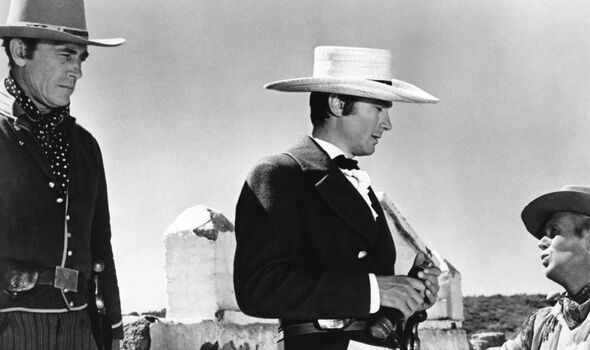 This included a time when Wayne lashed out at a co-star while filming the 1960 western The Alamo.

The Alamo was directed, produced and starred in by Wayne, with Richard Widmark also taking a leading role in the flick, and their relationship was discussed in Pilar Wayne and Alex Thorleifson’s 1987 book John Wayne: My Life With the Duke.

Pilar noted how Wayne found Widmark “a difficult man” who had a “scratchy” personality.

She explained that during filming Widmark would challenge every decision Wayne would make, while shooting continued in Brackettville, Texas. 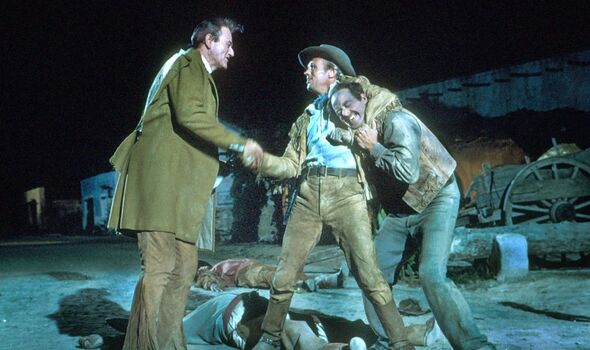 During his long career, Wayne had routinely dealt with stars that he didn’t get along with, and understood different ways to approach those relationships as a director.

But, Pilar explained, with Widmark, Wayne was unhappy with how their understanding was developing.

She said: “Duke tried patience and understanding first because he respected Widmark’s talent. But Widmark seemed to interpret Duke’s patience as a sign of weakness. He kept on arguing with Duke in front of the rest of the cast and crew.”

However, as time went by Wayne’s patience with Widmark, who died in 2008, grew worse with the director’s understanding seen as a “sign of weakness” by his unruly actor. 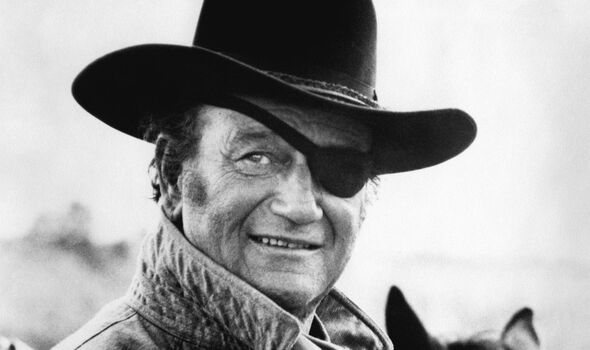 Pilar added: “He kept on arguing with Duke in front of the rest of the cast and crew.

“Predictably, the day came when Duke’s patience ran out… Widmark and Duke had a violent confrontation and Duke threw the smaller man against a wall.”

Widmark wasn’t the only star Wayne would seemingly fall out with, as his daughter Aissa outlined in her 1991 book John Wayne: My Father.

She noted how Wayne would speak with “real venom” about the double Oscar winner Gene Hackman, and that every time he appeared on screen the western star would “skewer his performance”.

She added: “I wish I could tell you why he so harshly criticised Hackman, but he never went into detail.

“Although it’s pure speculation, had my father lived to see more of his work, I think his view of Mr Hackman would have changed.

“Back then, however, my father called Hackman ‘the worst actor in town. He’s awful’.”

Baby Face airs on The Classic Movie channel from 2pm on Monday, September 12.