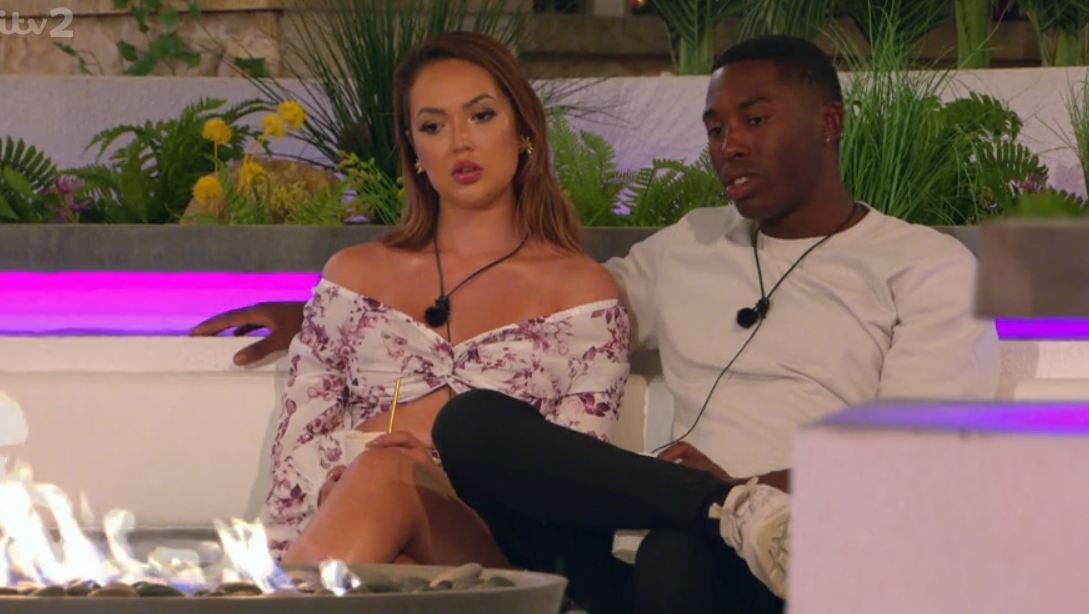 It’s all over between Aaron Francis and Sharon Gaffka on Love Island as he decided to pie her off following her row with Hugo Hammond.

Sharon and Hugo fell out in last night’s episode as she believed he was making a dig at her and calling her ‘fake’ for having cosmetic surgery.

They have since patched things up, but Aaron claimed that she was too ‘fiery’ for him and the argument had put him off, insisting it had nothing to do with his head being well and truly turned by new girl Lucinda Strafford.

In Wednesday’s episode he took Sharon for a chat to tell her how he felt.

‘After yesterday I didn’t really like the way you reacted to everything. I understand that you got upset. Personally people that I date usually handle things a lot different,’ he said.

She replied: ‘From my perspective you weren’t in the conversation, I wasn’t yelling.’

Aaron said: #I do prefer someone a lot more chilled. We get on really well but I feel like there were a few red flags.

‘Can I see this working long term? I’m not sure.’

Asked straight out if he wanted to end things, he added: ‘I don’t wanna continue it.

‘I gotta think about the kid situation. I love kids and I wanna start a family.’

Sharon said: ‘If that’s what you want I can’t change your mind about that.

‘I think it’s unfair to say staright away that it’s done as opposed to having a conversation about things.’

Aaron’s mind was made up however, as he told her: ‘I don’t feel like we would be strong outside. I just thought I’d much rather do what I wanna do and give you the opportunity to meet someone properly.’

As far as he was concerned that someone is Lucinda, who he enjoyed a date with in the episode.

Speaking to Hugo the following day, he was clearly blown away by her looks with the pair calling her and fellow newbie Millie ‘sublime’ and ‘from the gods’.

The teaser for Thursday’s episode hinted that there was more drama in store for Sharon as a brief scene showed her in tears. What has made her so upset?