Love it or hate it, “Moon Knight” at least pushes Marvel’s Disney+ programming into ambitious psychological territory. The mind-bending story of Oscar Isaac battling Oscar Isaac — in the dueling roles of hardened mercenary Marc Spector/Moon Knight and sensitive museum gift shop worker Steven Grant/Mr. Knight — is a confounding rabbit hole of childhood trauma, dissociative identity disorder (DID), and Egyptian mythology. By comparison, “WandaVision” and “Loki” seem like a walk in the park.

But when it came to visualizing “Moon Knight” through the costume design of Meghan Kasperlik (“Mare of Easttown,” “Watchmen”) and the cinematography of Gregory Middleton (“Game of Thrones”) and Andrew Droz Palermo (“The Green Knight”), the great challenge and opportunity was to convey DID through two distinct POVs. It was almost like making two shows: horror meets superhero. Isaac, who also serves as an executive producer, was a key collaborator.

“I worked closely with Oscar on both [Marc and Steven],” Kasperlik told IndieWire. “We started with Steven because I thought Marc would be a little easier to find. Steven lives in Brixton so we wanted to show that he lives in this cool part of London but he’s not necessarily the cool kid there. It was more about finding some vintage shirts that Oscar really responded to. We bagged up the trousers, I put a heavier shoe on there and then he asked for a white sock. Then [we] made it a light gray as an homage to Moon Knight and not another iconic character wearing a white sock.

“As soon as Oscar put the costume on and he slouched his posture,” Kasperlik said, “Steven started to form. And then with Marc, I spoke with Oscar about a friend of his in special opps and he really helped me to show how you’re trying to blend in with tan and navy and gray. But I had the light gray hoodie as an homage to the Moon Knight costume.”

When it came to designing the Moon Knight and Mr. Knight costumes, Kasperlik gave each of character their own cool looks while wrapping both of them around the symbolism of the Egyptian moon god Khonshu, who possesses Marc. The Moon Knight costume is composed of a Eurojersey that’s been dyed and 3D printed, and then layered with 803 individual pieces, including mummy bandage wrapping. “There’s a foil on it so that when the light hits it, there’s a little shimmer of gold,” she said. “And more 3D printing went on top of that. On the costume, the crest is Khonshu and then hieroglyph within the crescent. The hieroglyph in the pants says: ‘Rise and live again as my fist of vengeance. My Moon Knight.’”

The Mr. Knight costume is a white three-piece suit made of upholstery fabric because of the abundance of material required; it also has a shimmer, courtesy of embedded silver lame. “The lapels are custom done with a Khonshu symbol along with the tie, and the buttons on the waistcoat are Khonshu’s symbol, so I had a metalsmith make all of the buttons,” said Kasperlik.

The cinematography of “Moon Knight,” which was split between Middleton (Episodes 1, 3, 5, and 6, the last of which streams May 4) and Palermo (Episodes 2 and 4), followed the twisted journey of Marc and Steven. “The reason I got excited when the show came up was that it’s driven by a character reconciling with different parts of himself, and that drives the plot,” Middleton said. “That’s not normally what you see in a superhero drama. Then we can make the point of view from each of these characters, especially Steven in the beginning. It’s a horror movie for him. He’s being haunted, he doesn’t know what’s going on. And Marc is watching his life unravel.”

Both cinematographers shot with the large-format Ari Mini LF with Zeiss Supreme Prime lenses, and utilized Techno cranes and Techno dollies for repeated moves. In working with director Mohamed Diab, Middleton enjoyed shooting on location in Budapest, Jordan, and Slovenia, but also setting the tone with lots of darkness to enhance the sense of mystery and horror. “Mohamed is a director that likes to shoot in as many real locations as possible and let the space inform,” Middleton said. “But the big thing was that it should be from Steven’s point of view — and we want to be as confused as he is.”

Palermo, who worked with directors Justin Benson and Aaron Moorhead, had to get his head around shooting a complicated fight scene in which Steven and Marc alternately take on a monstrous jackal in Episode 2. “Making a nighttime fight on a London street look cool was a hard technical challenge because they’re fighting that invisible force,” he said. “But I brought in sodium vapor color to make it look grungier.” 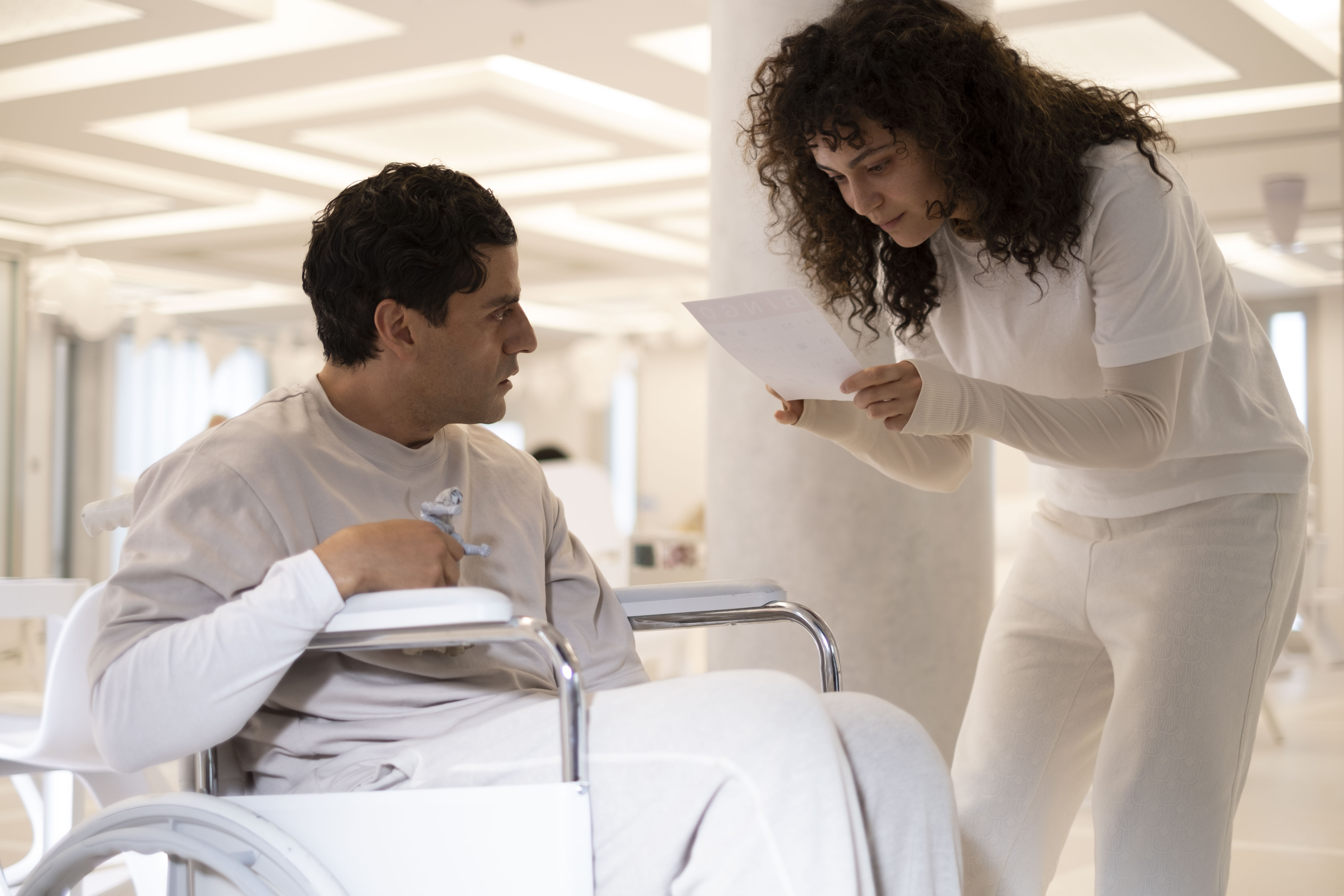 The fighting styles of Mr. Knight and Moon Knight were very different, with the former being a street brawler and the latter being a more traditional superhero. “When Mr. Knight finally lands that punch, we talked about it as his George McFly moment,” Palermo said, referring to the “Back to the Future” character altering his fate by socking his high-school bully. “But he needs to have the rug pulled out from under him.”

However, shooting the much talked about white psych ward sequence at the end of Episode 4, in which Marc and Steven begin to confront their dark past, was the highlight of Palermo’s work. He immediately establishes a sense of surreal disorientation with the roving subjective camera. “I’m so happy they let it unfold slowly and resolve itself the way it did,” he said. “We played with the color and the contrast and we wanted some nuance to make it visually interesting. We didn’t want it to feel unhealthy but we also didn’t want it to feel completely real.”

For Kasperlik, it was important to differentiate the wardrobes for Marc; Steven; Marc’s wife, Layla (May Calamawy); and the cult leader-turned-psychiatrist Harrow (Ethan Hawke) in this sequence. But at the same time, she needed to add tiny clues that would eventually pay off in the Episode 6 finale: “For Steven, he’s wearing the pajama he wore in earlier episodes, Marc’s costume is similar to the color of the mummy wrappings of the Moon Knight costume, and Layla has a couple Easter eggs you will catch if you look closely on repeated viewings.”