Who doesn’t love a good reality TV romance? All of the “Below Deck” casts have given us a ton of relationship drama, and that’s part of the reason why they resonate so well with viewers — because most of us have been in similar situations before, though it didn’t involve a camera following us around! Whether it be the romance between Tom Checketts and Malia White on “Below Deck Med” (the two broke up after a cheating scandal, per The Daily Dish), or the love triangle between Gary King, Alli Dore, and Sydney Zaruba, on “Below Deck Sailing Yacht,” there has been plenty of love and drama to go around and we’re here for it.

It’s also worth mentioning that there’s now a “Below Deck” baby, thanks to Jean-Luc Cerza-Lanaux’s relationship with Dani Soares. And luckily for fans, Dani has shared a few photos of the adorable baby girl on social media. “Happy 1 month birthday,” she wrote on Instagram. “Yes, I know the bow is almost bigger than her head… and she got baby acne, poor thing.” Cue heart explosions.

On Season 6 of “Below Deck Med,” one of our favorite deckhands, Mzi ‘Zee’ Dempers, opened up about his relationship with someone who was on “Below Deck Sailing Yacht,” and our reality TV hearts just can’t take those two worlds colliding. If you thought some of the past relationships were fascinating, this goes along with the same theme. Keep scrolling to find out more deets.

Inside Mzi 'Zee' Dempers "Below Deck" past with Georgia Grobler 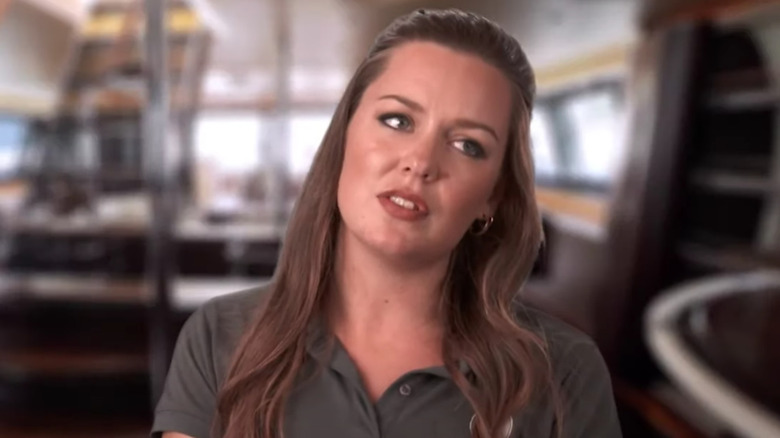 Mzi ‘Zee’ Dempers opened up about his love life, and we’re loving it. The reality star shared to Cheat Sheet that he had a fling with Georgia Grobler, who appeared on Season 1 of “Below Deck Sailing Yacht.” “She was a formal date of mine,” Zee shared of their meeting, which was surprisingly not onboard a vessel. “It’s just something that we do back here in South Africa. It’s like you live with a whole bunch of people and then have a big dinner. And then your friends invite your date for you.”

Zee also noted that the two of them didn’t date but they still had some fun together, nonetheless. “I wouldn’t say it was necessarily dating, but it was like hooking up every now and then over some time,” he revealed. Sadly, Zee also revealed that the two didn’t speak a lot before the show, but their appearances on Bravo brought them back together. “Obviously, trying to keep everything under the wraps. But then we reconnected afterward and sort of spoke about the experience afterward.”

Zee appears to have found love again in a teaser trailer for the series, where he was seen kissing stew Courtney Veale. While we’re dying to know more details, he’s not one to kiss and tell. “I can’t give spoilers,” he told the outlet. “I think that all unfolds on the show.” And now we’re on the edge of our seats.