What’s Thanksgiving without an awkward and tense family dinner? Monday’s Ordinary Joe fall finale delivers on that front with more than one fraught meal.

Let’s break down the Turkey Day surprises, timeline by timeline, starting with the one that has the biggest reveal:

MUSIC JOE UNIVERSE | Following Amy’s confession that she slept with Bobby, Joe has thrown himself into wallowing and sad songs. Amy knows there’s no excuse for what she did and insists that it was a one-time mistake. Amy tells her husband that she loves him, not Bobby. When Joe’s sister Celeste shows up for Thanksgiving — yes, they’re still hosting a get-together, because why cancel when you can have an uncomfortable gathering? — she asks Joe if he can forgive Amy. His silence and heavy sigh say it all.

“How long has it been since you two had sex?” Celeste asks. More silence. “That long?”

As far as Celeste sees it, Joe has two options: end things with Amy, or find some way to move past it. 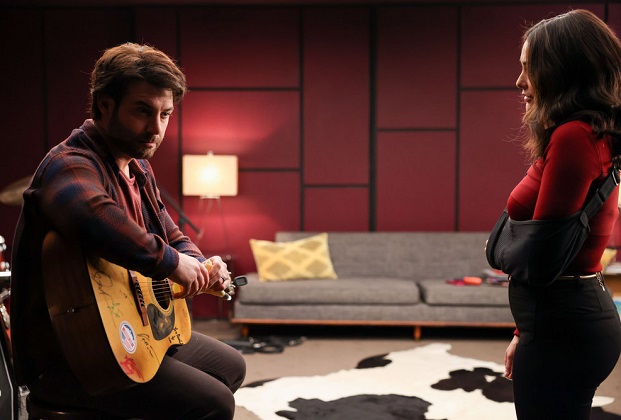 Meanwhile, Amy discovers that Bobby’s widow isn’t just going to serve out the rest of his term; she’s going to run for his seat, pitting her directly against Amy. After dinner, everyone heads to a donor event, where Joe is supposed to perform. Amy introduces him with a heartfelt speech about how when she first heard the song he’s singing on the radio, she realized she was falling in love with him. The combination of Amy’s words and her betrayal get to Joe, who begins crying mid-song, his voice cracking over the lyrics. Frank escorts him off the stage as Amy tries to keep her composure in front of all the party guests.

“Are we broken?” Amy asks back at home, to which Joe replies, “I don’t know. Maybe we are.” Then Amy gets a call from her doctor: she’s pregnant! And given Joe’s comment earlier that it’s been a while since he and Amy had sex, the baby most definitely has to be Bobby’s, right?

Elsewhere, Eric’s boyfriend tells him that he’s HIV positive and wanted to be open with him about it. Eric says he doesn’t have to explain anything and that he’s proud of him. 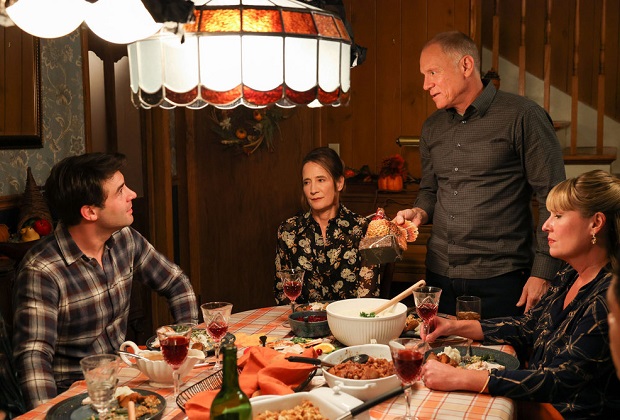 COP JOE UNIVERSE | Since Amy is staying with Joe, she gets enlisted into helping his mom out with Thanksgiving. The food prep goes well, but when the family sits down to eat, things start to get ugly, with Frank making snide remarks about how Joe stood by “Lady Liberty” Amy, but not by him. Joe tells Frank that he did what his dad would have done, and Celeste starts laughing. She thinks they all deify dad and never talk about how angry he would get. Heck, they never talk about anything, she argues, like how Joe is a cop and still living at home with his mommy. There’s yelling, tears are shed, people storm off. (Before this meltdown, Eric and his wife ask Joe to be their baby’s godfather, so at least something nice happened.)

In the car, Joe apologizes to Amy for his family. Then he gets a call from one of the residents he handed out his card to on his new beat. There’s a fire at the man’s building, and his son is still inside. “I don’t want to leave anything left unsaid. I love you,” he tells Amy before running into the burning building. 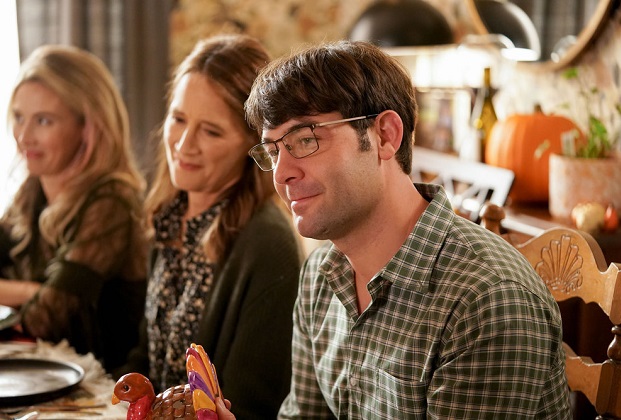 NURSE JOE UNIVERSE | With Jenny stuck in Atlanta for the holiday, working on a pro bono case for her professor, Joe sets out to find an aide to assist with Christopher’s care. He decides to hire nursing student Kinsley, and she’s so cute and clever, and Christopher loves her, so I have a very had feeling about this. Meanwhile, Jenny’s colleague Barrett has come to Atlanta to help out with the case, and I have an equally bad feeling about that situation. Enjoy this timeline’s relatively peaceful Thanksgiving dinner, Kimbreau clan, because it sure seems like some interlopers might be causing trouble soon for Joe and Jenny’s marriage.

Ordinary Joe fans, what did you think of the episode? Grade it below, then hit the comments!