Berlin 2021: There’s a haunting, novella-like quality to the director’s follow-up to “Portrait of a Lady on Fire” 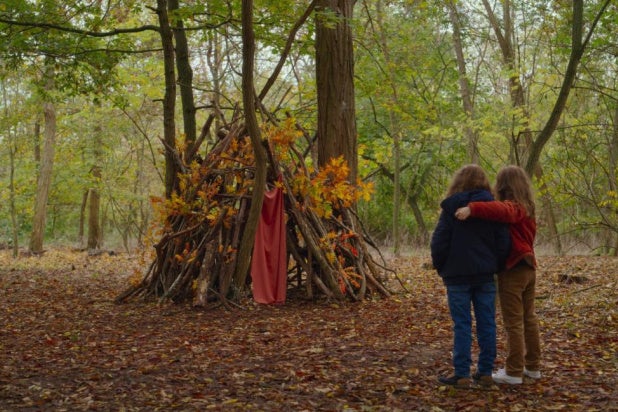 Anyone expecting another sweeping and passionate period piece from the director of “Portrait of a Lady on Fire” should begin recalibrating their expectations for Céline Sciamma’s follow-up, “Petite Maman.”

Intimately focused on a handful of characters, with a single fantastical event setting up its direct narrative through-line, this feature plays like a novella, or a short film, or both — it’s the kind of piece that was once the bread-and-butter of PBS’ “American Playhouse” anthology series. And while “Petite Maman” is a vastly different from than “Portrait,” it furthers writer-director Sciamma’s reputation as a storyteller with a keen understanding of character and human emotion.

The film opens with young Nelly (Joséphine Sanz) bidding farewell to the residents of a nursing home where her namesake grandmother has just died. This passing is devastating for Nelly’s mother, Marion (Nina Meurisse), a woman given to moments of melancholy even under normal circumstances. Nelly and Marion go to clean out the old woman’s house, where Marion talks about details of growing up, including the tree fort she built out of branches in the nearby woods.

Overcome by grief, Marion returns to the city, leaving Nelly and Nelly’s father (Stéphane Varupenne, “Godard Mon Amour”) to finish with the house. Nelly goes to play in the woods, where she encounters a young girl (Gabrielle Sanz, Joséphine’s real-life sister), who is building a tree fort out of branches. Her name is Marion.

Sciamma is not out to make “Back to the Future Part II” here, as you might imagine; this isn’t a time-travel movie that’s about the rules, or altering the past or the future, or telling someone something they shouldn’t know. Instead, Nelly follows Marion home where she gets to see her grandmother (Margot Abascal) at a younger age, and perhaps have the opportunity to say the farewell of which she was recently deprived.

Getting to know Marion as a child gives Nelly insight into who her mother was and is, and seeing Marion and grand-mère Nelly together also offers insight into generational ties and the bonds (and the silences) between mothers and daughters. That’s a lot to ask a child actor to convey, but under Sciamma’s guidance, Joséphine Sanz gives a beautifully intuitive performance. It’s not “mature” in the way that we think of some children on screen, where a kid actor already has the poise and presence of a fully-actualized adult: Sanz is believable as a young girl who is being given a glimpse of family history, and Sciamma presents this revelation as completely believable for someone of that age.

Joséphine’s performance is matched by her sister Gabrielle, who is every bit the child that Nelly is while also showing hints of the adult Marion’s inner darkness and gravity. Young Marion immediately accepts Nelly’s revelation that she is her daughter, and the two are able to communicate with each other both as playmates and as relatives with a fascinating secret.

Production designer Lionel Brison (“Portrait of a Lady on Fire”) subtly but effectively conveys the same house in two different time periods — it’s not unlike the sleight-of-hand by which the lead character’s apartment in “The Father” keeps changing — and Sciamma herself, credited as costume designer, creates believable but distinct looks for the young heroines, with a hoodie for Marion that recalls Red Riding Hood and a sweater-and-overalls combo that delineates Nelly as being ready for adventure.

“Petite Maman” runs just 72 minutes, and like Steve McQueen’s recent “Small Axe” films, it’s a reminder that, especially in a post-theatrical paradigm, movies should be allowed to be as short or as long as the filmmaker needs them to be without feeling forced to fit into a predetermined slot. Even at that length, it’s particularly resonant, packed with emotion and insight that will move the director’s admirers (who should consider watching it alongside their own children) and probably garner her some new ones.

“Petite Maman” has been acquired by NEON.