Piers Morgan was back presenting Good Morning Britain alongside Susanna Reid this morning and a topic up for debate was whether or not childhood cartoon Fireman Sam should change it’s name to Firefighter Sam to fall into line with modern society, but Piers just saw it as politically-correctness gone mad.

Naturally, this conversation riled up Piers and those watching at home saw the journalist go on an epic rant at Les Britzman, the Chief Fire Office for Lincolnshire Fire and Rescue Service who has stopped using the cartoon brand because it was not “inclusive” enough.

Les, who was on a live telephone link, stated the cartoon programme “Fireman Sam and the character is outdated” and it was the use of the word “man” which was the problem.

“There you are representing the [fire] service and you have a problem with using any promotional material that has a male firefighter at the head. It’s totally hypocritical,” the presenter slammed.

“Yes I am a white man, and across the fire and rescue there are 95 per cent of white male [firefighters] and this doesn’t reflect society, half our population is female,” Les argued.

The presenter then stated how the cartoon had a female firefighter called Penelope, as well as black and disabled characters.

“It couldn’t have a more [diverse] collection of people!” Piers stated. “[The show has been] bullied into doing everything he could possibly want and now you want to get rid of Fireman Sam!

“Why can’t fire services use the Fireman Sam brand? Why can’t you celebrate men and women? Why does everything have to be gender fluid?”

Les then explained his reason for veering away from the brand and said: “Lincolnshire is a modern brigade. We’re struggling to recruit firefighters. 50 per cent of the population are women and [the brand] it’s simply not appealing. 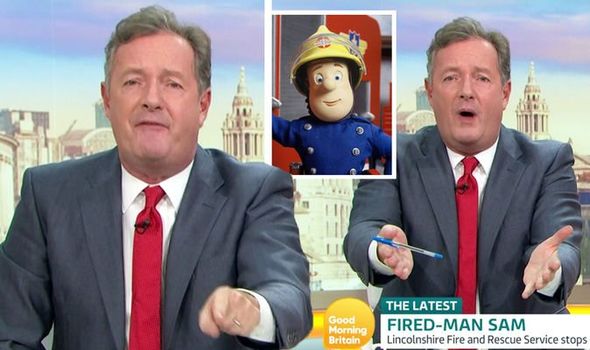 “The image portrayed to young girls, who are three, four or five years old, if we are sending the wrong message at that age, were making a problem in terms of recruitment [later on],” he added.

“No woman has ever refused to join the fire service because of Fireman Sam.”

Attempting to get a word in, Les said: “Many women don’t want to be firefighters because of images like Fireman Sam.”

But Piers cut him off and added: “Name on! You can’t because there aren’t any! You throw this tripe nonsense that women have watched Fireman Sam and put them off! Penelope is heroic in Fireman Sam!” 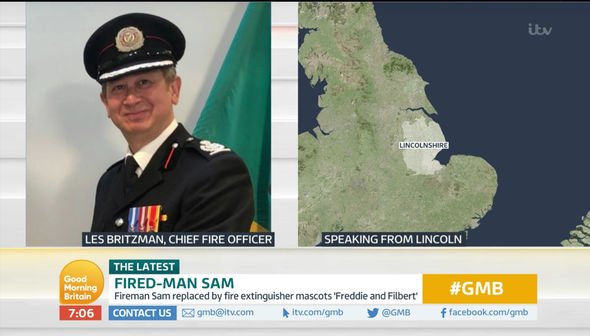 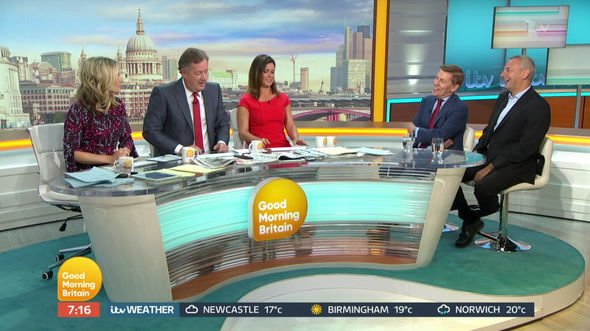 Les explained why he felt it was necessary to change the title of the cartoon to Firefighter Sam because it would help “expand the workforce”.

“Why do you have to have a 50/50 split, more men want to be Firefighters than men,” Piers hit back.

Attempting to reduce the noise, Susanna interjected and said: “Piers Morgan is going to self combust! Poor Les, he’s just trying to change the world and save lives!”

Taking over, Piers ranted to the viewers: “I love firefighters, I don’t see what’s wrong with being a fire woman, what’s offensive!”

“You are offended by anything!” Susanna snapped at his co-star.

“But why is Fireman Sam being wrongly vilified?” Piers continued. “Amid all the joking, it’s a really serious thing turning this country into being PC-crazed.” 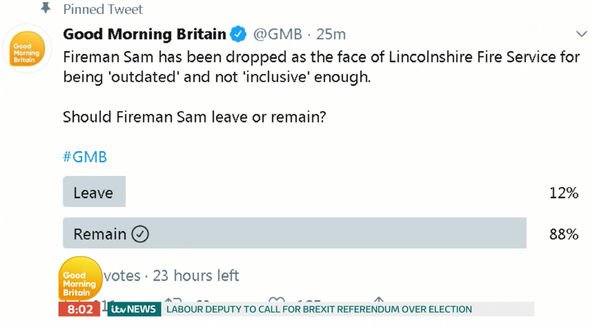 Following a short break, the show returned and Piers was adamant to find out what the ITV viewers thought on the matter and decided to create a poll asking ‘should Fireman Sam leave or remain?’

Taking to Twitter to vote and comment, one said: “@GMB Keep battling for common sense please @piersmorgan. I feel we are heading for a serious societal breakdown.”

“@GMB It’s a cartoon for god sake, leave it be. Create a new cartoon called Fireman Sally if it bothers them so much,” another added.

Someone else wrote: “@GMB Wtf is “inclusive”? The cartoon has female fireighters, there’s a kid in a wheelchair and a black family. Oh and Norman price is ginger. Pretty diverse mix.”

“@GMB The world has become too politically correct! Can’t do this, can’t do that! Seriously,” one person suggested.

Good Morning Britain airs weekday mornings at 6am on ITV.