Camille Grammer from The Real Housewives of Beverly Hills is on fire, holding back nothing when it comes to dishing about the cast. She recently shared that Kyle Richards was the cast member who started the idea of saying “Bravo” or “Andy” in order to get producers to stop filming. 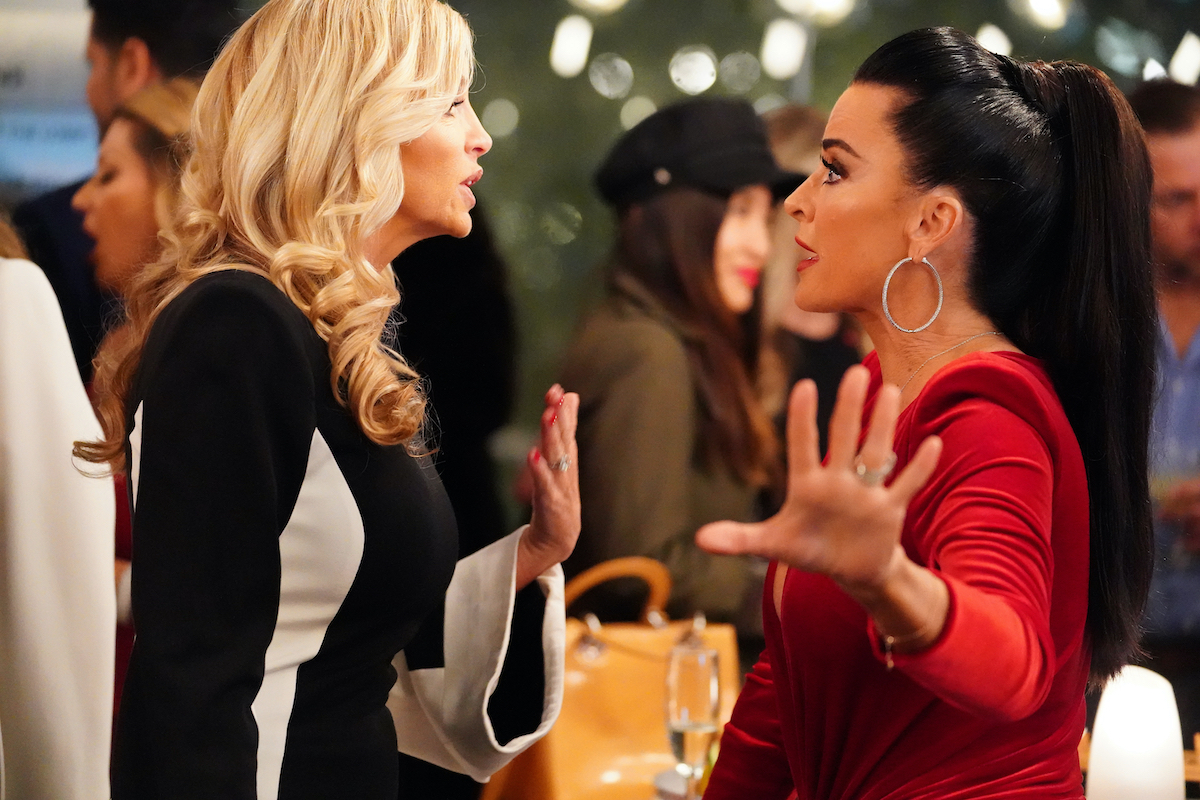 “I have witnessed other housewives say ‘Andy’ Or ‘Bravo’ when they don’t want something aired,” she dished on Twitter. Adding, “I don’t know. The first time I heard it was out of KR’s mouth. She played that card often.”

A viewer asked if she would say “Bravo” just to fix her makeup, but Grammer said no. “It happens more often then you think,” Grammer added on the thread. “She would throw a hissy fit and walk off.”

When a viewer asserted that Denise Richards was difficult to work with, Grammer tweeted that she disagreed. “Denise knew she had a target on her back. Vile [Kyle] is lying,” she shared in the same Twitter thread. “This is clearly a CYA move by production to deflect from the ladies bullying Denise most of the season and the reunion.”

Grammer then added that she thought Richards was blindsided. Kyle Richards jumped in on the thread and added a giphy of Bethenny Frankel yelling, “Go to sleep!” Richards also noted that Grammer referred to her as vile. “Haha. Calling someone vile is so nice,” Richards tweeted.

Another viewer accused Kyle Richards of being a “behind the scenes” producer. “I don’t make those decisions but she has burned every bridge so…,” Richards tweeted about Grammer. Richards even called Grammer out for getting involved at all. “Camille why are you so angry? You weren’t even involved with this,” she tweeted.

Was Denise Richards a scapegoat this season?

Denise Richards was seen saying, “Bravo, Bravo, Bravo” this season, referring to the move some of the women made to have portions of a scene cut. She was dogged continuously about an alleged romantic affair Brandi Glanville claimed they had. The season ended with no actual answers or closure and some people believe Glanville may have fabricated the storyline as leverage to return to the show.

“I mean, listen, Brandi has not been on the show for years, right?” Luann de Lesseps from The Real Housewives of New York City told Heather McDonald on her Juicy Scoop podcast.

“I mean, and what a comeback,” she said. “Let’s talk about that. I guess that, obviously, Brandi needs a hook. This is a great hook to get back into the Housewives at Denise’s expenses.”

Also, Patti Stanger, Bravo’s Millionaire Matchmaker doesn’t think the romance even happened.  “I can’t imagine her with Brandi,” Stanger said on the Behind the Velvet Rope with David Yontef podcast. “I just don’t get it. Like everyone called me. ‘Like what do you think? What do you think? What do you think?’ And I’m like, is this real or is this a publicity stunt on Brandi’s part to get back on the show? Like, I don’t know. I said the only way I can see it is if the three of them had a thing and it was onetime when she makes it more than it is.”