Sally Wainwright throws the conventions of period drama on its head

When you hear Anne Lister’s story, you can only wonder why you haven’t heard it before. Lister became the mistress of Shibden Hall, a country estate near Halifax in Yorkshire, in 1826. She was prodigiously self-educated, a tough business woman who made the estate pay by exploiting coal reserves and quarrying stone, and a fearless traveller who was eventually to die of a tick bite on the Georgian steppes.

All this is documented in her diaries, which were marvellously vivid and much more extensive than those of Samuel Pepys: five million words, about a sixth in a code of Lister’s own devising, have survived. Possibly it is that very vividness that has kept her in decent obscurity, however, since she wrote in great detail about her many love affairs with other women, including the woman she called her wife: Ann Walker, the sheltered heiress who, despite her own conservatism and persistent anxiety, found Lister so irresistible that she defied convention to set up house with her.

It is typical Yorkshire weather – simultaneous rain, sun and a tearing wind – when I visit Shibden Hall during the filming of Gentleman Jack, a new television drama about Lister written and directed by Sally Wainwright. Wainwright’s credits include Happy Valley, Last Tango in Halifax and Scott and Bailey; her name is not usually associated with period drama. Shibden Hall, however, was “part of my personal culture”, she says. She grew up in Halifax. As a child she used to be brought to the grounds for a day in the fresh air. The museum guides were very vague when talking about Anne Lister, which suggested there was a secret lurking in there somewhere. “I became aware of this woman who was transgressing, but I didn’t know how.” 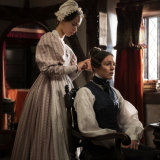 When she eventually read an account of Lister’s life, she immediately wanted to write about her too. Her appetite for life was inspiring, her eccentricities – such as the skirted adaptations of men’s suits she wore, always in black as a permanent lamentation for one of the women who got away – rich material for a dramatist. That was 20 years ago; somewhat incredibly, it took that long to sell the idea. Not that Wainwright sees that as a negative now. “I’ve wanted to write about her for so long I feel everything I’ve done has been a rehearsal for this.”

Shibden Hall was donated to the council in the 1930s after the last Lister to live there– a Cambridge scholar who, years before, was the first to decode some of his forebear’s writings after he found volumes of the diary hidden in the woodwork – went bankrupt. It was not a grand estate at the point where Lister took it over, but she had ideas of tremendous grandeur. Angela Clare, the collections manager for the county museums, points out the gatehouse, the grand staircase, the new wing and the towers at either end of the original house she had built – using Ann Walker’s money – in an effort to make it seem more of a manor. She even dug an artificial lake.

Wainwright picks up her story in 1832, when Lister was 41. She came home from Paris, licking her wounds after splitting up with a lover who decided to marry a man, looking for distraction in a market town that must have felt hopelessly provincial and isolated before the rail era. The diaries record how other real people saw her. “When she was younger, she was abused,” says Wainwright. “People shouted at her in the street: does your cock stand? So I think by the time she was the age she is in Gentleman Jack, she’d built a real shell around herself to protect against that. The way she walked, you just knew not to mess with her.” 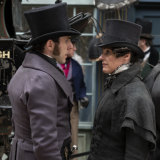 The story is told with a defiant disregard for the conventions of period drama; Suranne Jones, radiating androgynous energy, often turns from her period setting to address the camera directly, as if she had chosen to dish us the dirt rather than confining it to a diary. “The way Sally writes period is like you’ve never seen it before,” says Jones. “It’s fresh; it’s edgy; it dares to be funny. It feels like real people.” Both Lister and Walker are difficult women, often unlikeable; when we first meet Ann Walker, she is a neurasthenic wreck. It is patently clear that when Lister starts courting her, she is mostly interested in her money.

“She only went over there in the first place because she was this rich bit of local totty and she was bored. But I love that,” protests Sophie Rundle, who plays Walker. “We’re not trying to romanticise it in some big, sweeping period drama. And I think Anne Lister was taken aback by the reality of her feelings for her and how genuine they were. It was a rebound thing, but that’s often when these things happen, isn’t it: when you’re a bit exposed and vulnerable?”

In 1834, the two women exchanged vows and rings while taking communion in a local church, Holy Trinity, which is now decommissioned. A plaque outside commemorates “Anne Lister, gender non-conforming entrepreneur” and her extra-legal union. “Anne’s relationship with God was very easy,” says Anne Choma, consultant historian on Gentleman Jack, as we walk around the grounds she landscaped. “She had reconciled her belief with her sexuality. She was a very privileged woman but also had the courage of her convictions. She believed in consulting her own happiness. Really, it was all about that.”