Many things can be true at the same time, a concept that first-time feature director and long-time horror scribe Simon Barrett tries to tap into with his debut “Seance.” It hints at the possibility of two ghosts within its first five minutes and the twinned ghost stories soon expand to involve all manner of other horror-centric tropes: a creepy boarding school, a mysterious new girl, a shy new friend with (maybe) a secret, even a handsome outsider who loves to lurk — along with the usual assortment of flickering lights, bloody visions, and a basement filled with archival material that might hold some answers. “Seance” doesn’t just grow more mysterious, gory, and spiky as it goes on, it also grows more convoluted. Yes, many things can be true at once, but “Seance” might benefit from being pared to a more streamlined story.

Barrett’s film hints at the sleeker, darker film underneath his many genre fixations; it also sets up the possibility of a followup that could better tap into those ideas. “Seance” works best when viewed as a prequel to another film, one with a mythology that Barrett only bumps up against in this one (and one that, unfortunately, can’t receive more than oblique reference here; unpacking it would mean major spoilers for the film at hand). While this film’s trappings are horror — including a snappy opening that leads hard into “Bloody Mary” mythos — elements that are less straight-scary offer something new.

Edelvine Academy for Girls may or may not be haunted by a dead former student, but what matters more is the legend. It’s even inspired a silly activity among the students: Speak an incantation in the bathroom in which she allegedly died, at the exact time she shuffled off this mortal coil. Say it with enough verve, and the ghost will rise; for resident mean girls Alice (Inanna Sarkis), Yvonne (Stephanie Sy), Lenora (Jade Michael), Bethany (Madisen Beaty), and Rosalind (Djouliet Amara), the scary process allows them to pull a prank on more fragile fellow students.

On the night “Seance” opens, the prank has real consequences. Once fellow student Kerrie (Megan Best) apparently kills herself after trying to summon the spirit of the ghost, the students can’t pass off the old legend as the only creepy thing at their posh boarding school. On the other hand, whip-smart Camille Meadows (Suki Waterhouse), who has long languished on the school’s waitlist, now has a place at Eveldine. Good for you, Camille! 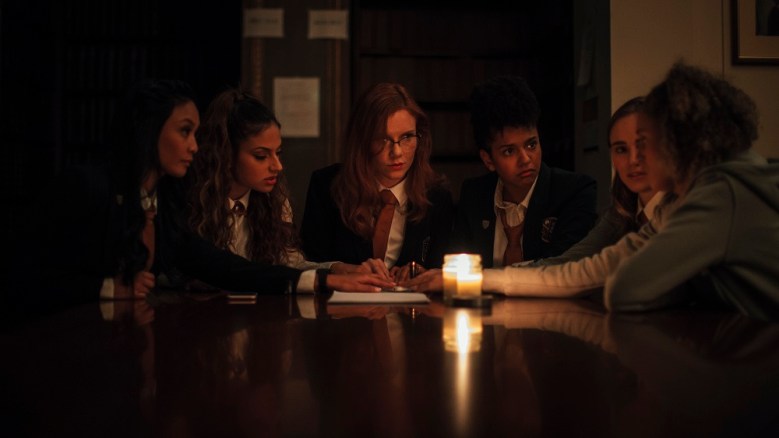 Camille is sensible enough to ask why there’s suddenly room for her at Eveldine, even if her stoic manner doesn’t reveal how she feels about taking the spot left open by Kerrie’s death — down to the dorm room where she threw herself out the window. There’s something off about Camille, who doesn’t seem at all bothered by the politics of the other students (Alice, Bethany, and pals are committed bitches who barely take the time to mourn Kerrie). Within hours of her arrival, Camille even throws down in a full-fledged fistfight with said bitches, a brutal affair that packs a serious punch (a hair-pulling catfight, this is not).

The fight does lead to some real consequences: Camille, her shy new pal Helina (Ella-Rae Smith), and the mean girls must all attend detention together, during which they will a) archive some old Eveldine material and b) probably get into more fistfights. Inevitably, given both the title of the film and the girls’ predilections, detention time leads to seance time as they attempt to reach Kerrie and get some answers.

Shortly, we see Alice’s group winnowed down by an unseen baddie — lots of jump scares, followed by lots of gory deaths — and Kerrie begins appearing to Camille. The possibility that this is all some ghost-y thing begins to fade, forcing everyone (especially Camille and Helina) to go looking for a corporeal villain. Barrett is no stranger to stories that meld and blend outsized terrors with human horrors, having written the scripts for long-time collaborator Adam Wingard’s modern genre classics like “The Guest” and “You’re Next.” The filmmaker knows his way around the tropes and treats of the horror film, and while “Seance” is rife with them, they also threaten to obscure the film’s more compelling ideas.

Classic chiller elements — the ill-fated “Bloody Mary,” a crudely drawn blood cross, bitchy teens marked for death, and one of the grossest deaths to hit the big screen this year — it’s all fun enough. However, the bigger mythology surrounding Camille and her arrival, one that lurks just outside of nearly every frame, is far more thrilling. It is also, oddly, one less beholden to the grammar of horror films (again, no spoilers, but consider “The Guest”), hinting at a fresh future for Barrett as a director.

An RLJE Films and Shudder release, “Seance” will be available in theaters and on digital and VOD on Friday, May 21.

As new movies open in theaters during the COVID-19 pandemic, IndieWire will continue to review them whenever possible. We encourage readers to follow the safety precautions provided by CDC and health authorities. Additionally, our coverage will provide alternative viewing options whenever they are available.