“Believe it or not,” Dr. Jean Milburn tells an acquaintance during Season Three of Netflix’s high school comedy Sex Education, “I don’t think everything comes back to sex.”

This is an interesting statement from Jean (Gillian Anderson), a therapist specializing in sexual relationships, who is among the most sex-positive characters ever to appear on television. And it’s also notable coming from Sex Education itself, which very much lived up to its title in its marvelous debut season before focusing more on relationship melodrama than matters hormonal in its disappointing second year.

But Jean’s comment isn’t her way of diminishing the importance of sex — nor the series’ way of moving away from its titular theme. While Jean herself is largely focusing on other issues — she is in the late stages of pregnancy when we return, and spends much of the year either trying to patch things up with ex-boyfriend Jakob (Mikael Persbrandt) or farting up a storm(*) — Sex Education Season Three manages to find a very healthy balance between the emotional and sexual components of human relationships.

(*) There remains a tremendous dignity to Anderson’s performance that only makes Jean’s chronic flatulence funnier than if she were less couth.

The season opens with a sex montage. First, we see our hero (and Jean’s son) Otis (Asa Butterfield) fooling around in a car with a classmate. Next comes a parade of couples of various ages, sizes, sexual identities, and fetishes finding ways to satisfy their urges. Season Two wasn’t exactly chaste — much of this year’s plot, in fact, involves new head teacher Hope (Jemima Kirke from Girls) being brought in to repair Moordale Academy’s scandalous reputation as “the sex school” — but it still feels reassuring to be thrown back into the frank, raunchy territory where the series is at its best.

Season One focused mostly on Otis and class rebel Maeve (Emma Mackey) running an underground sex clinic to help their classmates deal with problems the teachers didn’t want to discuss. The clinic idea gave the show structure and specificity. Otis and Maeve spent much of Season Two estranged and shying away from the clinic, and the emphasis was more on a series of misunderstandings, poor timing, and outright chicanery that kept preventing the two from hooking up with each other. This was all stock soap-opera stuff, up to the concluding moment where Maeve’s new friend Isaac (George Robinson) deleted a voicemail message where Otis finally professed his love for Maeve.

That was nearly two years ago, and while the pandemic delayed production on a show that requires a lot of actors to work in extreme physical proximity, it also appears to have given creator Laurie Nunn the time to recalibrate a bit. Season Three still has plenty of breakups, hookups, and other relationship turmoil. And Otis for the most part remains out of the bootleg sex-therapy business, fearing he has hurt too many people in the past to be offering anyone advice. But these new episodes manage to talk about sex early and often, taking advantage of what’s turned out to be a deep and versatile young ensemble to cover the subject, even while Otis and/or Maeve are dwelling on other problems. 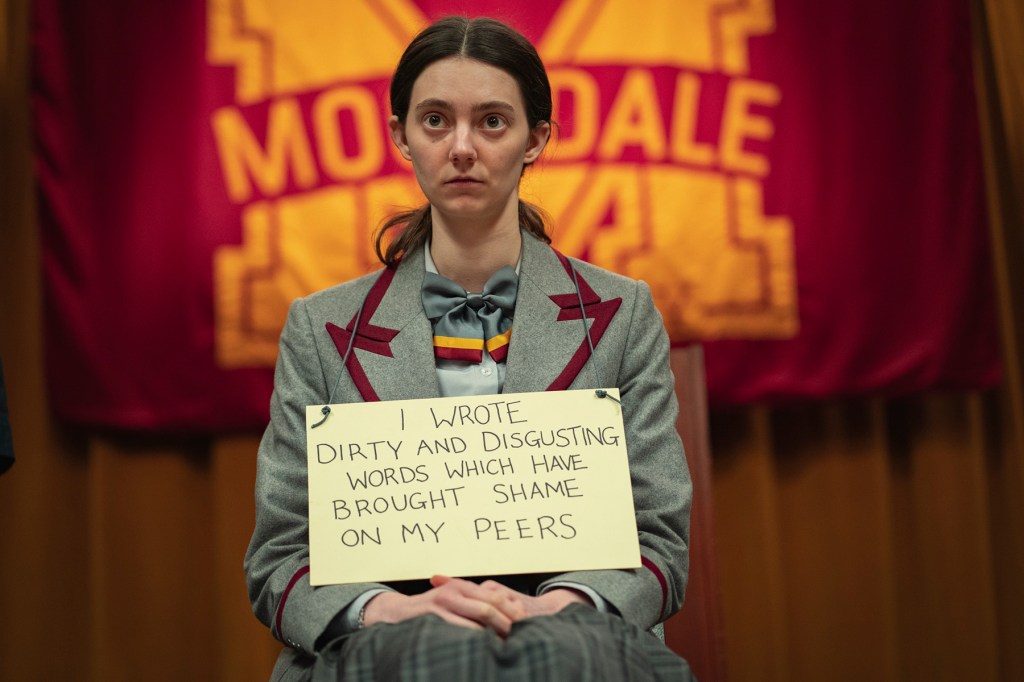 Hope essentially turns out to be a younger and more glamorous Dolores Umbridge, here to get these unruly children under control at any cost. The writers and Kirke give her more shading than that(*), but as Hope introduces drab school uniforms and shame-inducing abstinence-only sex ed classes, it creates an effective source of conflict, not just between her and the students, but among the students themselves. Former star athlete Jackson (Kedar Williams-Stirling), for example, is concerned about the changes, while studious Viv (Chinenye Ezeudu) looks at them as a chance to pad out her resume. And the newfound push for conformity drives a wedge between Ola (Patricia Allison) and her alien-tentacle-porn-writing girlfriend Lily (Tanya Reynolds).

(*) Less nuanced and mostly wasted: Jason Isaacs, who appears sporadically through the season as the rich and obnoxious older brother of Hope’s predecessor, Michael Groff (Alistair Petrie). It’s a one-note character too far removed from the main action to be worth bringing in Isaacs.

The season also lives up to that opening montage by continuing to explore a variety of identities and experiences related to sex and/or gender. Jackson develops a crush on Cal (Dua Saleh), a new student from America who is nonbinary, and it’s smartly established that Cal isn’t the only nonbinary member of the class, so that they don’t have to represent an entire community. Isaac has a spinal cord injury and uses a wheelchair, and one subplot explores what does and doesn’t work for him sexually. Maeve’s best friend Aimee (Aimee Lou Wood), still dealing with being assaulted by a stranger last season, gets a lesson from Jean in the wide varieties of vulvas, while Otis’ best friend Eric (Ncuti Gatwa) and his boyfriend Adam (Connor Swindells) have to figure out who’s the top and who’s the bottom as their relationship grows deeper.

All of it is handled with an impressive blend of sensitivity and humor. Sticking with the series’ retro vibe, one episode feels like a condensed version of an Eighties or Nineties teen-sex comedy, as a class trip to France goes awry due to a clogged toilet and an unconventional use of a sock. And then the very next installment spends much of its time with Eric(*) as he travels to Nigeria for a family wedding and gets a taste of what it’s like to be gay in a more repressive environment. The two travel stories — one broadly silly, one thoughtfully reserved — should have no business appearing back-to-back, yet it all works together, because the storytelling is so assured.

(*) Eric remains the best and most vivid character the series has introduced, to the point where I’ve now mostly let go of my frustration that he was paired off with Adam, who was introduced in Season One as a bully who relentlessly tormeted Eric. Their stories this year, both together and apart, work very well.

It would be nice to have Otis and/or Maeve more directly involved in what’s happening at the school, but their various conflicts (involving one another as well as their respective families and love interests) are emotionally effective in their own right. On the whole, it’s a very satisfying bounce-back year that suggests Sex Education would still have stories to tell in a fourth (and, given the characters’ ages, presumably final) season.