If the latest episode of HBO’s Lovecraft Country felt a little more fabulous than usual, it may have had something to do with an appearance by esteemed drag queen Shangela, who opens up to ET about serving Lena Horne realness and acting alongside some of Hollywood’s biggest names.

In what was the hit horror series’ most ambitious and provocative episode yet, Shangela (also known as D.J. Pierce outside of drag) appeared as one of several drag queens that are preparing for a pageant at local underground Black queer club, where Montrose (Michael K. Williams) has a metamorphosis of sorts.

Squeezing an audition in between her many touring gigs, the RuPaul’s Drag Race alum and performer was excited to learn that she was going to be a guest star in episode five, “Strange Cases,” written by creator Misha Green with Jonathan Kidd and Sonya Winton and directed by Cheryl Dunye.

“And then being on set really was a dream come true,” Shangela says of arriving at the Georgia-based filming location, where she learned that she would be appearing alongside longtime friends, fellow RPDR alum Monet X Change and Noah’s Arc star Darryl Stephens. “It wasn’t even like work, it was like a fun kiki.”

In addition to guest star Jon Hudson Odom as Montrose’s lover Sammy, who dons Sarah Vaughan drag, the trio of performers were each assigned to a Black female star of the era to impersonate: Lena Horne (Shangela), Dinah Washington (Monet) and Billie Holiday (Darryl). “I was thrilled because I always thought Lena Horne was such an icon of beauty and talent,” Shangela says, revealing that she worked with the wardrobe department on the gown that she got to wear during the pageant scenes, where Montrose comes to accept himself and embrace his surroundings.

The Hair and Fashion journey for my Lena Horne-inspired drag character on @lovecrafthbo 👗 shout out to the wardrobe stylist @daynapinkthings, my gown designer @angelayalacouture and hair pro @brianbadiehair for the Lewks! I learned a lot in researching drag queens from the 1950s and really loved how they incorporated our world into the scenes.

The Hair and Fashion journey for my Lena Horne-inspired drag character on @lovecrafthbo 👗 shout out to the wardrobe stylist @daynapinkthings, my gown designer @angelayalacouture and hair pro @brianbadiehair for the Lewks! I learned a lot in researching drag queens from the 1950s and really loved how they incorporated our world into the scenes.

The scene ends with drag queens lifting him up into the air as glitter comes raining down. “It was nice to see this character kind of find his freedom in this space,” Shangela says of the moment, before recalling watching Williams in between takes and “seeing how he embraced this character.”

She adds, “He just had such a deep history that he brought to this character and it made us all want to pull a little deeper to be better characters as well.”

It was also a learning experience for Shangela, who was happy to see a series like Lovecraft Country showcase “this slice of LGBTQ and queer life in that era.” While there are increasingly more and more queer narratives depicted on screen, “we don’t see a lot of representation of what queer life was like [pre-Stonewall],” she continues. “And honestly, it was an education for me, too. I didn’t realize that these types of events happened in such a fabulous way. Of course, they had to be so secretive and kept on the low.”

It was a stark reminder at times of far and how little LGBTQ rights have come in America and around the world. “We should just honor those who had to live a different life, a more difficult life in a more challenging time, but still sound a way to live,” Shangela says. “Finding out about these clubs was the most special thing to me. I was like, ‘Wow, they’ve been doing this for longer than I thought.’”

But in keeping with the times, Shangela wasn’t allowed to use her trademark, “Halleloo.” She recalls Dunye telling her at one point, “Hold on now. They don’t say that.” 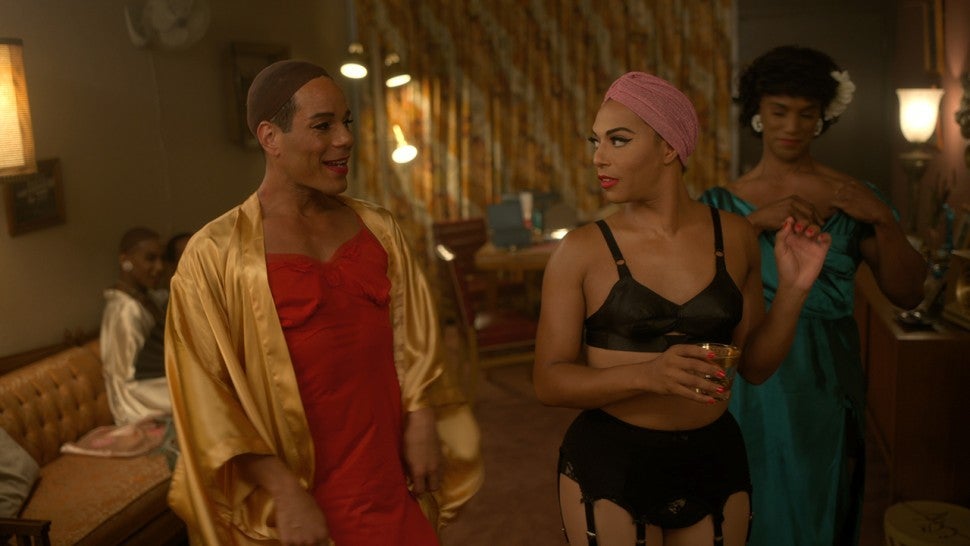 When it came to having Shangela and Monet on set, Dunye couldn’t have been happier. “It was so magical having stars of RuPaul’s world,” she says, adding that they brought a natural authenticity to the story and scenes. “I want this to be real. I want this to be truthful… so I got people who were real and truthful and represented the culture.”

And Shangela was just as in awe of Dunye, who’s a cult icon in the filmmaking world known for the 1996 movie The Watermelon Woman. “One thing that I was so proud of was to see a Black queer director in charge,” she says. “It made me so proud as a fellow member of the community to see one of us doing it and do a great job at it.”

For Shangela, who is also the host of HBO’s Emmy-nominated transformative series We’re Here, this episode is the latest in supporting and scene-stealing roles she’s collected in the decade since first competing on RPDR. She’s appeared in 2 Broke Girls, Broad City, Community with Chevy Chase and Glee. And prior to Lovecraft Country, she most recently appeared on The CW series Katy Keene starring Lucy Hale. “I got my life so much in bringing my character ‘Deveraux’ to life,” she wrote on Instagram earlier this year.

Of course, her most notable acting credit is alongside Lady Gaga in the 2018 film, A Star Is Born, bringing authenticity to the drag club scenes, where Gaga’s Ally is discovered by Bradley Cooper’s Jackson.

“I shot all of my scenes probably in a total of four days but they were so phenomenal in creating this amazing, inclusive, nurturing environment that they were all like, ‘Alright, we’re here to work and let’s do this,’” she previously told ET about her experience on set, adding that Cooper and Gaga “made everyone else feel like, ‘If they’re gonna give a hundred, I’m gonna do the same thing.’”

There are only so many times, however, Shangela can play someone’s drag sister in a film or TV show. When asked if it’s time someone gives her a proper role in a project, she just says she’s so “thankful to be working with some fun people right now and hopefully bringing some more characters to life.” And hopefully more layered experiences that go beyond the drag scene in addition to a second season of hostingWe’re Here.

But she quickly adds, “Yes, Shangela wants to work and she wants to continue to work in television or film. Tell everybody, okay? And hopefully soon she’ll have an Emmy nom or something to walk alongside her.”