It’s reassuring to know that, even a thousand years in the future, cats still rule the universe.

Star Trek: Discovery returned for Season 3 this week with a massive time jump that “cat”-apulted Burnham centuries forward into the year 3188, where she met charming smuggler Book… and his beloved cat Grudge. (“She’s heavy… and she’s all mine,” he proudly told Burnham.) As much as we marveled at the 32nd-century technology and all the new gizmos, Grudge was definitely the highlight of the premiere for us — and we’re not alone, apparently.

“Grudge is an absolute hit,” Discovery executive producer and co-showrunner Michelle Paradise tells TVLine with a laugh. “I think Grudge is everyone’s favorite new character… Everyone, of course, wants to be on set on the days when we’re shooting the cat. Including me.” 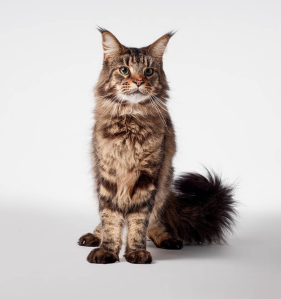 Grudge may be a female, but she’s actually played by a pair of Maine Coon brothers, Leeu and Durban, who are making their screen debut on Discovery. Grudge is poised to be Season 3’s breakout star: She already has her own Instagram account, naturally, and we’ll definitely see more of her as the season goes on.

“Grudge is Book’s first lady love, and we will be seeing a fair amount of Grudge this season,” Paradise confirms. “We won’t overplay Grudge, but Grudge is an important part of Book’s life, and is with him on his ship. We will be seeing Grudge again.”

The Star Trek universe has a rich history of feline guest stars, of course: Kirk and Spock fended off a shape-shifter that took the form of a black cat in the original Trek series episode “Catspaw,” and Next Generation‘s android officer Data had a pet cat named Spot. So Grudge is just carrying on the great tradition of Trek cats — and Paradise is ready for an incoming wave of Grudge stans.

“Everyone is going to be overshadowed by Grudge at conventions,” she predicts. “No one’s going to want [series star] Sonequa [Martin-Green] anymore. It’s just going to be, ‘Where’s the cat?’”