Home » 'Star Wars: 1 Naboo Scene Was Originally Too Inappropriate Due to Improvising From Natalie Portman and Hayden Christensen

Star Wars is, of course, a franchise for children but it’s grown so much more than that. It has amassed a huge following, and that’s a massive understatement. Because of that, there are, of course, a ton of strong opinions that are attached to the movies and characters, and a lot of them have to do with whether or not the prequel films are good.

Regardless of your opinion on them, it’s safe to agree that some dialogue is definitely a bit stilted, to say the least. And Natalie Portman revealed that that almost changed. However, thanks to the rather inappropriate nature of her and Hayden Christensen’s improvisations, they had to edit it out in Attack of the Clones.

Natalie Portman said that George Lucas encouraged improvisation between her and Hayden Christensen, but it got a bit ‘inappropriate’

In Star Wars: Episode II — Attack of the Clones, Padmé Amidala and Anakin Skywalker are reunited after a decade apart, but she still sees him as the child she first met in The Phantom Menace. That starts to change when he’s put on a mission to protect her and they head to Naboo for her safety and anonymity. There, they start to get closer. And one of those scenes involved improvisation that a little too out of line.

The scene in question is when Padmé and Anakin are talking at lunch and he uses the Force to cut some fruit to feed to her. According to The Best of Star Wars Insider Volume 8: The Saga Begins, which is an collection of Star Wars Insider magazines throughout the years, Portman said there were parts of that scene that were improvised prior to the final cut of the movie.

“I don’t think George [Lucas] was satisfied with the dialogue he had written, because he told Hayden and me to just improvise — which was amusing, because it got inappropriate, very quickly,” she said. “It was a fun scene to shoot, although we felt pretty stupid biting fruit, which didn’t exist, out of the air.”

But Lucas stands by his dialogue, despite encouraging that improv

Of course, the final cut is very PG. It’s unclear what was so “inappropriate” about the content. Was it was too steamy? Or just too silly? We’ll never know unless Lucasfilm decides to go all Snyder Cut on Star Wars fans.

But, regardless, the final version is just the dialogue that was written or Lucas-approved improv. And speaking of prequels dialogue, that’s a big debate and talking point on its own. Episodes I — III are harped on for being a bit silly at times for their lines, but Lucas has stuck by his writing.

“It is presented very honestly, it isn’t tongue-in-cheek at all, and it’s played to the hilt,” Lucas said about Attack of the Clones’ dialogue in The Star Wars Archives 1999-2005 according to NME. “But it is consistent, not only with the rest of the movie, but with the overall Star Wars style. Most people don’t understand the style of Star Wars. They don’t get that there’s an underlying motif that is very much like a 1930s Western or Saturday matinee serial.” 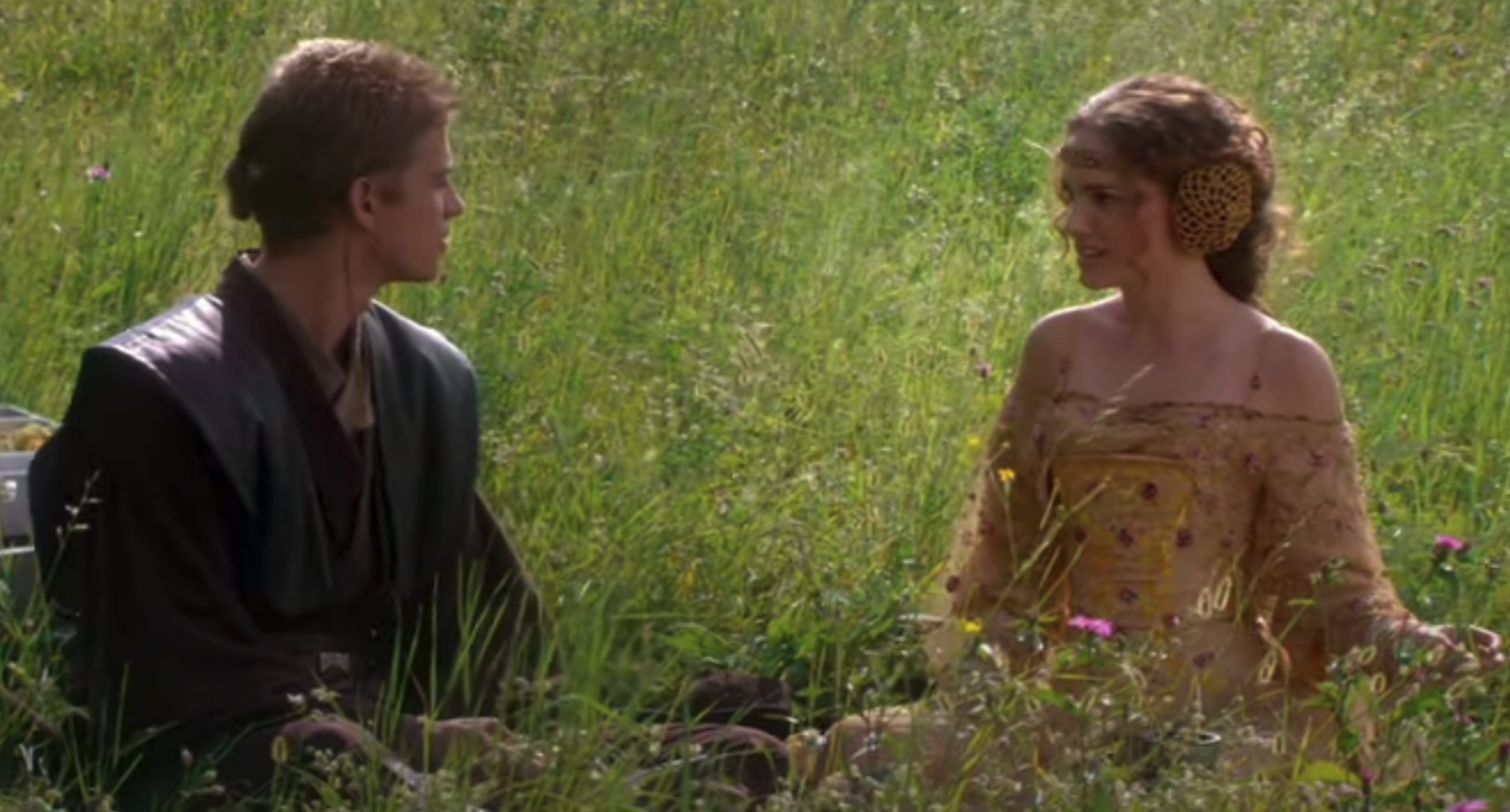 As stated before, Star Wars is essentially for kids. So the dialogue can’t be too heavy or hard to understand. So griping about sand the way Anakin does makes a bit more sense when you think about it that way. But even so, Lucas has a point about style, because say what you want about Attack of the Clones and the rest of the prequels, but you can’t say they’re not consistent.

Lucas also said that the romance and adventure aspect of Attack of the Clones, specifically, lends to the melodrama of the movie. This makes it more of a “soap opera” and, well, we all know how their dialogue goes.

Years later, Portman revealed that she was bummed that the prequels were so ill-received at the time

Regardless of the method behind the madness, for years Attack of the Clones and the other two prequel films were disregarded by a lot of fans or critiqued heavily. This bummed Portman out.

“It was hard. It was a bummer because it felt like people were so excited about new ones and then to have people feel disappointed,” Portman told Empire in 2019. “Also to be at an age that I didn’t really understand that’s kind of the nature of the beast. When something has that much anticipation it can almost only disappoint.”

If you were to ask older fans a decade ago if they liked the prequels, they probably would have said, “No.” But there’s been a big resurgence of love for the prequel trilogy of Star Wars, and that’s in large part because the children the movie was made for in the early 2000s are growing up and are more vocal about loving it.

Portman’s seen this too. She said the prequel trilogy has been able to have a new life with people again and with the kids at the time who grew up to be adults who love them now. And she loves to see that today.

“With the perspective of time, it’s been re-evaluated by a lot of people who actually really love them now,” Portman said. “There’s a very avid group of people who think they’re the best ones now! I don’t have enough perspective to weigh in.”