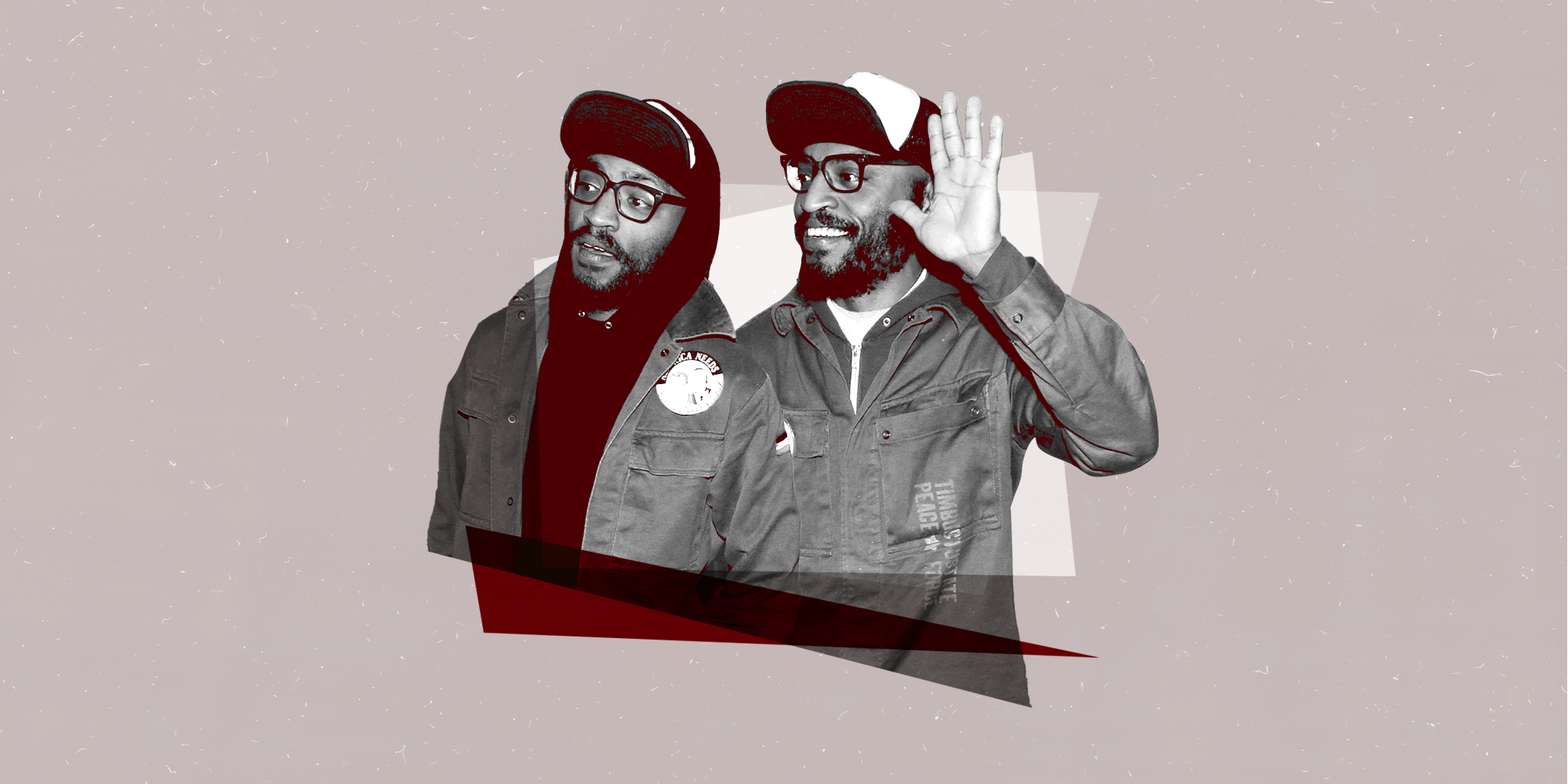 An FBI informant drugs an activist and gives the floor plans of the target’s house to local police. Police fire nearly 100 bullets into the home. The surviving activists—including the target’s pregnant partner—are beaten, dragged out into the street, and charged with attempted murder. As a novelist, if I were to write this story, editors would say it was not believable. Yet these are facts from the 1969 assassination of Fred Hampton, just one story of COINTELPRO, the FBI’s counterintelligence program against the Black Panther Party.

As the current call to defund police is nudging some “copaganda” shows off the screen, it’s making room for other stories—including those that expose horrific histories of police violence. Judas and the Black Messiah, which chronicles the FBI informant career of William O’Neal and his role in Hampton’s murder, is one of those stories.

Ahead, I speak with Keith and Kenny Lucas, the writers and producers of the film, about its production and creation, exploring the PTSD that comes from living and working in a racist society and how their relationship as twins provides a unique perspective on the perils and machinations of toxic masculinity.

This story has been waiting to be told for more than 50 years. Can you talk about the process of adapting it for film?

Keith: We stumbled across this interview from William O’Neal in the ’80s from Eyes on the Prize, and we were just blown away by how cinematic it felt.

Kenny: Getting it made was challenging. Then in 2016, we got a chance to work with Shaka [King] on a pilot for FX. So we pitched him our idea, and he really loved it.

Because Judas is a story of the U.S. government crushing a people’s movement, it has the danger of landing as tragedy. There’s been criticism lately about the cultural preoccupation with Black tragedy and trauma.

Kenny: We were aware of the dialogue happening regarding Black trauma, but we felt that the necessity of having a film about Fred Hampton outweighed any concerns.

What were your thoughts about how to handle gender dynamics [in the Black Panther Party]?

Kenny: I know there were serious issues with the treatment of women in the Oakland chapter.

Keith: It’s always tricky because the two main protagonists are men, but in the Illinois chapter, especially with Fred Hampton [as chairman], he was committed to making sure that women were treated equally.

Was the character of Captain Judy Harmon an actual historical person?

Keith: She was more of a composite. Based on our research within that era, there were multiple women who picked up arms, and Fred had a lot of faith in women’s leadership.

Kenny: I think [the female characters] take the movie to the next level, because you see the nuances of the Black Panthers. It wasn’t just Black dudes in leather jackets with guns storming Capitols.

Speaking of storming the Capitol, in light of the violence the Panthers faced for being armed or resisting police violence, can you comment on the recent insurrection at the Capitol in Washington, D.C.?

Kenny: When you study American history in general and race relations in particular, stuff like this never really shocks me. The [insurrectionists] were so public about their intentions, and the intelligence community did nothing to really quell it. But when it comes to Black civil rights, there’s this repressive reaction when we talk about freedom.

Keith: On one hand, I’m not surprised at all, but on the other hand, it’s troubling. Racism is always troubling.

Kenny: I don’t think it’s a coincidence that on the day that Georgia elects its first Black senator and its first Jewish senator, you have a bunch of angry white guys storming the Capitol. Whenever you see Black progress, you always see white backlash.

Keith: It’s just the same story being told over and over. Hampton being assassinated in his bed, and then you have Breonna Taylor being killed in her home.

Kenny: And when you talk about this stuff, you always have a group of people like, “We don’t want to talk about race.” But Black people have to talk about it, because we’re the ones being affected.

We think about this all the time. How did we avoid the toxicity of masculinity?

Hampton was assassinated because of his effectiveness at uniting folks from different communities. Can you talk about the Black Panther Party and their critique of capitalism?

Keith: Hampton was a committed Marxist. He was anti-capitalist, anti-fascism, and [anti]-racism. And the great thing about Fred is that not only did he have these ideas, but he was able to turn it into organizing.

In the film, the FBI attempts—and fails—to copy Black speech in one of their disinformation campaigns. I have to ask, was “dig-in” real?

Keith: [Laughs.] That was artistic license. But they did certainly manipulate pamphlets. To me, it was funny to think about a group of white guys sitting in a room writing as Black people. I mean, I guess it’s true of Hollywood too.

Keith and Kenny: [Both laugh.]

So I want to shift gears a bit. I see you two as being part of a new generation of Black men who are opening up about trauma and PTSD in our community.

Keith: We’ve seen the negative side effects of this masculinity. In order to finally confront it, we talked to a therapist, and that just opened up a new world for us of being more honest and vulnerable and not sugarcoating the impact that growing up in a racist white society can have on you. And it’s not just Black men. Black women have always been way more open, and I think we’re finally taking cues from Black women to talk more about our issues.

Kenny: We’ve tried masculinity and stoicism, and it hasn’t worked, so I think it’s to be honest about the things that we’re afraid of.

Kenny: That was one of the greatest questions we’ve ever been asked.

Keith: We think about this all the time. How did we avoid the toxicity of masculinity? It is related to the fact that we’re identical twins. From birth, we’ve basically been seen as equivalent to babies or puppies. I never developed this ultra-macho ideology, because I always had another guy that looks exactly like me.

Kenny: Yeah, we were never defined by our masculinity. No one would ever mistake us for bullies, because we just look the same.

Keith: Could you imagine that? Trying to be tough twins? You’d get laughed at!

Kenny: Our dad was hypermasculine and violent. And he’s like, “How are you guys my sons?” And I’m like, “We are. We just aren’t like you.” That’s actually the premise of a movie we’re working on, about how he became this very toxic masculine guy and how we became sort of the complete opposite.

Keith: But also shout-out to our mom. She just instilled in us very early that we had to have respect for women and just see people equally.

You talk about how the drug wars shaped your family and your own substance use. There’s been a fight for decades for medical cannabis because it can help with many things, including managing trauma. But cannabis can also make it hard to be productive or impact the quality of work. What advice do you have for creatives who are trying to figure out how to manage their relationships to substances?

Kenny: I do believe there are situations where—if you manage it—it can have therapeutic benefits. That’s most psychedelics—marijuana, mushrooms. Where I kind of draw a line is with alcohol—especially if you have an addictive personality. It’s been such a disaster for Black communities. It’s better if you try to manage your trauma without substances, because when you rely on substances, it’s just numbing the pain, and it’s gonna rear its ugly head again. So I feel like the proper approach to trauma is therapy and get[ting] to the root of the problem. But I believe marijuana should be fully legalized.

The final question I have is what’s next?

Keith: We’ve been working on a lot of projects. We have this movie, which is autobiographical, and it’s touching on toxic masculinity and substance abuse. We also just recently closed a deal to work on a new Revenge of the Nerds. We intend to direct at some point. And we also want to write a book.