Spoiler alert: The following contains details from the “The Me You Can’t See,” now streaming on Apple TV+.

Prince Harry, Lady Gaga and Oprah Winfrey are opening up in the mental health series “The Me You Can’t See,” now streaming on Apple TV+.

They royal and celebrated talk show host serve as executive producers of the five-part series and have conversations about their own experiences throughout the episodes. The series also feature news-magazine style pieces that profile celebrities and athletes like Oscar-nominated actress Glenn Close, professional basketball player DeMar DeRozan, boxer Virginia “Ginny” Fuchs and the son of the late comic Robin Williams, mental health advocate Zak Williams.

Here are just a few of the moving moments from the series.

From ‘Mythic Quest’ to ‘Ted Lasso’: How Apple TV+ became one of the best streaming services

Prince Harry says that Duchess Meghan's suggestion he look into therapy convinced him to see someone. (Photo: BEN STANSALL/AFP via Getty Images)

Meghan told Harry ‘I think you need to see someone’

The royal says in the series’ second episode that he knew if he didn’t go to a therapist, he would lose wife Meghan, whom he wed in 2018.

“When she said, ‘I think you need to see someone,’ it was in reaction to an argument that we had,” Harry remembers. “And in that argument, not knowing about it, I reverted back to 12-year-old Harry,” the age he was when his mother, Princess Diana, died as a result of a 1997 car crash in Paris.

In the show’s premiere, Harry says he was enraged by the circumstances of his mother’s death and “the fact that there was no justice, at all.” “The same people that chased her into the tunnel photographed her dying on the backseat of that car,” he says.

‘The More Me You Can’t See’: Prince Harry said he turned alcohol and drugs to cope with a ‘nightmare’ time in his life 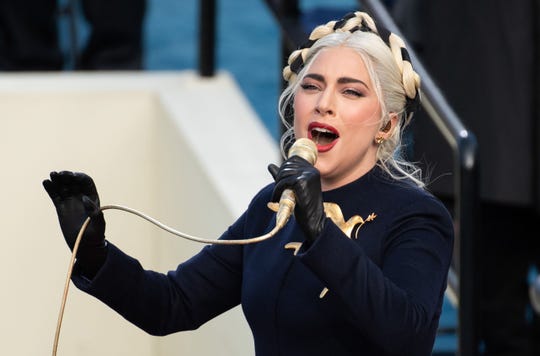 Lady Gaga is among the celebrities to share their mental health challenges in Apple TV+'s "The Me You Can’t See." (Photo: SAUL LOEB, POOL/AFP via Getty Images)

In the series debut, the Grammy and Oscar-winning singer remembers being 19 when a producer threatened to burn her music if she didn’t take her clothes off.

“They didn’t stop asking me, and then I just froze, and I just – I don’t even remember,” she recalls, crying. Gaga, now 35, says she did not feel comfortable naming her assailant. “I do not ever want to face that person again,” she says.

As a result of the trauma Gaga says, “I had a total psychotic break, and for a couple years I was not the same girl.”

‘I had a total psychotic break’: Lady Gaga talks trauma of being raped in ‘The Me You Can’t See’

‘Tears of joy’: Elliot Page gets emotional in first TV interview with Oprah since coming out

Oprah Winfrey speaks candidly about her childhood trauma in the Apple TV+ series, for which she and Harry are executive producers. (Photo: Steve Jennings/Getty Images)

Oprah’s childhood: ‘I knew I was alone’

The famed talk show host says in the series premiere the only trauma from her life that still causes her to weep is the wound of going to live with her mother as a child after previously being raised by her grandmother.

Winfrey says her mother was living in the house of someone who was “very light-skinned” who mistreated Oprah because of the color of her skin.

“That very first night, she wouldn’t let me come in the house,” says Winfrey. “There was a little porch foyer that was exposed to the street, and I had to sleep out there on a sofa.”

Winfrey says when her mother didn’t protest, “In that instant… I knew I was alone.”

‘The Me You Can’t See’: Oprah talks about being molested as a child, breaks down in tears